Pretty much everything but agricultural commodities has moved higher over the past two months. Stocks are up. Oil is up. Gold, Bitcoin, and high-yield bonds are all up. But the “ags” haven’t done anything.

That’s about to change.

DBA bottomed in late April, right after we first turned bullish on agricultural commodities. And, for the past several weeks or so, the stock has simply chopped back and forth in a relatively tight trading range. This choppy action has provided enough time for all the various moving averages to decline towards the current price of the stock.

You can now see that all the moving averages are coiled together. This is the sort of action that builds up energy for a stock’s next big move.

DBA crossed above all of its moving averages last week. This sort of “bullish cross” often marks the start of a new rally phase.

Some slight weakness in the stock yesterday allowed DBA to drift lower and test the moving averages as support. If support holds, then DBA should start to rally again within the next few days.

DBA is a slow mover. Agriculture prices usually don’t change all that fast. But, this is a good-looking, low-risk setup. If DBA can pop above the April high of about $13.90, then we could see a quick rally up to the next resistance area just below $15.

P.S. Buying DBA shares today could probably lead to a 5-10% gain in the coming weeks, as this pattern plays out. But, if you’re looking for a way to add a little “pop” to an otherwise conservative trade, you might consider buying call options on DBA instead.

That’s why I created my introductory options trading advisory, Jeff Clark Trader. By learning to use options the right way, you can end up making more when you’re right – and losing less when you’re wrong.

In fact, options can turn a 5% move in the underlying stock into a much bigger move, in shorter time. Click here to learn more.

In today’s mailbag, Charles and William share their opinions on the current market…

Jeff, the reason I keep insisting that the stock market is manipulated is because of the embarrassment in the Oval Office. Trump’s only concern is his own re-election. He’ll do whatever is necessary to keep the market up, and the economy open, no matter how many people die as a result.

Your technical indicators may be beyond belief at the moment, and I’m sure you don’t think a single individual can affect the market, but I feel strongly that he’ll order the Federal Reserve to go to 50% negative rates if that’s what it takes (yes, I’m exaggerating.) For all we know, he’s already got the Feds buying equities.

There’s nothing this disgraceful con artist won’t do to get another four years. And for some reason, most investment advisors, no matter how brilliant they are, seem to love this con artist, especially the Baltimore contingent. I think he should be forcibly dragged out of the White House, placed on a plane to Russia with orders to never return. Then maybe we can get back to being a free enterprise in this country, which is now a nation on the brink.

Jeff, I may have picked a bad time to start up with you. My first option trade is one of your recommendations, which looks like a total loss as of today, and then the GDX option still remains to be seen. But I’ve also bought a couple of your recent recommendations that show promise.

I’ve always been gun shy of people like you, and have only signed up for one other service which was with David Wiedemer, author of Aftershock. I let them handle my money for one year which was a bust. They made less than 4%, while my regular brokers at Edward Jones made good with me, and my play account both going up around 8%.

My play account has made 61% this year including the loss on XLK. I happened to be in all cash when the market fell in February and
I’ve made most of it by bouncing up with stop limits on HWC, my local bank, along with options of WFC, and a few more stock trades for short run-up following tight stop limits.

I look for idiot-proof investments in stocks that I don’t mind holding on if I have to. That’s why I’m interested in your philosophy since there are times when I’m in all cash and I’m not sure what to buy. I’m pulling for you to be the one.

Study this photo — it could change your life

What you see in this photo costs just $.10 to produce and is no bigger than a grain of rock salt.

And yet, this same tiny discovery could soon remap the U.S. economy, create millions of new jobs, and make millions of regular Americans very rich.

This is such a breakthrough, I’ve actually written to the president to request a meeting. I think I’ll get it too. Why?

Click here to read my letter and to find out. 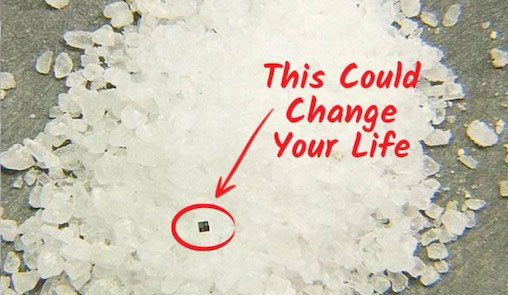