What the dollar decline giveth, a dollar rally can taketh away.

The dollar has fallen more than 7% over the past three months. That’s an enormous move for a currency – especially for the world’s “reserve” currency.

It’s a crash that has helped to support the price of so many other financial assets. That’s because, as the dollar falls, folks exchange their savings for other assets. They buy stocks, bonds, metals, commodities, cryptocurrencies, and just about anything else.

Just think about the action of all those assets over the past three months as the dollar has fallen. Stocks are up sharply. Treasury, corporate, and high-yield bonds have all rallied. Gold, silver, and copper have exploded higher. Bitcoin is higher than it has been in over a year. Agricultural commodity prices are breaking out to the upside.

And, much of that action is due to the falling dollar.

That means traders should keep an eye out for signs that the dollar collapse may be ending. Because when the dollar starts to rally, there’s a good chance the prices of other assets will start to fall.

Based on the look of the following chart, we may be approaching that moment… 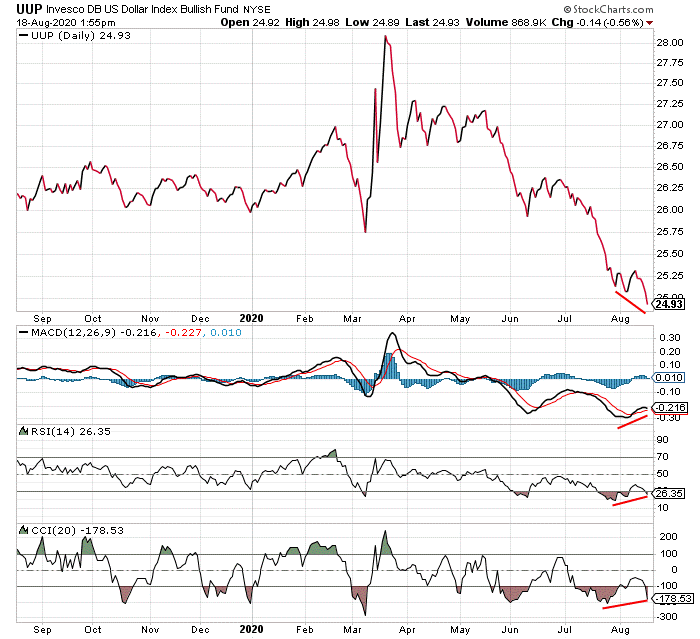 This is a chart of the Invesco DB U.S. Dollar Bullish Index Fund (UUP). It’s an exchange-traded fund (ETF) that tracks the price of the U.S. dollar.

You can see the dramatic decline over the past few months. And, you can see that while UUP was falling, all of the technical momentum indicators at the bottom of the chart were falling right along with it. That’s a sign that the downtrend was strong, intact, and likely to continue.

Recently though, on the decline to new lows over the past week, the technical indicators made higher lows. This is a sign that the downward momentum is fading. The decline is not as strong as it once was.

This sort of “positive divergence” in the technical indicators is often an early warning sign that the trend is ready to change direction. In the dollar’s case, that means we may be nearing a point where the decline ends and a new rally begins.

And, since the decline in the dollar has helped support the prices of so many other assets, a dollar rally may just have the opposite effect.

P.S. If you’re not familiar with using technical indicators to predict market moves, my 18-year old son Carson isn’t either… But, he will be soon.

This past summer, my son Carson took an interest in what I do and the life I’ve been able to provide for my family. So, I’m going to be teaching him the same trading techniques I’ve used to help me retire at 42. And, if he follows what I teach him, he’ll be able to mitigate risks… make consistent profits… and avoid the huge pitfalls most new traders fall into.

Join us next Wednesday, August 26 at 8 pm E.T., where Carson will try to double his money on a short-term trade after he learns all about my technique. Keep in mind… he has no prior experience, and will be risking his own hard-earned savings. I won’t be bailing him out if he fails, either.

I’ll also be giving away a free trade recommendation at the event, so you can try out my technique for yourself. Sign up right here.

In today’s mailbag, subscriber Dave shares his experience with FOMO (Fear of Missing Out)…

Hi Jeff, boy do I remember 1999 and the nuttiness going on. All my friends and family were buying every dotcom and widget company that supported those dotcoms. Many of them had never bought stocks before, including my mother-in-law. But, fortunately, I had a service at the time that used fundamental analysis. As much as I wanted to, I sat and watched. I was too chicken though to tell them I wasn’t investing in these dotcoms.

What I took away from that time was, if I get that FOMO feeling coming over me, it’s probably a good time to step back and take a deep breath. I owe a lot to you for that. Your way of trading as a process with rules has helped me quell the emotional (the hardest) part of trading. Thank you for all you do!