This month, I’ve been focusing on the foreign exchange trading market (forex or FX).

My analysis shows forex is currently the best asset class for active traders.

Right now, volatility is very high and this presents great opportunities for skilled traders to exploit.

Today, we’ll look at an opportunity in the U.S. dollar and Japanese yen currency pair (USD/JPY).

USD/JPY had a monstrous move this year, with the dollar appreciating over 21% relative to the yen.

It’s mainly due to the vast difference in monetary policy between the two countries.

On the one hand, the Fed is firmly committed to raising interest rates to bring inflation back under control.

On the other hand, the Bank of Japan (BOJ) has recently released a statement maintaining their commitment to ultra-low rates.

This divergence in policy has resulted in the yen weakening to levels not seen since 1998.

When there’s a large spread between the interest rates of two currencies, it’s usually a forex trader’s dream.

And that’s why many amateur forex traders were surprised when USD/JPY dropped by almost 1% on Friday… shortly after the BOJ reiterated its commitment to keeping rates low.

But here’s what’s really going on…

The market is essentially calling the BOJ’s bluff. They know that the BOJ can’t keep interest rates this low forever.

Eventually, they’ll have to succumb to the same inflationary pressures that have driven the U.S. Fed to change course and start hiking rates.

Friday’s price action tells me the market thinks the BOJ will make this pivot sooner rather than later.

In fact, Friday’s trading has seen USD/JPY break out of a key technical pattern.

Now, let’s look at this four-hour price chart of USD/JPY to see what I mean… 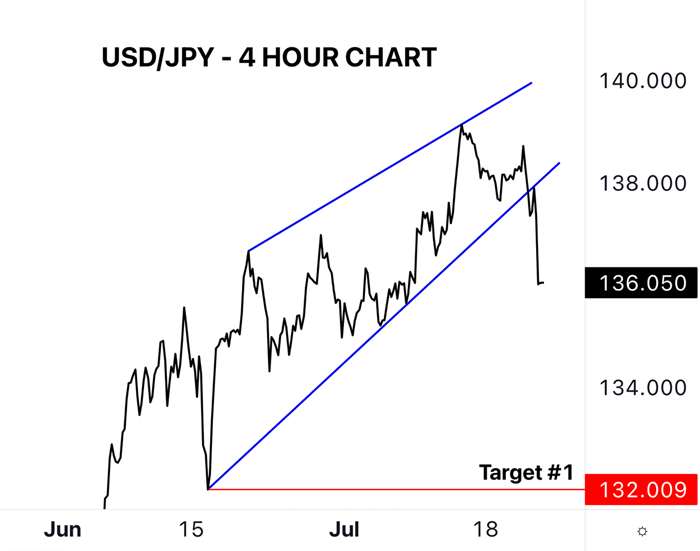 The technical pattern on the chart is a rising wedge (blue lines).

A rising wedge is a reversal pattern. Once prices break below the support line of the wedge, they’ll typically travel a minimum distance back to the beginning of the pattern.

In the case of USD/JPY, that would mean prices falling back down to the 132-yen handle (Target #1).

That’s a big move for a currency pair to make.

An approximate 3% slide in the value of the dollar relative to the yen would be a great trade to capture.

Have you traded forex before? If so, what was your experience?