The popular brokerage traded 175.8 million shares in just one day.

Steal from the rich, give to the poor… as the saying goes.

Except what’s happening right now is the rich are set to get richer, and the poor are about to be suckered into buying the highs… Just like they were with AMC on June 2. (AMC is down 50% since then.)

Today I won’t get into the fundamentals or take a deep dive into the macro trends that may affect HOOD – none of that matters in this case.

Sir Isaac Newton’s famous quote just about sums it up, regarding his misfortune on a hype stock called the South Sea Company back in 1720, “I could calculate the motions of the heavenly stars, but not the madness of people.”

That still rings true today. As we’ve seen during the “meme stock madness,” retail traders have no limit to the risks they take.

Now, I’m not saying Robinhood will end up like the South Sea Company – which crashed the market, and completely wiped out investors back then…

Maybe when all this hype boils over, and we actually see the financial projection, Robinhood may very well trade at similar valuations to companies like Las Vegas Sands or other casino stocks. (After all, it’s only fitting for a company that inspires so many retail traders to gamble their money on stocks.)

However, the type of mispricing and irrational behavior I’m seeing in the options market for this new IPO is exactly what happens to hype stocks at their peak.

Here’s what I mean…

Some investors use options instead of buying stocks to reduce their risk.

Options are products that have a strike price which gives the holder of the options contract the right to buy or sell at a pre-determined price.

The higher the strike price on the call option, the cheaper it should be…

But not for HOOD. Options on HOOD just started trading on Wednesday. 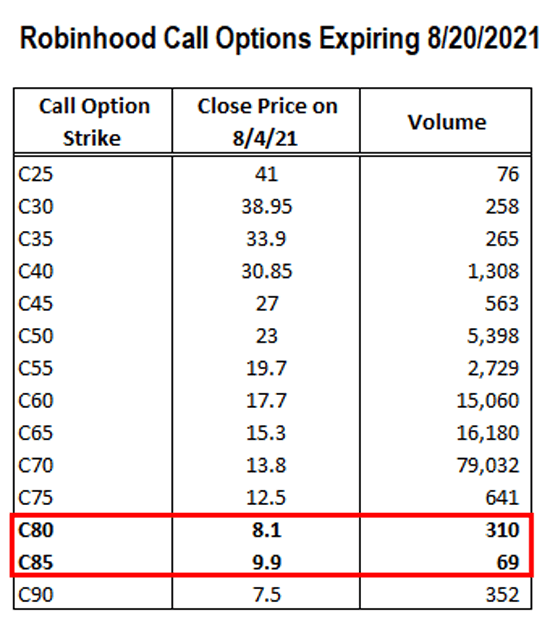 In the chart, you can see every call option price decrease as the strike prices increases except for those $85 calls in the red box. They actually traded for a $1.80 higher than the $80 calls. The September call options also had a similar, but smaller, mispricing between the $90 and $85 calls.

Where have we seen this before? None other than with AMC on June 2, at its high. 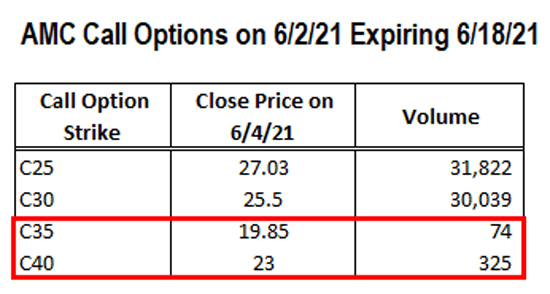 You can see the $40 calls traded significantly higher than the $35 calls.

People Know the Price of Everything, But the Value of Nothing

In addition, the sheer size of the premiums, (the cost of the option relative to the underlying price) being paid for bets that HOOD will continue to rise doesn’t make much sense either.

For instance, option holders are willing to pay $1,790 per contract for the $70 calls expiring on September 17… just for the opportunity to profit if HOOD rises above $88 per share.

To break even on this position, the stock has to trade at least 26% above $70 by expiration… that’s a lot to pay for a slim chance of just breaking even.

Why not just own 100 shares outright? The reason probably comes down to a combination of not wanting to use that much cash, and “the greater fool theory”… or the belief that there’s always someone else willing to buy at even higher prices.

Of course, it has to jump about another 26% just to break even, but probability and simple math doesn’t enter the realm of irrational markets…

So, how should investors play this?

The simple answer is if you don’t have the cash to spare, do NOT play roulette with HOOD.

But for savvy options traders, taking advantage of the high option premiums may be the best way to go. There’s a saying… “When people are willing to overpay, sell them what they want.” In this case, the higher probability play is to sell options… not buy.

It’s rare that an asset that trades with this kind of volume can be so mispriced, and when that happens, it’s better to be a shepherd than part of the herd.

Happy Friday Market Minute readers. I have a few things I want to cover in another brand-new presentation on what’s been going on in the markets.

Today, I’ll be going over Ethereum, a big breakthrough for Google, and whether or not the bull market is over. Click below to start watching.