We should know in about two weeks.

The wild speculative action in the stock market over the past few weeks has a lot of us “old-timers” thinking about the dot-com bubble of 2000.

There are plenty of similarities: like lots of new investors talking about how easy it is to make money trading stocks; those same folks ridiculing Warren Buffett; tiny, unknown companies surging hundreds of percent in a day with no news; folks paying no attention to fundamental values and instead finding obscure metrics (like “eyeballs”) to justify higher stock prices; and technical divergences popping up everywhere.

These are all warning signs of a potential stock market bubble. But today, just like in 2000, there’s no way to know for sure when that bubble will pop.

The folks over at SentimenTrader.com offered an interesting statistic after Monday’s big reversal day…

“The Nasdaq 100 rallied more than 2% intraday to set an all-time high, then reversed to close down by more than 1%.

It’s done that twice. Today was one.

Granted, we probably shouldn’t draw too strong a conclusion to a statistic that involves just one other event. But, it could be useful to see what happened to the Nasdaq 100 (NDX) that other time. 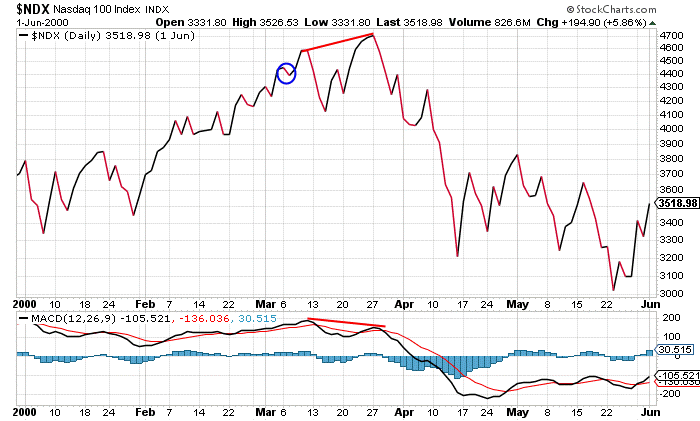 At first glance, it looks like no big deal. The index recovered immediately and went on to make another all-time high just two days later.

Then it got hit with another selloff the next week. But, once again, traders stepped up and bought the dip – and the NDX rallied to another all-time high.

Now, let’s look at the current chart of NDX… 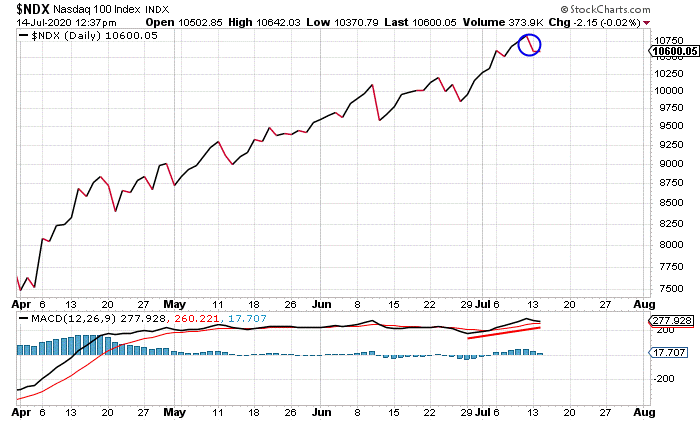 The blue circle is this past Monday.

And, just like in 2000, there isn’t yet any negative divergence on the MACD. The indicator has been moving up right along with the NDX.

In order to create that negative divergence, we’re going to need to see a stronger decline in NDX, and then a rally to another all-time-high. In other words, we’ll need to see the same sort of action that happened back in March 2007.

The stock market is already showing so many other similarities to what we saw in 2000. It’ll be interesting to see if we get a similar price action over the next two weeks.

Hey Jeff, just wanted to offer some encouragement – I’m with you.

I’ve heard that many newbie investors have powered the latest move higher. It seems to me that they’ll power the move lower too. I’m thinking the “rush for the door” will leave a bunch of folks injured. Thanks for your thoughts!

Just thought I’d pile on with more hate mail… not! You aren’t the only trader whose regular trading rules haven’t worked well lately. There are many others. From what I can see, the markets seem to be marching to the beat of their own drum this year.

Hi Jeff, just wanted to send you a quick message to say I appreciate your market insights. There’s a saying, something like, “markets can remain irrational longer than we expect.” Regardless of the market trades and updates you send, I realize that I’m responsible for all of the trades I make – both good and bad.

I enjoy your insights, as I’m able to make more informed decisions as a trader. I’m sure negative emails go with the territory, but I appreciate all you do.