Since the financial crisis of 2008, the Federal Reserve has become focused on their messaging… With Fed officials delivering coordinated speaking points during speeches and interviews.

At this point, the Fed has to be this way… But they only have themselves to blame. After all, they’ve kept the easy money flowing, regardless of whether the economy needed it or not.

The result is a market hooked on easy money and low interest rates. For more than a decade, investors have assumed these policies will continue indefinitely. And so far, they’ve been mostly right…

So, investors need to pay attention to the Fed’s messaging, because almost every decline in the markets since 2008 has been associated with a shift in policy.

Here’s why I’m telling you all this…

It appears a shift in the Fed’s messaging may be underway.

And today, I’ll show you exactly what to look out for, how I think the broad market will respond, and how you should prepare.

The Fed’s Shift in Tone

Recent messaging from the Fed can be summed up in two statements:

The first one is simple… The Fed chooses this language to assure investors that any change in interest rate policy is far away. That should keep volatility at bay for the time being.

But the second deserves more scrutiny.

The Fed has referred to inflation as “transitory” because they simply focus on the supply side of the equation… The bottlenecks created by the pandemic.

In their view, the inflation we’ve seen lately is just a temporary side effect of the market’s recovery from the pandemic, and that it will soon subside.

But to really answer the question of whether this inflation is transitory, let’s take a look at the demand side of the equation… 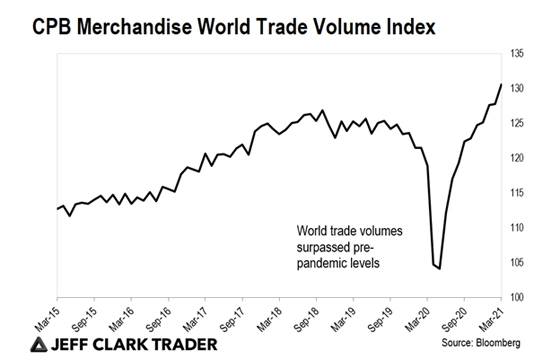 As you can see, trade volumes have actually surpassed pre-pandemic levels…

That’s not transitory… That’s a demand-fueled explosion combined with supply-side bottlenecks across industries… And this is what’s pushing prices up across the board.

So it’s puzzling that just weeks ago, after the Federal Open Market Committee (FOMC) rate decision, Jay Powell assured the world that inflation is under control stating:

“An episode of one-time price increases as the economy reopens is not likely to lead to persistent year-over-year inflation into the future.”

Powell went on to say that congested supply chains won’t affect the Fed’s position because “they’re temporary and expected to resolve themselves.”

But, then came the Consumer Price Index on May 12, obliterating analyst expectations… Analysts expected a rise of 3.2%, but the numbers came in at 4.2% – the fastest rise in consumer prices since 2008.

This confirms what average Americans already knew – that inflation doesn’t exactly feel “transitory.” The cost of goods and services is undoubtedly rising, and at a faster rate than before.

So it’s interesting how Fed members and alumni have shifted their tone after these numbers came out… And what that could imply for the market in the coming weeks.

The Fed’s Warming Up the Market for Some Tapering

Over the last week, statements from Fed members are starting to sound like they may not have everything under control after all… A few members mentioned tapering, which is the first step in the process of winding down from an unprecedented monetary stimulus.

“It may be time to at least think about thinking about tapering.”

However, Dallas Federal Reserve Bank President Robert Kaplan was more explicit. He wants tapering “sooner rather than later.” He’s worried about “excesses and imbalances in markets.”

I take it he’s not amused by “meme stocks” like GameStop and AMC.

And then came this head-scratcher over the weekend from Treasury Secretary and former Fed chair Janet Yellen:

“If we ended up with a slightly higher interest rate environment, it would actually be a plus for society’s point of view and the Fed’s…”

This shift in messaging makes the upcoming FOMC meeting on June 16 the most important one in nearly a year. Given these statements, it’s already a moot point that there will be at least some upcoming tapering. The question now is the scope and the timing.

Judging from their recent comments, it seems it could be sooner rather than later… Because if they don’t put a cap on inflation, they know that the 10% stock market correction in February will seem benign for what may come.

All of this tone-shifting from the Fed comes against the backdrop of a price dislocation in the VIX options market… Another indicator of impending inflation.

As you may know, the VIX measures of the market’s volatility expectations… When it rises, the markets tend to fall.

Jeff Clark regularly tracks the VIX for his subscribers.. Here’s what he had to say after last Friday’s jobs report sent the market higher:

In other words, traders were willing to pay 100% more for a VIX call option that was out of the money than for a VIX put option that was $0.50 in the money. This tells us that traders making bets on the VIX expect the index to move higher over the next two weeks.”

So now, Fed members are shifting their narrative to get the market ready for at least some tapering as the VIX options market finds itself dislocated… Not a great combination for investors looking to ride momentum much higher from here.

Traders should expect volatility over the next two weeks and prepare their portfolios accordingly.

You can do that by simply trimming some of your long exposure and locking in your gains… Or taking advantage of a potential decline with put options.

If the Fed comes out and surprises the market with larger than expected tapering, or even tapering that’s ahead of schedule… You don’t want to be caught too bullish on this market.

Do you think the Fed has inflation under control?