There are many ways to fend off an enemy.

You can use blunt force…

You can use threats…

Or you can use the art of persuasion.

Right now, that enemy is inflation.

And the Fed is hoping that they can rely on persuasion alone to fend it off.

The last thing they want is to carry through with their threat of raising interest rates more than promised.

And for now, they think persuasion will work just fine…

You see, something that Fed watchers have known for years was acknowledged during Jay Powell’s press conference on January 26 when he said, “We feel like the communications we have with the markets are working.”

They’re hoping to persuade the market into knocking down inflation on its own before having to take out the big guns.

This kind of open line communication with the market is relatively new.

In the past, the Fed was pretty opaque.

Now, there are tons of press conferences, dot plots, and interviews with Fed members, all in the hopes of controlling the message before the market does.

When it comes to inflation, warning markets way in advance is a tool to avoid self-fulfilling prophecies from happening.

That’s because many economists believe that inflation is just a self-fulfilling prophecy.

But will it work?

Well, maybe… According to the bond market, at least. 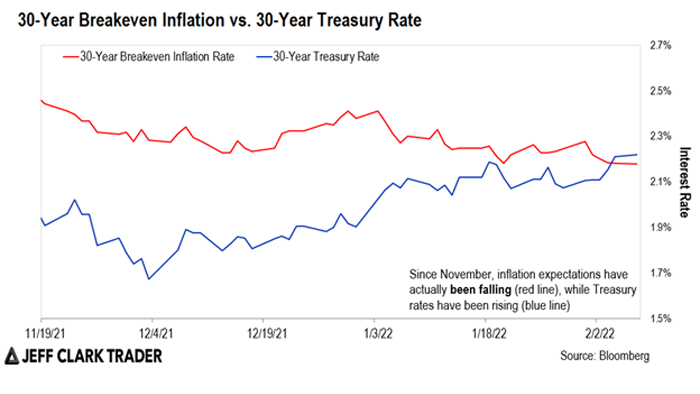 Since November, breakeven inflation rates have been going in opposite directions with Treasury rates.

And it all coincided with the chart below that we introduced a couple of weeks back. It shows the market’s expectation of rate hikes for 2022 vs. the Fed’s baseline estimate.

In fact, this chart is the most important data point driving markets right now.

It cuts through all the noise by not only pinpointing why January 5 was the market top but exposing something of even more concern in the market today.

Take a look at this chart below… 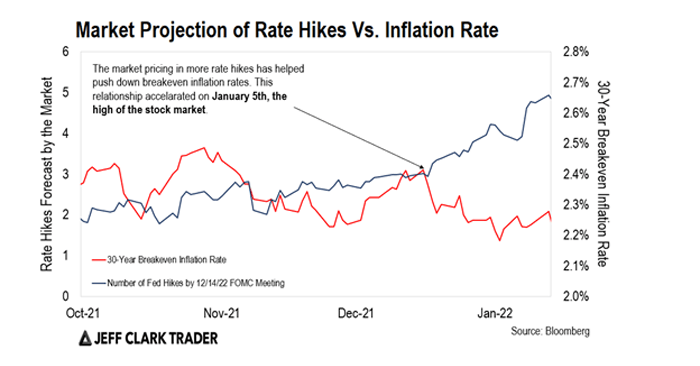 As the market started to price in more rate hikes, inflation expectations started to drop.

Now let’s throw in another piece to this puzzle…

So far, the Bloomberg Commodity Index is up 10.5%. That’s in just six weeks.

As we’ve explained before, commodities play a big hand in driving inflation and as a result, the CPI continues to rise.

So how do we make sense of inflation expectations dropping while commodities are rising faster than last year?

Well, it could come down to one of the ugliest words in economics – recession.

A recession is defined as a slowdown of the economy (measured by the GDP) two quarters in a row.

And because recessions are usually deflationary – meaning demand slows down and prices simmer down – inflation expectations follow suit sometimes well in advance.

As long as the stock market stays down and rate hike expectations stay up, you’ll probably see mainstream headlines catch up as they start preparing everyone for this very real possibility.

What About Modern Monetary Theory?

The economy will need to adjust to a material rise in rates.

The Fed’s grand experiment, Modern Monetary Theory, is the belief that printing money will never catch up with you.

But now inflation has caught up with the Fed.

For investors, the silver lining is that the market is a forward-looking barometer.

Stock market losses lead to recessions – and we already had our 10% drop. But not all recessions are devastating for the market.

By the time the GDP validates what we see on the ground, the market will already rip higher – 2009 is a great example of that.

The Fed is trying to squash inflation – sometimes that means biting the bullet and taking some bitter medicine.

That’s from Paul Volker’s playbook – and it set the country up for unprecedented prosperity.

This is the perfect time for investors to understand more about how the economic machine works… and that means trading products outside of stocks.

Right now, my focus is the momentum in rising Treasury rates.

Shorting the iShares 20 Plus Year Treasury Bond ETF (TLT) is a natural proxy for that (interest rates and bonds have an inverse relationship).

Pair that with buying gold on every dip – which will defy its traditional relationship of weakness amid rising interest rates – and you get a “Holy Grail” pair.

That’s when a portfolio or position has a natural hedge component to it but can also be profitable on both sides. And when that happens, it allows you to scale since your risk is naturally low.

This may be the year that gold’s “safe haven” reputation will render traditional relationships obsolete along with Modern Monetary Theory.

What are your thoughts on how the Fed is trying to manage inflation and the possibility of a recession?