Seasonality seems to have gotten in the way of reality…

The reality was known loud and clear on December 15 when the Fed announced it was tightening ahead of schedule.

A tighter Fed leads to stock market losses, especially when it played such a heavy hand in inflating prices to begin with.

But after three straight down days following that announcement, a seasonal end of year “Santa Claus” rally came along and threw many investors off…

It made them believe that the market no longer cared about fundamental principles that really drive markets underneath it all.

Many think “this time it’s different,” but it never is.

For example, Jeff Clark stated this a couple of weeks ago…

Nimble and agile traders are in for some incredible money-making opportunities.

And here was my take on December 14…

The “January effect.” It’s a theory that says markets tend to rise in January due to temporary price dislocations caused by things like tax harvesting.

But none of it’s true…

You see, the average returns in January since 2000 are actually negative on average. It all boils down to whether the Fed’s monetary policy will remain loose or is set to tighten.

Even though we knew a tighter Fed meant the risk profile of the market had taken a turn for the worst, we also knew there were gains to be had by playing both seasonality and the Fed.

We Scored on Seasonality Both Ways

You see, commodities also experience Santa rallies. Which is why he recommended our Delta Report subscribers buy Teucrium Soybean Fund (SOYB) calls on December 16. A two-week hold netted them 162%.

That’s why he issued a recommendation to buy Barclays iPath Series B S&P 500 VIX Short-Term Futures ETN (VXX) calls on December 30… right at the peak of the Santa rally.

Our subscribers got all the upside from the seasonal end-of-year rally and profited from the “surprise” sell-off last week.

The VXX recommendation was almost a no-brainer trade because a tighter Fed is kryptonite for the tech-fueled rally we’ve seen the last 18 months.

Right now, higher rates are weighing down on the tech sector, and a relief rally may come if rates start to back off from their recent highs.

So, let’s look at this chart of the 30-year Treasury rate compared to the Invesco QQQ Trust Series (QQQ) and the SPDR S&P 500 ETF Trust (SPY) ratio… 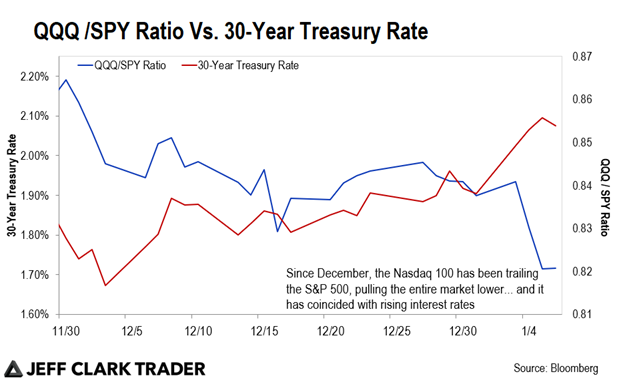 The QQQ/SPY ratio rises when QQQ outperforms and falls when SPY outperforms.

You can see the recent rally in interest rates coinciding with the tech-heavy QQQ falling off a cliff relative to the value-oriented SPY.

They’ve quite simply been going in opposite directions.

On Monday, rates tried to go even higher but stumbled. That’s important because it’ll spell the basis for any kind of relief rally in the tech sector.

The 30-year rate is setting up for a re-test around 2%, which would at least partially reverse the trend in free-falling tech for a few days.

Jeff Gundlach, the billionaire and self-appointed “Bond King” of the markets calls current levels on the 30-year, “a line in the sand” and that 2% area a “big deal.”

And it definitely is.

Tech investors now find themselves in an uncomfortable situation – where they have to grudgingly pay attention to macro fundamentals, and not just metaverse trends or who’s on the cover of magazines.

The ones that do pay attention will improve their market timing and make more money than by chasing prices alone.

Do you find yourself chasing the market’s trends, or have you stuck to the fundamentals?