Copper still has plenty of room to rally.

The last time we looked at the bronze metal in early July, copper was in the midst of a wicked decline.

The price had fallen 24% in just one month. That decline wiped out 18 months’ worth of gains. And copper was more oversold than it had been at any other time over the past 10 years.

So, I suggested the metal was due for an oversold bounce.

And because the market Gods so enjoy humbling me, the price of copper then fell another 5% over the following week…

However, since mid-July copper has enjoyed a solid rally.

The price is up 16% over the past five weeks. It’s 10% higher than where it was in early July. And the technical setup looks even more bullish today than it did back then. 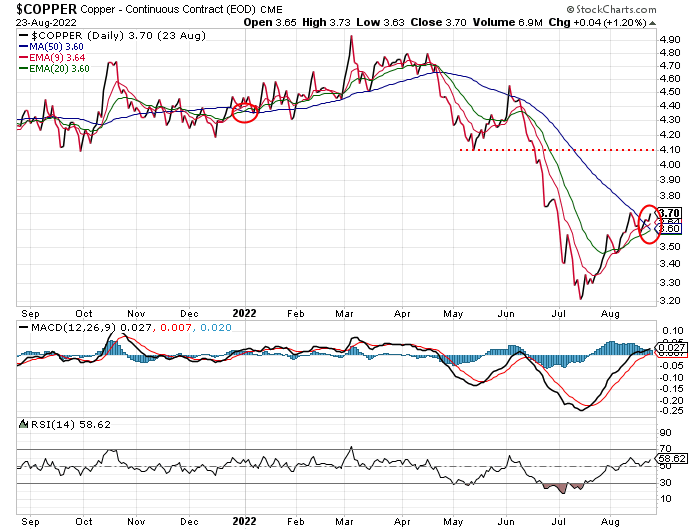 Copper is now trading above all its various moving average lines.

This sort of “bullish crossover” often indicates the start of a multi-week rally phase.

Indeed, we can look at how the previous bullish crossover at the start of 2022 marked the start of a three-month-long uptrend.

Also, notice how the momentum indicators at the bottom of the chart (MACD and RSI) haven’t yet stretched into overbought territory. They’re certainly not as oversold as they were five weeks ago. But they’re still just “neutral.”

So, there’s plenty of room for them to move higher and support a copper rally.

Traders who bought copper in early July – expecting a bounce off oversold conditions – should stick with the trade.

Copper looks bullish here. It could be trading above our target of $4.00 per pound in the weeks ahead.

Did you buy copper in July? If not, will you trade it now?