The stock market is set up now for one more solid pop higher.

After the bulls took back control of the market during Monday’s big rally, the S&P 500 has been stuck in an annoyingly tight range. The index has climbed a few points higher over the past two days. But it has been a painfully slow move.

Now, though, the market looks poised to pop and rally up to the 2505 target I mentioned on Tuesday. Look at this 15-minute chart… 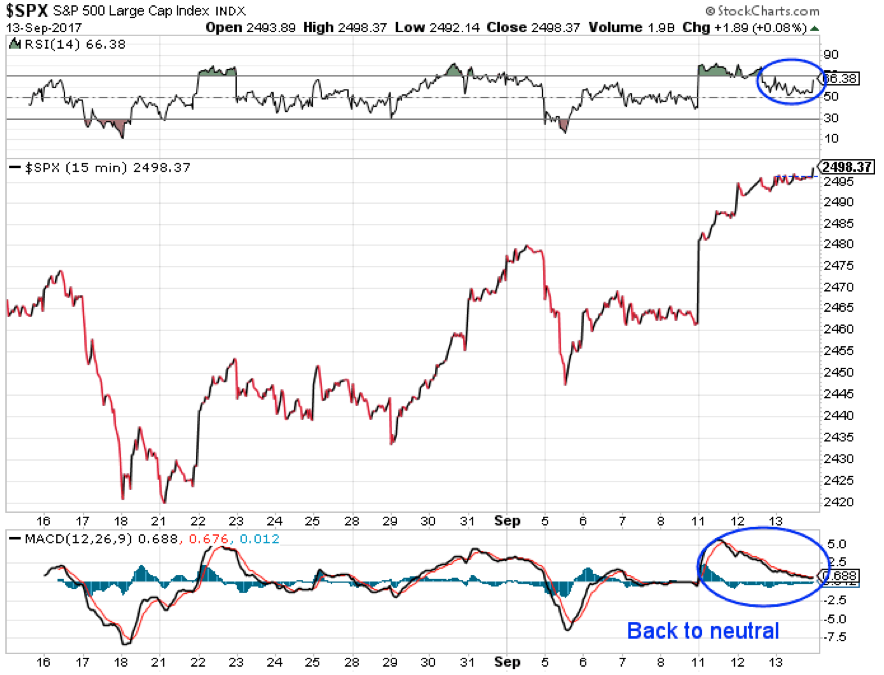 Both the MACD and RSI indicators reached extremely overbought levels on Monday's big rally. The consolidating action yesterday and Tuesday hasn't done anything to the price level of the S&P, but it has allowed the technical indicators to drop back to neutral.

This is a bullish setup.

Since this is a 15-minute chart, the bullish setup should play out today or tomorrow. That's why I'm looking for higher prices, and I think there's a good chance we'll see the 2505 target get hit.

Of course, that's not a lot of upside from here. But the 2500 level is psychologically important. If the market breaks above that level, then all the folks who have aggressive short positions (and from what I can tell, that is a very popular trade) are going to have to cover those trades to reduce their pain.

So, even though I think the market will head lower into next week, I'm not yet ready to start getting short right here. There's just too much potential for another push higher.

So, I'd rather wait a bit longer and see if this bullish setup plays out. Then we can take a short position in anticipation of the typical pre-FOMC action which is usually a down Friday and Monday before the meeting.

If we rally up to 2505 today, then I might pull the trigger on a short trade. Otherwise, I'm willing to wait and see how things play out tomorrow morning.

P.S. Will you be looking to open some short exposure after today’s action? Let me know your thoughts – as well as any questions, comments, or suggestions – right here.

For today’s mailbag, some happy Delta Report subscribers write in about a recent portfolio win…

The TEVA trade was a thing of beauty.

You nailed it on TEVA, I have never profited over 100% on the same ticker…

Thanks for the education and keep it coming! Happy Trading!

The last TEVA trade cycle was an absolute blast! Ching… Ching… Keep up the great work! When does the next lifer membership opportunity open up?

Jeff’s note: Darryl, keep an eye on the Market Minute later this month. You’ll learn more details about such an opportunity then…