It’s a $1.2 trillion bill, of which $550 billion is earmarked for our deteriorating roads, bridges, broadband, water, and energy systems.

In response, President Biden said, “Generations from now, people will look back and know this is when America won the economic competition for the 21st century.”

Well… I think the bipartisan support is certainly encouraging. But will that be enough cash?

It was a fraction of what we thought we’d get, and the $550 billion is short of the estimated $2.5 trillion infrastructure investment gap identified by the American Society of Civil Engineers.

And for traders, it means continued support for commodities.

Right now, not all commodities are showing the same bullish trigger points.

First, here are a few things the new bill will focus on fixing…

These are just a few of the items in the bill, but if all goes as planned, the demand for raw materials will only continue to rise. And it’ll help push rising commodity prices from a short-term trend to a long-term one.

But, when most people think of commodities, they think of energy first.

Right now, the energy trade may be over for the time being… But the metals sector looks like it’s about to get some fresh legs.

When it comes to energy, Jeff recently introduced the bullish percent index when he wrote last week…

The bullish percent index for the energy sector (BPENER) was on the verge of triggering a sell signal. And, BPENER sell signals are often followed by significant declines in the oil stocks.

But oil is not just a commodity, it’s also a political tool.

Pressure has been mounting on the Organization of the Petroleum Exporting Countries (OPEC) to boost oil production and help get oil down… the biggest contributor to rising inflation from the commodity sector.

In response, OPEC pointed their finger at Russia – because Russia hasn’t been exactly jumping off its chair to send more natural gas into Europe.

After all, I can see why a near 400% increase in the price of one of your country’s biggest exports would make you want to sit on those gains just a little bit longer…

And part of oil’s strength has actually been the result of this increase.

That’s because it led to a substitution of demand from gas to oil.

But with Russia abating and promising more natural gas supplies, the dynamic in Europe may shift away from oil and help send oil and gas prices lower.

On the other hand, another leading commodity already came in from its highs…

Metals Are on the Move

One of the best-looking trade setups in the market today is in copper… from a risk/reward perspective, buying copper right here at $4.32 per pound offers limited risk and plenty of potential reward.

In fact, the metals sector in general is offering all kinds of bullish setups right now.

Take a look at this chart of platinum… 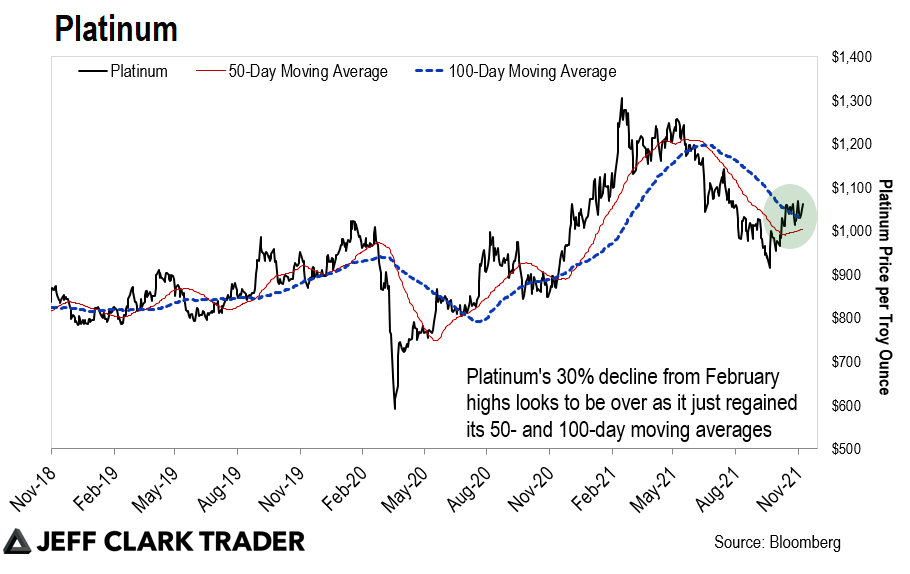 Platinum has spent most of the year since February declining. However, this chart shows that decline came to an end this September.

And recently, platinum has regained its 100-day moving average (MA).

With metals being one of the most dollar-sensitive commodities (usually showing an inverse relationship where if the dollar falls, metals tend to rise), the recent passage of the infrastructure bill and the current macro backdrop make commodities like gold, silver, platinum, and copper a good sector to watch relative to energy.

How do you think the infrastructure bill will affect commodities in the future?

Let know your thoughts – and any questions you have – at [email protected].