With the U.S. government gearing up to pass another $1.9 trillion in stimulus, the idea of inflation has dominated the mainstream financial news headlines.

For once, the mainstream media are right in warning about this. In my view, this development is setting up the macro trade of the year.

But what’s important to understand – especially for traders looking to capitalize on these conditions – is that money printing does not, by itself, create inflation.

So in today’s issue, I’m going to share what I think could be the best investment as this inflation story plays out…

Not New, and Still Not Understood

Money printing is not a new concept. Central banks all over the world print money as the go-to solution for recessions or even just periods of weak growth.

However, none of the money-printing campaigns in recent memory have helped the underlying economy, nor did they produce inflation – at least not in consumer prices.

What they did inflate were asset prices.

You don’t need to look far for a good example. The last time the U.S. used money printing to bail out the economy was after the 2008 crash. It was called “quantitative easing (QE).” It then became QE2, then QE3… Then QE4.

And the stock market essentially ran in a straight line higher after it bottomed in 2009. Yet commodity prices continued their trend down. The Fed finally started to unwind its balance sheet and raise interest rates in 2017 and 2018.

But after a violent selloff in late 2018, the Fed paused its interest rate hikes. And when the coronavirus pandemic hit U.S. soil, the Fed backpedaled even more, and took rates to zero – printing trillions of dollars.

Here’s why I’m telling you all this…

Believing the mainstream narrative of what money-printing causes can lead you to make less than optimal investment choices – if you’re not scared out of investing altogether.

In my view, there’s one forgotten market which will benefit most from this type of environment. And that’s commodities…

The New Commodities Supercycle Is Here

Commodities look like they’ve come out of a secular decline. That happened in 2008, too. But the main difference between then and now is that commodities are leading the charge higher, not the stock market. 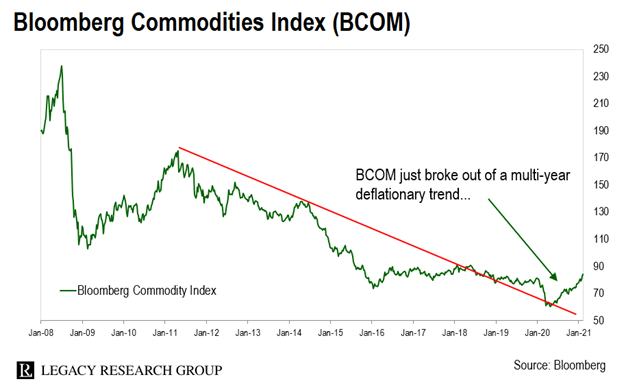 There is reason to believe that this development has some legs to it. Wages are growing, and will get an extra boost from the Biden administration’s proposed minimum wage increase. This, in turn, will further bump the Fed’s preferred measure of inflation, the Personal Consumption Expenditure Index.

I’ve also never seen so many commodities that are in backwardation (when current prices are trading higher than futures prices). This is an indicator of supply issues, which drives prices even higher…

This is something we haven’t seen since the aftermath of the dot-com tech bubble. And it’s playing out before our eyes. Everything related to energy, metals, and agriculture are soaring. Some lesser-known metals, like platinum, are outpacing the whole space.

As the market pushes rates higher, high-duration assets will increasingly come under pressure. (That is, companies with a majority of their valuations coming from potential earnings in the future.) That’s because their future cash flows are worth less in present day terms as interest rates rise.

To me, this explains why Robinhood darlings like Tesla and NIO have been underperforming this year…

How To Play This Trend

Usually the go-to product for commodity exposure are ETFs like the United States Oil Fund (USO) or the Invesco DB Agriculture Fund (DBA). But I don’t recommend buying ETFs. Most of them are just well-marketed, highly flawed products that are far more interested in attracting capital than actually providing a good investment vehicle.

For instance, DBA has a sizeable bond portfolio in its holdings to match its agricultural exposure… And bonds fall during inflationary periods.

However, there are solid companies, with low valuations, that are set up to take advantage of a potential inflationary environment and commodities bull market.

A simple, equally weighted basket of 5 companies: Archer-Daniels-Midland (ADM), Bunge Limited (BG), Anglo American plc (NGLOY), Sibanye-Stillwater (SBSW), and Exxon-Mobil (XOM) have returned 19% YTD, and 45% since the election in November. The tech-heavy Nasdaq and the S&P 500 pale in comparison with just a 21% and 14% return, respectively. This is one area where momentum should continue.

The last time the Fed had to face inflation in a real way was in 1981. That’s when Paul Volcker had to do the unpopular thing and raise the Fed rate to 20% to kill rampant inflation.

It remains to be seen what this Fed will do. They’ve claimed they won’t raise rates for years to come, but it looks like the market might beat them to it, as they force the Fed’s hand by jacking the market rate through the treasury market…

To take advantage, I would suggest any trader look to the commodities market for some bullish price action. And for long-term investors, picking up some currently unloved commodities companies will likely pay off in time.

P.S. The new commodities supercycle will have many bumps along the way. And, if you know how to trade those bumps, you can rake in serious profits on top of the long commodities uptrend.

All you’ll need is this one “boring” stock that most people haven’t heard of… Combined with Jeff’s simple strategy, this tiny stock has the potential to make huge profits with just a few minutes of effort each month.

Click here to learn more about Jeff Clark’s unique strategy and how you could start building a fortune for your future.

In today’s mailbag, Jeff Clark Trader member Al thanks Eric for his recent essay on bitcoin…

I just wanted to thank Eric for the article on bitcoin. I’ve held some for three years now. This year, I sold some then cashed it all in. Then, Elon Musk (the Hollywood CEO) had to screw things up for the small guys like me and make more headlines for himself.

It’s been tough to keep telling myself to hold on, and it still doesn’t make sense. Eric’s article was very encouraging and reaffirmed my thinking.

I read the love note. I didn’t understand why it would be from the 1% though. I thought it would be from, what is now called, the middle class. My son and his wife have already packed and are moving elsewhere. Yes, I can see how it’s from the 1% as well, but the tech giants have contributed to what we have now and what will come with this administration. They’ll have open doors to take their manufacturing to other countries. They will desert the big cities and leave behind empty buildings. They can ship their products from elsewhere.

We have contributed to their profits by purchasing what we thought we wanted from the 1%. Then, they sold our information, and we lost our freedoms in the deal.

Meanwhile, the doors of the country will be swung wide open. Others will be welcomed in, educated, given financial support, housing, and jobs. Then they’ll register to vote, and we will have more of the same situation.

What stocks to invest in? Those who want to numb our minds, track our every movement, and sell our information. Right now, I’d prefer to go elsewhere, but where? Yes, in 2052 the 1% will not like what they have made of America and will want to leave. I’ll probably be dead, but my children and grandchildren? They’ll never know the America we had.

Jeff, thanks for your short essay on President’s day. I’m 77 years old, and for years I thought my feelings about the country had drifted from memories of my younger years and were mistaken rose-colored opinions of my youth. But I’m now convinced that my observations are like yours and are accurate. It’s a pity.

Finally, Market Minute subscriber Gary gives his prediction on what will happen to the 1% from Jeff’s President’s Day essay…

Jeff, it’s good to see that folks from California have nostalgia for a better time in this country! What sets you apart from most of the 1% in finance/investing is that you work very hard for your readers and you care about your craft. The guys in the ivory towers in New York and San Francisco don’t ever put themselves in front of the unwashed. They take a piece of everything, then use other people’s money to lever up, then they run when everything crashes.

Some of your readers won’t like a message signed “1%.” I’m in the 1% for sure and worked hard to get there. I always did the right thing, served in the military, raised good kids (I think), never been arrested, paid all my taxes on time, and helped grow a business that employs hundreds of folks. But now I’m supposed to be ashamed that I’m white. I was raised here in D.C. during the ‘60s when we learned that color didn’t matter. Now, that’s all that matters.

But, I have a good life now. One son is a doctor, my daughter is a pediatric nurse practitioner, and my other son is a digital marketer for a private treasury company. So, I think I’ll leave behind a better world, thanks to them. But the U.S., as you say, has changed a great deal. Being progressive appears to mean that we should go backward, not forward. I have worked in D.C. for over 35 years and seen the mess it’s in now with the troops and barbed wire everywhere. It’s unrecognizable. So, while I thought I was doing the right thing, and the future looked better for my kids, now I don’t think so.

Our political class is an embarrassment. The Democrats scream that it’s the other side’s fault, then proceed to challenge every norm and acceptable institution that provided the guidance to make us what we are. Oh, and what we are is shamefully oppressive – so they say. Conservative and libertarians, by definition, want to be left alone with things left as they are, or as they slowly become. Wrenching the old rules and behaviors out from under us is not a formula for civility. And somehow, it’s the fault of those who are simply trying to work hard and live the dream.

So, thank you for the analogic letter. Very well done. I don’t think everyone will agree. That’s fine, as long as you aren’t attacked publicly such that we lose access to your expertise.