That’s a recent quote from American billionaire investor Charlie Munger that made me a little annoyed.

Not only that, I felt angry and confused… followed by a wave of calmness.

I’ll get to why I feel calm about it in a bit.

But first, let me explain my anger and confusion.

Maybe it’s because since 2009, his wealth has been manufactured by the Fed because of their (almost religious) use of Modern Monetary Theory (MMT).

And it was that religious zeal that exposed their biggest flaw… that MMT will never cause inflation.

It missed how us uncivilized people will ultimately react as we watch our earnings and savings lose more and more buying power.

We uncivilized people need gold… and so will Chuck.

Yes, there are other ways to hedge against inflation. But ultimately, people can’t exchange their stocks, cars, and homes for things like gas, food, and clothing.

Gold is the only form of money that exists in the physical world that they can’t erode through their new-found economic religion.

It’s the diehard belief that you can print money, give it away for free, and steal from the future to keep the party going…

Except that theft will likely last longer than just 2022.

Inflation is as much behavioral as it is simply watching prices rise and hoping for the best.

When we start sensing that our institutions are failing us – confirmed by prices that are getting out of control – we start to look back at all the failed experiments of prior regimes, political waves, and economic thought and want something timeless.

Most economic theory (like MMT) misses this very simple point – that when that breaking point occurs, inflation starts to feed on itself.

It’s why economics is really just a practice in common sense… the good economists have it, the bad ones don’t.

At the end of the day, economic theory is just a collection of circumstantial evidence masquerading as statistical fact.

Which brings me to why I feel calm…

Gold Is Here to Stay Regardless of What the Fed Wants

It’s because despite what Chuck has to say, gold is doing exactly what it’s supposed to… rise.

You see, most traders believe that when rates rise, gold falls.

As I’ve said before, gold will defy this relationship. And it’s been doing just that. Take a look at the chart… 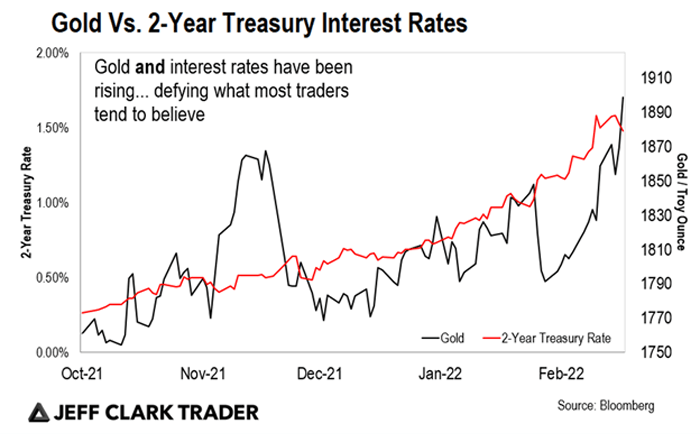 That’s because assets – especially ones that when worst comes to worst, can be used as money – are the only hedge against the dumpster fire that MMT is proving to be.

Gold Doesn’t Need Geopolitics to Rise… It Will Rise Regardless

In Tuesday’s essay, I said that regardless of the outcome in the Ukraine/Russia saga, gold will rise. And any pullback from Friday’s highs is a gift to keep buying.

Then right on cue, it pulled back 1% on Tuesday and is now trading higher than the highs on Friday (when news broke out about this Russian war that may never happen).

Oil prices are also a proxy for geopolitical risk and are now only slightly up from last Thursday’s pre-newsbreak levels.

Finally, the S&P 500 has been range-bound all week.

Meaning that underneath it all, this Russia scare isn’t really doing much to the markets… except finally reminding investors that gold prices won’t stay at these levels for too long.

That’s the kind of sentiment you need to get a real push in prices.

Right now, gold has been in a two-year bull flag pattern that’s just starting to break out.

I think the reckless policies of the Fed, Congress, and the resultant inflation could easily cause gold to be over $3,500 and silver over $100 within three years or less.