Bitcoin was created to defy the market…

An asset that was created to be devoid of influence from the Fed, the government, and general market sentiment….

And at its best… this has been true.

For instance, in 2017, leading up to the introduction of the first bitcoin futures product, it rose 366% in three months.

The biggest example was bitcoin’s 700% rise coming out of the lows of the pandemic… when it reached $40,000 for the first time.

All of these gains in bitcoin happened when its correlation to the overall market was falling, and it was dancing to its own beat.

Even though bitcoin has recently bounced 30% from its lows this year, it has done so completely in sync with the market. So, its correlation to the market has been high. 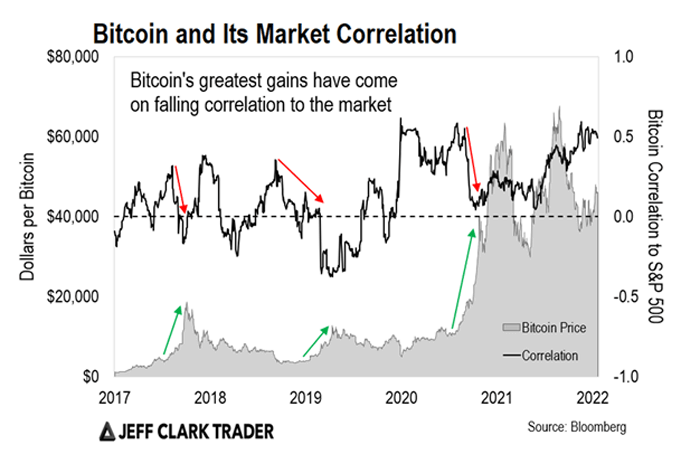 The black solid line is bitcoin’s correlation to the S&P 500 with bitcoin’s price overlaid in the background.

Right now, that correlation is at its highest. This is probably due to institutional influence from the hedge funds and banks that got in on it… diluting bitcoin’s unique qualities.

Investors who are interested in timing those big 200%+ gains in bitcoin want to see the price moving up without help from the market… an even better scenario would be bitcoin rising with the market falling.

For bitcoin to do that, it needs a new bullish narrative. Right now, it just doesn’t have the hype to push it through the labyrinth of market fluctuations.

That’s a problem for bitcoin, because when it trades with the market it becomes the market on steroids.

Which is why you may have noticed that the end of the relief rally in the market – a rally I called would come to an abrupt end on March 29 – saw bitcoin drop 10%.

Without a new narrative specific to bitcoin – one that’ll unchain its price from all the algorithms and trader influence at some technical level or other – the trajectory of its returns will continue to resemble that of the market.

Right now, what makes bitcoin different than the market at large?

How do you think bitcoin can go back to generating big gains without market influence?