It seems like bitcoin headline writers have been working overtime this year… For example, the tweets from Elon Musk, the ban from Turkey, two separate bans from China, the list goes on.

Every hype-filled headline has proven to be an opportunity to either sell when things get too good or buy when the mood gets negative.

Now, the excitement is back…

The positive sentiment around this event helped send bitcoin to new all-time highs.

But, as bitcoin regained those all-time highs on Wednesday, it finds itself in a danger zone because that excitement isn’t coming from institutional investors…

Before I explain, I want to point out that we’re by no means bears on bitcoin.

Regular Market Minute readers may recall when we recommended $42K as another one of those opportunities to buy with open arms. We wrote, ”…long-term bulls should get excited about bitcoin hovering around $42K…”

It turns out, we weren’t the only ones that saw this as a buy zone…

One indicator I use to figure out if institutional investors, or “whales,” are buying is the price differential between bitcoin traded on Coinbase and other exchanges.

I look at Coinbase because it’s a regulated, buttoned up, publicly traded company.

Institutional investors – like Cathie Wood for instance – can’t take the risk of being involved with smaller exchanges. So, when they make a transaction, they tend to do it on Coinbase.

This indicator reveals key technical levels, and I’ve even used it to recommend buying at the $30K level not once… but three separate times here in Market Minute.

So, let’s take a look at how these price differentials looked on two separate exchanges when bitcoin was taking off from $42K between September 30 and October 1… 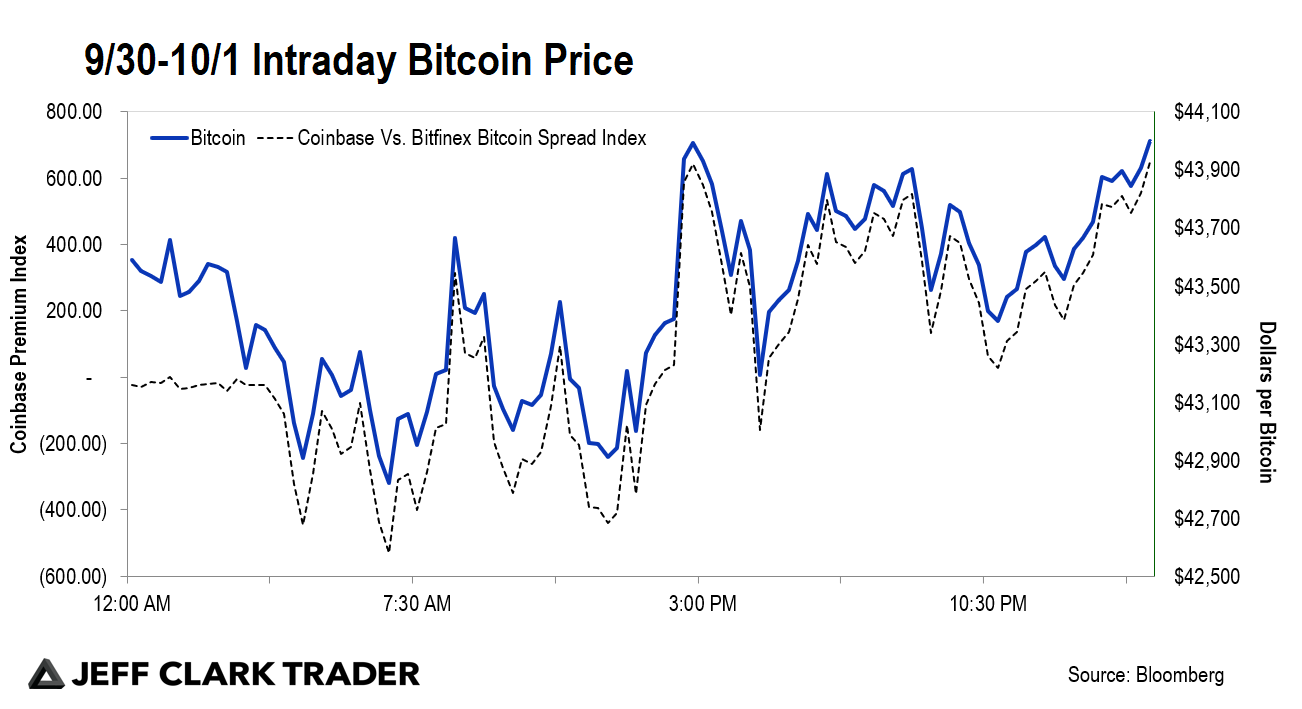 The chart shows the price differential on Coinbase vs. Bitfinex (black dotted line) overlaid on the price of bitcoin (blue).

Not only did the price differential track bitcoin perfectly, those who were buying on Coinbase were willing to pay a $600 premium to Bitfinex – a sign that the whales (big holders of bitcoin) were actively buying that level.

In addition, this was coming off the fallout from China’s all-out crypto ban – which sent bitcoin down 20% from $50K…

What ensued was a fast and furious rally from $42K to new all-time highs… a 60% gain in just 3 weeks.

But now, let’s take a look at this same indicator on the day it broke its previous high of $64,869 this Wednesday… 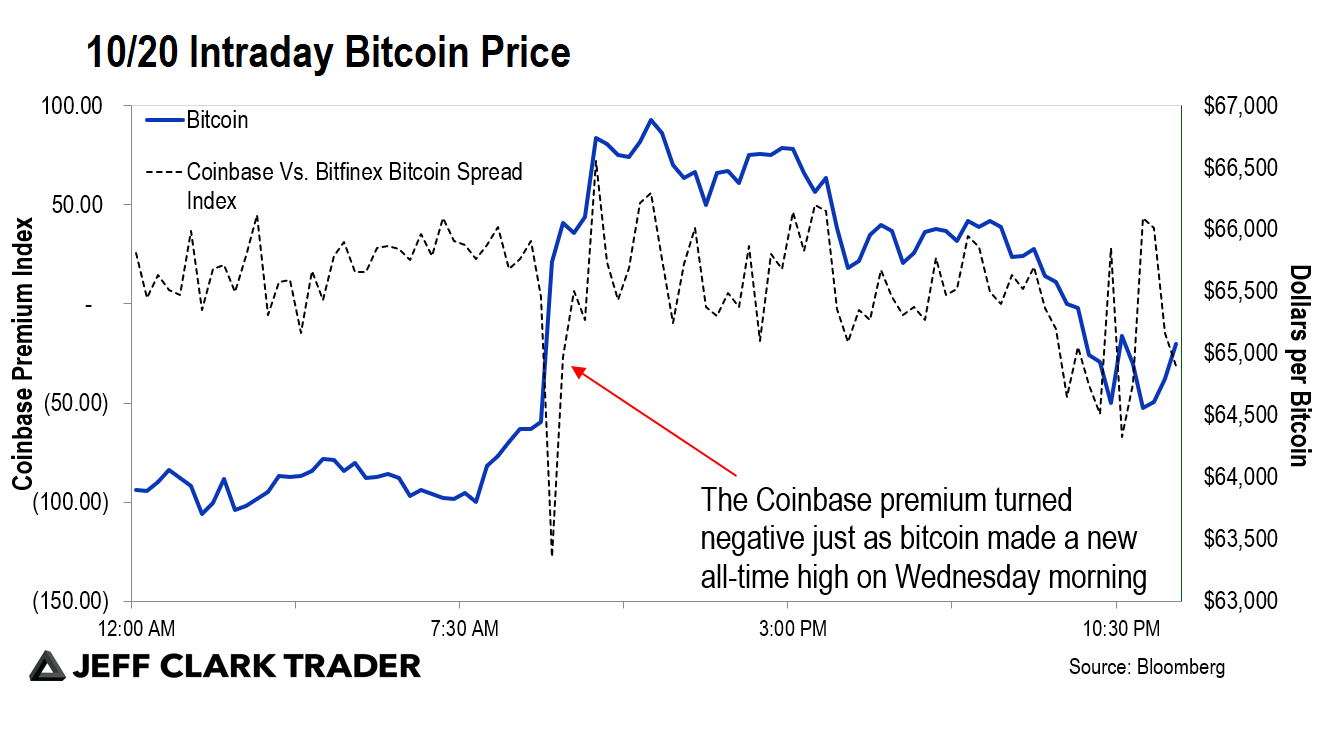 In fact, there are a couple of spots on the chart that are troubling. As bitcoin crossed $65K to make new highs, the premium on Coinbase turned negative.

In addition, the premium never crossed $100 – on a day that bitcoin made new highs.

Which means the whales were buying with open arms at $42K, but they may have been selling into strength at $65K.

All of this comes against the backdrop of a new ETF that’s been years in the making. But, there are a lot of structural problems with this ETF, which may be why the whales are hesitant.

The ProShares Bitcoin Strategy ETF (BITO) gives investors exposure to bitcoin through futures that track the price of bitcoin, not through bitcoin directly.

To clarify, futures-based products are not good vehicles for long-term investors. (For a more detailed explanation on why that is, you can refer to our previous essay on roll yields here, where we discuss how futures can deteriorate returns over the long haul.)

Bitcoin has a long history of overreacting to news events… with the recent ETF reveal being no different.

And, although bitcoin just made all-time highs, the lack of enthusiasm from the big whales should make investors take a step back, take some profits, and wait for better price levels.

Where do you stand on bitcoin? Do you think momentum from the recent breakout will carry forward?