Traders and investors hear it constantly, but what does it actually mean?

Instinctively, most traders know what risk is. It’s that nervous feeling in the pit of your stomach when you hit the buy button and you know you shouldn’t have… we’ve all been there before.

Reward is a different feeling… there’s no nervousness or butterflies. You don’t even care if the trade starts working against you because somehow you just know you’ll come out the other side a winner.

But that’s all instinct… and investing on instinct only works in the movies.

In reality, the combination of feeling risk and reward is nothing more than a ratio – one over the other.

In the case of the risk/reward ratio, it’s a combination of how high returns have been relative to their stability.

Statistically speaking, it’s your average return over its standard deviation – often known as a Sharpe ratio. (Some investors may imagine it as how much grey hair do I have to get before I make money?)

The holy grail, of course, is high and stable returns…

Institutional capital – the big money that ultimately dictates where prices are heading – looks at asset allocation through this lens. It becomes most active at extreme levels.

But here’s the secret many never seem to understand – risk/reward is never all risk or all reward.

It’s somewhere in between… and when it gets stretched too far to one side, it can create a very powerful trading signal.

Today, I’m going to share what this risk/ reward ratio actually looks like, and how looking at bitcoin and the S&P 500 can help decide whether to the pull the trigger now or later.

The latest headlines have been bad. China now outlawed all crypto transactions and bitcoin took a dive to re-test the $40K area.

The market’s sentiment is negative. But are investors too negative?

Back in January, bitcoin was simply on a tear and hit $40K for the first time.

In fact, it rose over 100% in just three weeks from mid-December to January 8 – with Twitter cheering on “bitcoin to $100K!”

But from a risk/reward ratio, that was actually the peak…

Even though it continued higher above $60K, that ratio was already pointing to the potential for the start of a decline phase. 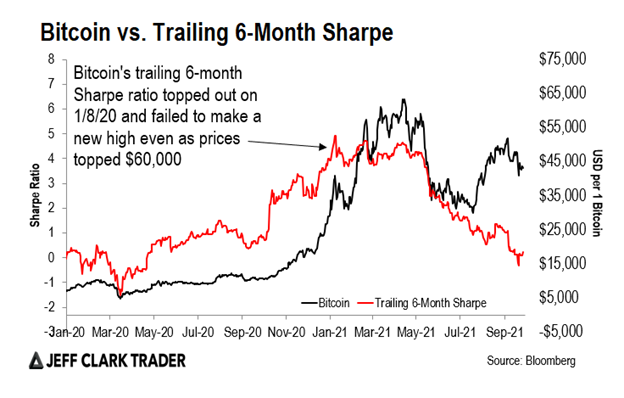 On January 8, 2021 this ratio topped out and never recovered… even though bitcoin itself rose another 60%.

But the question is, why did it top out at a Sharpe ratio of 5 and not higher?

Common sense would tell you no asset is pure reward. A 5 on the Sharpe ratio means for every dollar risked, you make 5…

Those odds just don’t last long in the market. When that happens, investors flock to an asset… and eventually there ceases to be any upside.

But a 5 also seems to be the high for other assets as well. To see what I mean, take a look at this same ratio, but for the S&P 500… 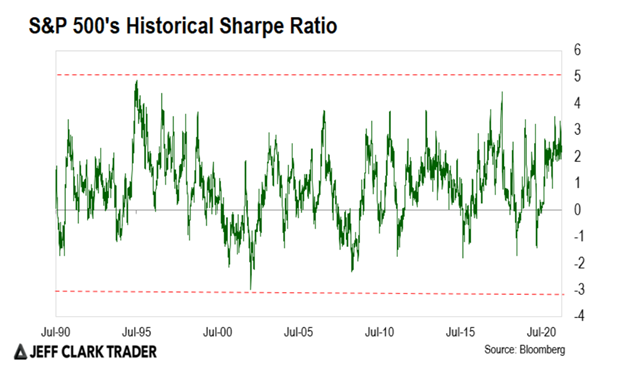 Like clockwork, it tops around 5 and bottoms around -3 (red dashed lines).

The S&P 500’s Sharpe ratio has been in the exact same range as bitcoin, with a low around -3 and a high around 5 since 1990. That mirrors bitcoin’s historical range.

To me, this is just another proof point that bitcoin is just another macro asset (as we described a few months ago)… it’s become another cog in the asset allocation machine. And the fact that both bitcoin and the S&P 500 actually have a similar risk/reward profile historically speaks volumes.

Like other assets, it will get ahead of itself and will get too oversold… and that’s just fine with me. Because what I’m seeing from a risk/reward perspective is that it’s no different (headlines aside) than the S&P 500.

And this is partially why I recommended strategies that profit from range bound prices on September 10. I stated:

I’m still looking for bitcoin to consolidate from $42,000 to $48,000, and selling out of the money calls and puts for crypto stocks like Marathon Digital Holdings (MARA) and Riot Blockchain (RIOT).

After bitcoin’s big bounce from $30K and $48K, it just didn’t feel as exciting to add new capital to a long bitcoin position… And that means that Sharpe ratio just wasn’t low enough for me, and it’s still declining.

After all, the higher the ratio, the lower the upside. Assets with a high Sharpe ratio typically just don’t have much left in the tank…

But at a Sharpe ratio of zero, long-term bulls should get excited about bitcoin hovering around $42K.

Nit-picking traders like myself might want to forecast that those Sharpe ratios may get a bit more negative before bitcoin explodes back up.

But as long as you think bitcoin is a viable asset that will be around for the long haul, the Sharpe ratio chart is much more telling than prices alone – and it’s getting a little too stretched to the downside.

Where do you think bitcoin will move long term? Will the volatility caused by negative headlines eventually subside?