Bitcoin’s recent plunge to $30,000 was fast and furious… But, that shouldn’t have surprised anyone.

While some people consider bitcoin to be the new gold, it’s still mostly driven by momentum.

That means buyers are willing to keep buying, even as the price goes higher.

And when it loses that momentum – for whatever reason – the price goes in the opposite direction, and fast.

Jeff warned about this lightning-fast crash a little over a week ago:

That’s an unpopular opinion. Just about everybody is bullish on bitcoin. Folks with a lot more money than me are calling for the “King of Cryptos” to hit $100,000 by the end of the year.

And, that may indeed happen. I just think it’s going to get whacked down to $30,000 first.

It was a timely prediction. So, how did Jeff know it was coming?

He used a simple, yet effective technique to identify a potential point in the market where the momentum could end.

But Jeff saw other clues to suggest that the bitcoin price would fall. That’s because he also uses a fundamental approach:

But that’s in the past. So, what happens next?

The Real Driving Force Behind Bitcoin

To answer that, we should look at what actually drives bitcoin’s momentum. Some people say that pop culture or news headlines drive the momentum… Maybe in the short term.

The real driving force behind the momentum are the “bitcoin whales”…

Whales are big holders of bitcoin. So if they give up on it… It’s all over. With that, it pays to watch what they do.

So, how do you know when the whales are influencing the market?

As the website, cryptoquant.com explains, “The higher the premium means Coinbase whales accumulate Bitcoin despite the high price.” Meaning, when bitcoin is more expensive on Coinbase, it could be a sign that the “whales” are buying.

The reverse is true when it trades at a discount.

The chart below shows how this relationship has played out… 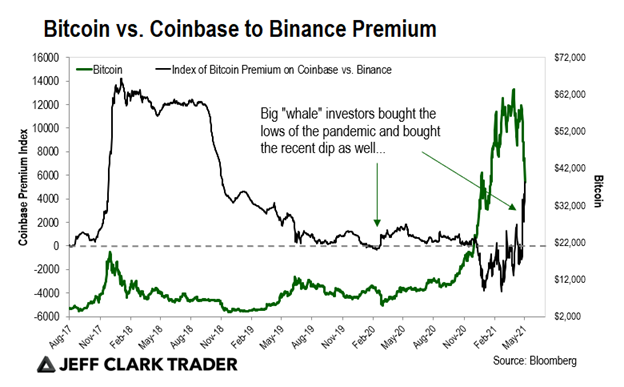 I created an index that tracks the premium of bitcoin on Coinbase vs. Binance. The index measures the daily accumulation of the difference between these two prices.

And when these lines diverge, eventually bitcoin’s price follows. This was a big warning sign when bitcoin hit $40,000 for the first time.

Although the price went up, it wasn’t accompanied by a spike in the Coinbase price premium.

At $65,000, it was even more questionable. To me, it’s a sign of smaller investors getting drawn in by headline hype.

Importantly, the interesting thing is to see what has happened after this recent fall. Because as the price has collapsed, the Coinbase premium kept rising, signaling that the “whales” bought this big drop.

It could oscillate within the $30,000-$47,000 range for a while, before potentially getting to around $80,000-$100,000. The recent spike in the premium between Coinbase and Binance looks like it may lead to a new round of momentum… And bitcoin needs momentum.

I became an Alliance life member after success with Jeff Clark Trader. It’s like Jeff has been teaching me how to fish. I look to each trading day for the wise counsel and nuances provided by Jeff.

The Mastermind course got me going to financial independence and none too late since next month I’ll be turning 90 years old. I appreciate your service and the blood and sweat poured in.