After spiking sharply higher in early February, the Volatility Index (VIX) has been caught in a steady drift lower. The VIX closed yesterday at 12.79. That’s up more than 20% since the start of the year. But, it’s way down from the February high near 38.

Many traders are wondering if the VIX has fallen back into the same, subdued trading pattern it was in for all of 2017.

I don’t think so.

Make no mistake… volatility will be higher this year than it was last year. Despite the recent decline in the VIX, the index is still well above last year’s average level. And by the look of the daily chart of the VIX, I suspect we’ll soon get a sudden spike higher. 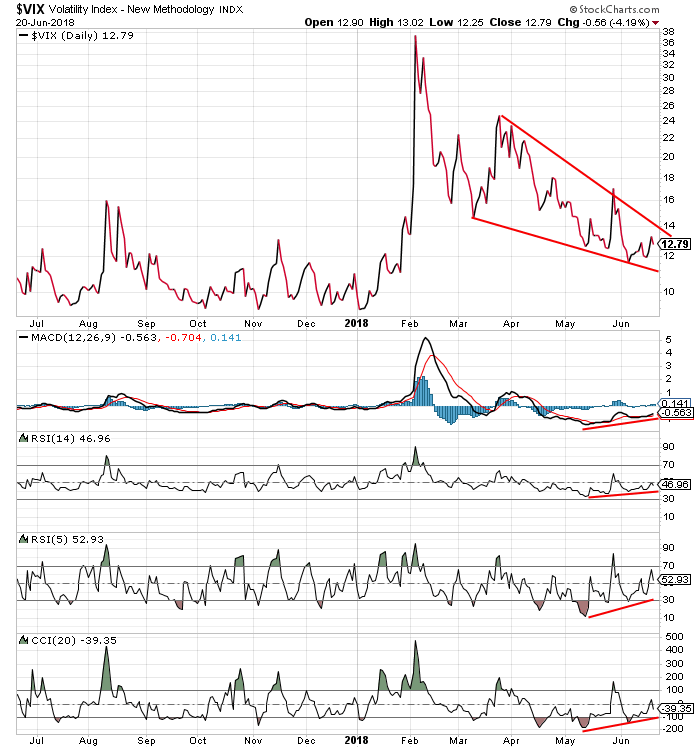 This chart is tracing out a bullish falling wedge pattern with positive divergence on several technical indicators. This sort of pattern almost always resolves higher.

This is a large wedge, and the index is quite far away from the apex (where these types of chart patterns resolve). So, the VIX is probably going to chop back and forth between the support and resistance lines of the wedge for several weeks before it eventually breaks out to the upside.

Right now, the VIX is smack-dab in the middle of the pattern. That’s partly why I’ve been arguing for a high cash position. This setup simply does not offer a high-odds trade in one direction or the other.

If I had to guess (and, admittedly, this is what I would like to see happen), the VIX will spike higher and approach its resistance line over the next several days. That will create oversold conditions in the broad stock market. Maybe it will coincide with the S&P 500 falling towards 2740 or so.

If that happens, and if we finally get oversold conditions on the daily S&P 500 chart, then that should create the setup for a strong summertime rally. That rally could propel the S&P to its final bull market high. And it could cause the VIX to drop back down to the support line of the wedge pattern.

That’s where we’ll have a remarkable opportunity to short stocks.

For now, I’m looking for the VIX to press higher in the short term – meaning the next three or four days – which should coincide with the S&P 500 dropping back down towards Tuesday’s low of 2743. At that point, I’m hoping we’ll get the sort of oversold technical conditions that support an intermediate-term rally phase for the stock market.

Today, readers give their take on where gold is headed…

Jeff, you are one of the very few prognosticators whose views I consider in trade placement. But I think one of your main strengths – your ability to look historically at a situation – is messing you up along with other gold bugs.

The world changes. How many hundreds of billions of dollars are now in crypto? Much of this money would be in gold, creating the demand and price bumps you look at historically. But not this time…

Jeff, you are mostly a TA guy. This article says so. Just because there has been a “pattern” of gold and silver increasing in value during the mid-June to perhaps September time period does NOT mean that it “may” happen this year. The feel of the gold price is awful. There is no interest whatsoever from institutional money.

Gold has NOT served as a safe haven during market dislocations so far this year. Cry “wolf” too many times and nobody listens anymore. Investors are tired of buying gold equities in turbulent times only to have to sell when their prices come straight back down for losses.

Investors have so much more to choose from with companies that have great businesses, buy back shares, pay good dividends, and have products that may actually be attractive to traders and investors and that have betas that can create attractive trading and investment opportunities. Gold and silver equities do not have those qualities any longer right now in the eyes of traders.

Gold equities and the actual price of gold have been worse this year than the last 2-3 years. The early rally this year was much shorter than in previous years. Tying up valuable capital in assets that do nothing but go down makes little sense to anyone.

Just taking the other side of reason here. Many very bright folks have predicted a major move for gold this year. You are one of them, but your special trading qualities – TA and timing – have always been very good for gold and silver. But so far, no bueno.

Having written all this, I am in your camp regarding the value of gold and silver plus the equities. It has been much too expensive for me up to this point, as timing has evaded every one of the gold bulls for way too long to really trust anything anybody says. Cheers and I hope we get this one correct.