What can the Japanese yen tell us about American stocks?

Well, as it turns out, quite a bit.

The Japanese yen has long held a reputation for being a safe-haven currency.

Meaning, when traders are feeling uncertain or fearful, the yen tends to appreciate while risk-on assets like stocks tend to get sold.

But why would the currency of another country be so attractive when the market gets scared and investors duck for cover?

You see, after the end of World War II, Japan became a manufacturing and exporting giant. This growth led to a bubble that eventually popped in 1990.

Since then, Japan’s economy has stagnated, with growth above 2% being very hard to come by. The Bank of Japan (the country’s central bank) has tried in vain to stimulate economic growth by slashing interest rates.

These two developments have resulted in the yen taking on a special place in investor portfolios.

First off, Japan is considered a creditor country. That means investors, both foreign and domestic, will borrow from Japan due to its historically low interest rates. They’ll then take that cheap money and invest it into higher-yielding assets overseas.

The theory is that when investors get spooked by risk-off events (such as when stocks are selling off), they’ll be tempted to sell their own stocks as well. This is what leads to the powerful herding behavior that drives all financial markets.

It’s simple… the money flowing out of riskier assets (risk-on) makes its way back to yen as the borrowers repay their loans. With an influx of yen, the currency then rises in value.

But my more cynical answer is that while these fundamental reasons were valid in the past, the present reality of globally low interest rates and an evolving global economy likely makes the issue more nuanced.

That’s because investors are creatures of habit. If you’ve ever traded foreign currencies (forex) before, then learning about the yen’s safe-haven status is one of the first lessons you’d come across.

So I suspect that it’s largely market sentiment and habit that’s responsible for the ongoing correlation between the yen’s performance relative to the stock market.

And as long as that correlation holds, we can make use of the yen’s behavior to figure out whether there’s potential for volatility in stocks. 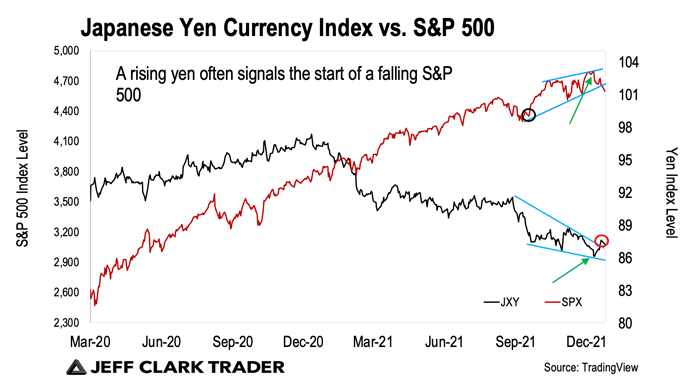 I’ve overlaid the Japanese Yen Currency Index (JXY – black line) with the S&P 500 (SPX – red line). The two have enjoyed a strong negative correlation. So when the S&P 500 is trending higher, the yen index tends to sell off.

This is exactly why it has my attention now…

Notice how the S&P 500 and the yen are now tracing out mirror-images of the same pattern.

This pattern is called a wedge, and it often signals a reversal in trend. Wedges have two converging trendlines that’ll contain the price action until there’s a breakout…

The yen index broke out of its wedge on January 12 (red circle). That should’ve been a warning signal for the stock market.

The S&P 500 broke below the supporting line of its own wedge in yesterday’s trading.

This means the yen was a leading indicator for the volatility in stocks.

Now that we’ve broken below the supporting line of this wedge, stock markets could be in for a bit of a wild ride.

Once a wedge breaks out, prices typically travel back to the start of the wedge.

So, if this pattern plays out as I expect, the S&P 500 could drop all the way down to the start of the current wedge pattern near 4306.

Have you ever traded foreign currency? Or do you mainly follow the U.S. stock market?