Fundamentals are the easy part of finance… These are tangible factors like profitability and growth. Anyone can find these numbers online, on websites like Yahoo! Finance.

Behavior is harder to quantify. Behavior comes down to investor emotions, which are intangible. You can’t find it on Yahoo! Finance… You have to dig a bit deeper.

Hype, however, is a specific type of behavior that’s useful to understand…

It’s the main cause of fundamentally sound traders losing money. That’s because, these types of traders are often right… Just at the wrong time.

Spotting over-hyped trades is difficult and subjective… So today, I’ll share my blueprint for identifying hype, sidestepping it, and profiting from the dislocation it causes.

The way I account for hype is by using an alternative data set that tracks social media mentions of a particular stock.

The key is to wait for a spike in social media mentions and let prices either reject or accept the reaction. When prices diverge from this spike, it’s usually time to get contrarian. And, social media tends to be loudest right at the end…

In other words, when a lot of people are talking about a specific stock, but the price isn’t reacting accordingly, it’s likely because they’ve all bought it already.

I compare this to the feeling you get at Thanksgiving… It’s like how even after you’ve eaten your fill, food is still on your mind, but there’s no more room.

And in finance, when all is known, there’s no more room for new buyers to push prices higher, and nothing left to sell to send prices lower… But that won’t stop the market from talking about it.

This is what “priced in” really means… There’s no greater evidence of “priced in” than when social media sentiment reaches a crescendo.

Take Plug Power (PLUG). It spiked 331% since the election through mid-January.

But the problem was, it ran away from fundamentals. Its forward-looking price-to-sales ratio (P/S ratio) reached 76. To put that into context, of the nearly 3,000 stocks listed on the New York Stock Exchange and Nasdaq, only 90 had a higher forward P/S ratio… And of those, PLUG rose 2x more than any other name since the start of 2021.

This is where hype rears its ugly head and traps investors. All three criteria – news events, prices running too hot, and a social media explosion – were met on January 13… Setting up a “hype profits” opportunity.

That day, news came out about the PLUG partnership with French automaker Renault to supply hydrogen-fueled delivery vans in Europe. This sent the stock into overdrive, but it failed to close higher than where it opened…

Check out the chart below… 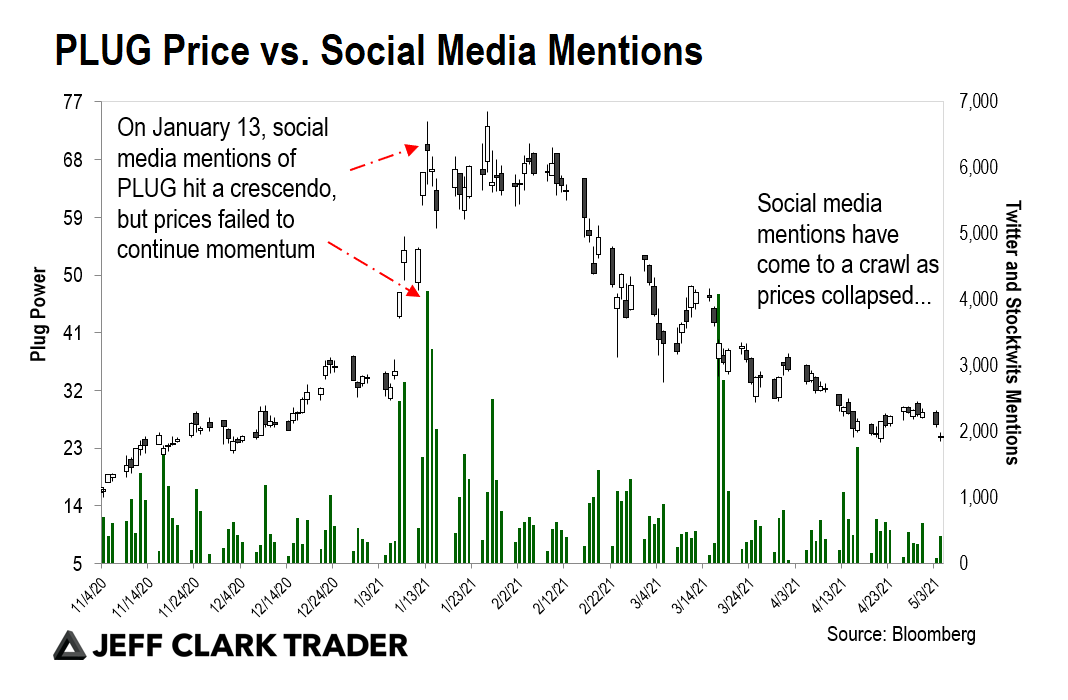 The next day, it opened 4% lower. And despite the partnership news, PLUG has fallen 62% since.

Notice how social media references have come to a crawl as prices have collapsed… That’s also a behavioral aspect of trading.

Right now, I’m actually looking for social media activity to pick up and trigger a new long position. It’s fallen far enough… Plus, no one’s talking about it anymore. That’s a good sign.

Any additional weakness would likely come from a general market selloff, which I would view as a buying opportunity.

Plus, its median analyst price target remains above $50, as it did on January 13. The difference is, with the stock trading for less than $25 now, there’s more than 100% reward for the risk you take at current levels… As opposed to when it was trading at $69.50 on January 13.

Profiting From the Dislocation

In general, this spending is good news for the broad market.

And, the market responded accordingly. The SPDR S&P 500 ETF (SPY) gapped up the next day to open almost 1% higher.

But despite the good news and social media fanfare, SPY closed lower than it opened. The next day, it gapped down 0.6%, triggering a sell signal on my system. As I write, SPY is down nearly 2% since Biden’s speech.

Getting into hyped-up, crowded trades can feel good emotionally, but rarely pays.

Being a contrarian in these situations, while difficult, can often produce the greatest returns. This is why behavioral finance stands at the forefront of economics.

I’m going to flag any “hype trades” opportunities for you, as they come. But in the meantime, take a look the iShares Global Clean Energy ETF (ICLN)… Once social media activity picks up, this portfolio may quickly come back in vogue.

P.S. There are plenty of different systems traders use to track the next big trades. And, last Wednesday, I tuned into Jeff Clark’s presentation on what he calls his FLIP trading method to learn more about his trading techniques.

During the presentation he went in-depth on how it all works, and how it has allowed some of his readers to see gains of 131%, 148%, and even 158% in just a few weeks.

But don’t take just my word for it, you can try it out yourself since Jeff gave away three free trades that’ll help you get started on using his method. But, this informative presentation won’t be available for long, so just click here to get started.

Very interesting analysis. What’s the best way for anyone to calculate this number? My guess is to use the real-time 30-year Treasury yield for one side, but when it comes to inflation numbers there seems to be a lot of ways to derive that number.

Can you tell me a simple way to get the right number?

Thank you, Terry, hope it helps. A good place, and a general research hub, is the FRED Economic Data resource. You can play around with a lot of data here, if you’re into it… And it offers an Excel add-in.

As a product, investors buy something called Treasury Inflation Protected Securities (TIPS). The yield on this is the real rate, which you can find here. And, investors buy it if they think inflation will outpace the nominal Treasury rate.