More and more, I’m noticing that bitcoin is becoming just another macro asset.

As institutional adoption rises, bitcoin loses the unique qualities that have made it so uncorrelated in the past.

But as it matures, it also presents more opportunities…

Underneath all the hype and wild price swings, there’s been one consistent macro factor that affects its price. And while few people are talking about it now, it will gain more attention over time…

This relationship has hidden behind its meteoric rise, and infamous crashes. And now, I’ll show you how it works… And why today is an important day to get familiar with it.

What I’ve noticed is when the trend in real interest rates falls, bitcoin rises – and vice versa.

As that rate broke below zero early last year, the fear of rampant inflation took over markets. And as you may know, bitcoin is often considered a hedge against inflation – a new, digital gold.

With this in mind, it’s especially interesting that the 30-year real rate fell below zero on March 23, 2020… The lows of the pandemic crash. And since then, bitcoin has risen over 750%.

The chart below shows this relationship in action… 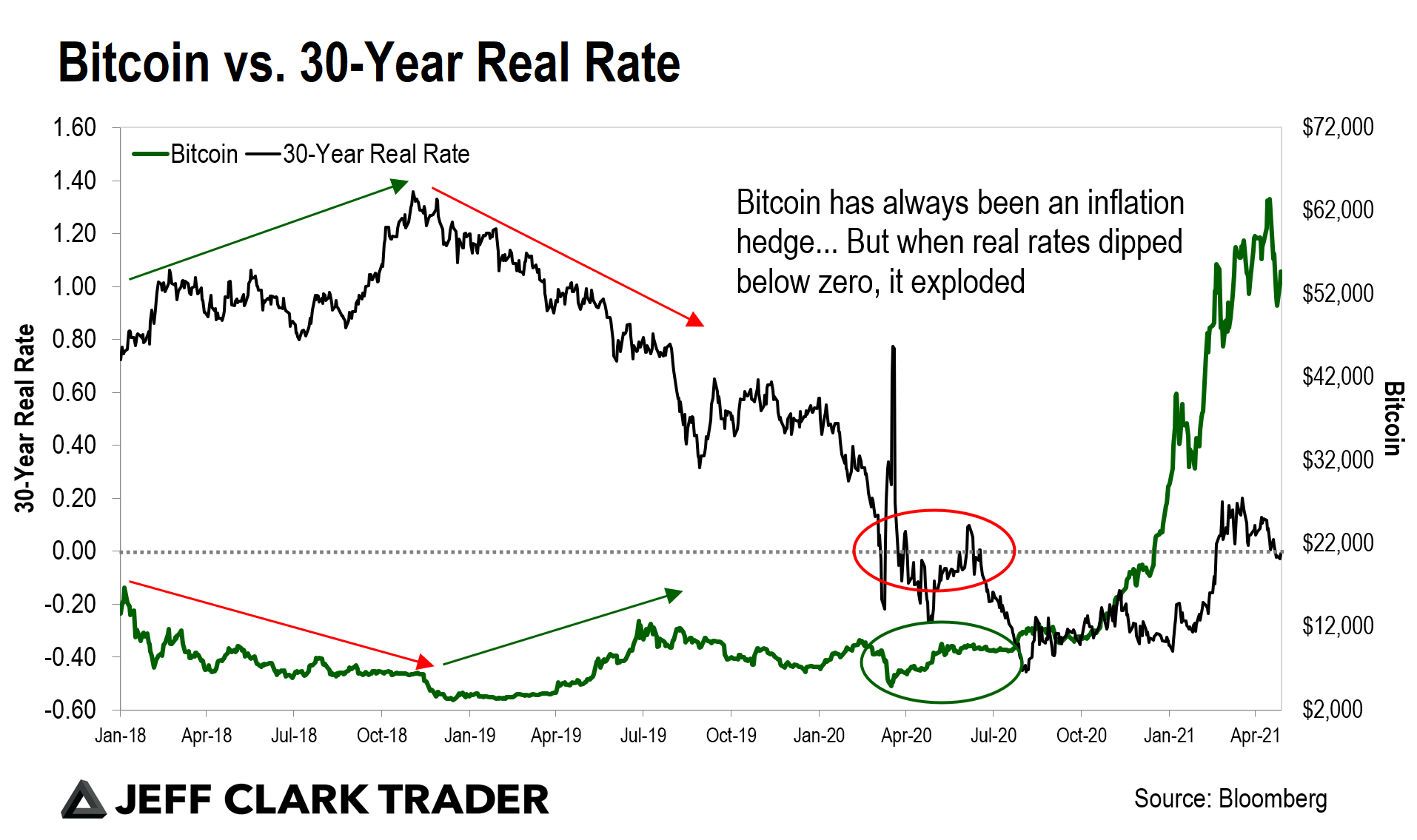 Based on this relationship, it’s not a coincidence that bitcoin’s rally has stalled since mid-February. The real rate has picked up steam and bounced back above the important psychological level of zero.

But this seems to have been a short-lived rally, as rates are back down below zero, continuing their downward trend… Just as bitcoin fell from its highs as a result of being over-hyped by the Coinbase IPO and the Turkey ban on crypto.

Sunday night, bitcoin found support at the $47,000 area and is now trading 17% higher. And you’ll recall from last week’s essay that the volume profile recognized this level as support. But, aside from that technical area playing a role, it only made sense that bitcoin would find support there – as the real rate has been dropping again.

The Coinbase IPO bust and the Turkey ban have played their part in driving down prices… But in my opinion, the next big driver will be which way the real interest rate will go.

Today’s Fed meeting will undoubtedly have a big impact on this – it always does. But there is another factor at play.

Right now, it seems that inflation has nowhere to go but up, and should support inflation-linked assets like bitcoin. As we’ve said before, commodities drive inflation. And with the Commodity Research Bureau Commodity Index now up 18% for the year and 7% just this month, it’s clear that inflationary pressures are here to stay.

The simple way to play these recent developments is to watch how the interest rate development unfolds after the Fed meeting on Wednesday. If the 30-year real rate continues to trade below zero, this could cause bitcoin to reach new highs, possibly around $75,000 by July. I will be a buyer above the $58,000 level for the technical reasons outlined last week. The recent surge in commodities will only help.

On the other hand, a positive interest rate reaction on Wednesday would be bearish for bitcoin… It could send it right back to retest Sunday’s low of $47,000, and may force it towards its 200-day moving average at $38,000. This would set up one of the biggest buying opportunities bitcoin will see going forward… because even if it gets there, inflation is here to stay.

As bitcoin gets more and more institutional attention, the impact of interest rate fluctuations will be more pronounced. And as it matures as a macro asset, its reliability as a momentum asset will diminish.

That’s why using traditional chart indicators on bitcoin, like patterns and moving averages, will no longer be enough. Traders should get familiar with this real interest rate relationship before attempting any short-term bitcoin trades, and be prepared to react accordingly to today’s Fed meeting.

P.S. It’s not just bitcoin that moves higher on lower real rates. As cash quite simply becomes trash, small and big investors alike are reaching for returns anywhere they can… And that has meant that all through the pandemic, thousands of stocks have been soaring, creating a “new army of investors.”

I hope Market Minute readers learn more about my colleague Jeff Clark’s unique FLIP trading method that has guided him into gains of more than 200%… This market environment is ideal for his particular methodology… It’s driven by momentum and fueled by the Fed… Higher valuations alone cannot stop this trend.

Just by using this system, his subscribers have received gains of 131%, 148%, and 158%. The kicker for me is that these companies are fundamentally sound, and actually undervalued in a market that has gone insane.

So, I hope you will watch tonight when Jeff will be hosting a special presentation where he’ll share his FLIP trading method – and even give away three picks, just to get you started – completely free. So, click here to join him tonight at 8 p.m. ET to get in on this opportunity… You don’t want to miss it.