Editor’s note: Regular readers know our goal here at the Market Minute is to take advantage of short-term moves in the market. That’s why, in this special weekend edition, we’re sharing a timely investment opportunity from Bonner & Partners’ chief tech analyst Jeff Brown.

Jeff uses his decades of experience in the tech sector – and his insider connections in Silicon Valley – to identify tech companies poised for exponential growth. Today, Jeff shows that America is facing an unprecedented crisis… one that a group of small tech companies is fighting to solve.

To be clear, I’m not talking about infrastructure like roads, bridges, or canals. In fact, you might argue that the infrastructure I’m referring to is far more important.

That’s because it’s at the center of modern society. How we do business, shop, and communicate depends on it. In fact, I’m certain you use this infrastructure every single day.

I’m referring to America’s wireless networks—the vast systems of cell towers and fiber optic cables that make it possible for you to get online.

And unless this is corrected soon, it could have dire consequences for America’s economy and national security…

Evolution of a Network

Whenever you connect to the internet on your computer, smartphone, or smart TV, a vast physical infrastructure makes that connection possible.

For instance, there’s a 500,000-mile-long network of fiber optic cables beneath the Atlantic and Pacific Oceans. They carry most of the world’s internet traffic. These transoceanic cables connect to vast land-based fiber optic networks, which, in turn, connect to consumers’ homes and businesses.

Over the years, this massive network has evolved. Companies and governments built new infrastructure to support the next generation of wireless connectivity.

We built out the 1G (first-generation) network in the 1980s. Compared to what’s possible today, it didn’t allow you to do much. You could only place voice calls—there was no layer for carrying other types of data. And you had to use one of those brick-sized cell phones Gordon Gekko yaps into in the movie Wall Street.

Then, in the 1990s, we got 2G. With it, you could send and receive emails and text messages.

Next, in the early 2000s, 3G brought faster connection speeds. The quality wasn’t always the best. But for the first time, you could stream video and audio.

Finally, we got the network we use today—4G. It went live at the start of this decade.

But today’s 4G network faces a problem. It can be summed up in one word: data.

Both consumers and businesses have a seemingly endless thirst for consuming and sending more data over wireless networks.

The chart below shows the amount of data and voice traffic over the world’s wireless networks since the third quarter of 2012. 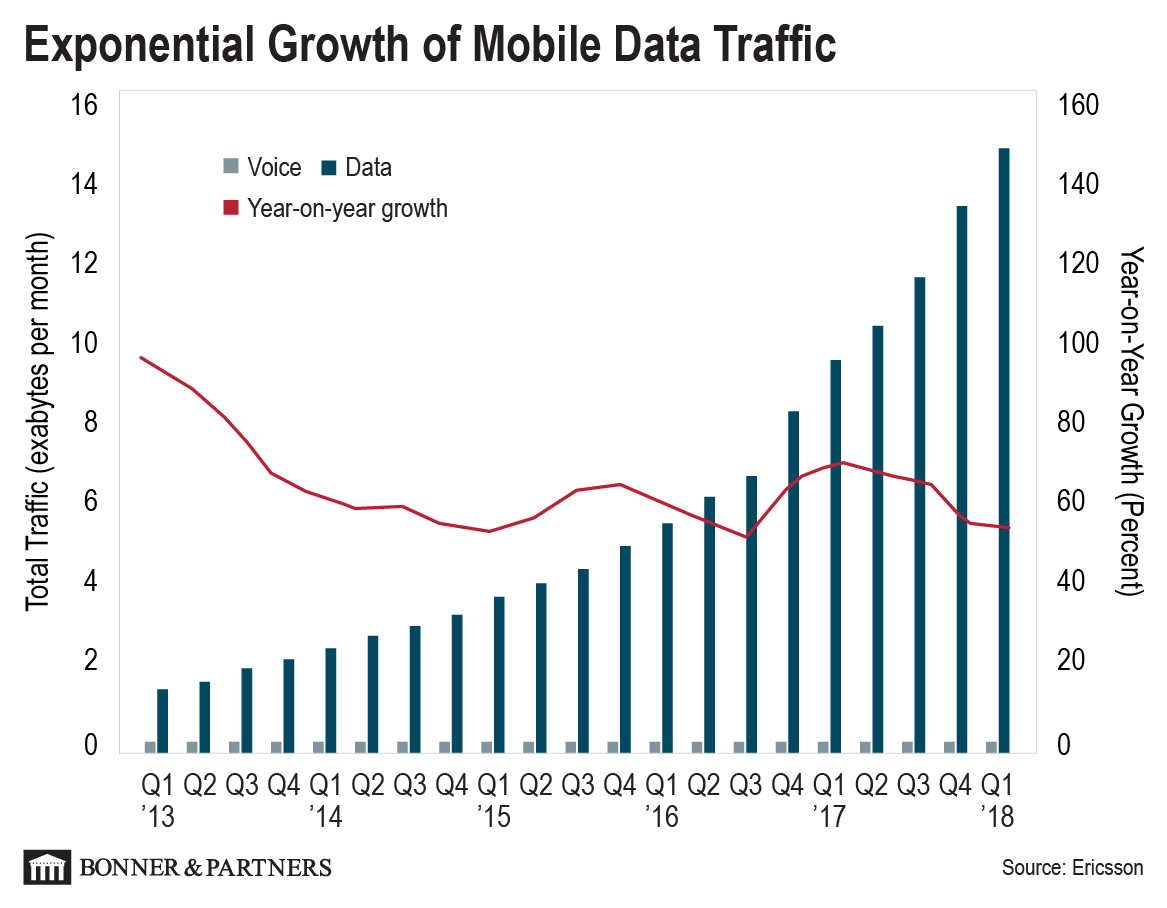 In the third quarter of 2016, we sent roughly seven exabytes of data per month. An exabyte is equivalent to 100,000 times all the printed material in the Library of Congress. All the words ever spoken by human beings can be contained in five exabytes.

It’s hard to get your head around.

But a year later, we sent nearly 12 exabytes of data—per month. That’s an annual growth rate of about 70%. And data traffic is expected to double in the next 18 months.

Have you had a dropped call in the last 12 months? Or how about when you dial a number and someone picks up, but you can’t hear them? Has the internet been slow to download a web page? Can’t seem to download or send your email?

These issues are almost always due to network congestion. Just like when there’s a traffic jam on a highway and the cars aren’t moving… there can be too much data on a wireless network—and the digital packets of information just can’t get to where they are intended to go.

And it may surprise you to learn that this problem is rather unique to the U.S.

With an average download speed of 10 Mbps (megabits per second), the U.S. has some of the slowest internet speeds in the world.

[Megabits per second, or Mbps, is a common measurement for internet connection and download speeds. For example, to stream a high-definition video from Netflix, you need a download speed of at least 5 Mbps.]

We’re in 50th place, behind Romania and Finland. Even Dracula and the reindeer have internet speeds faster than most Americans.

Why is this such a big deal? 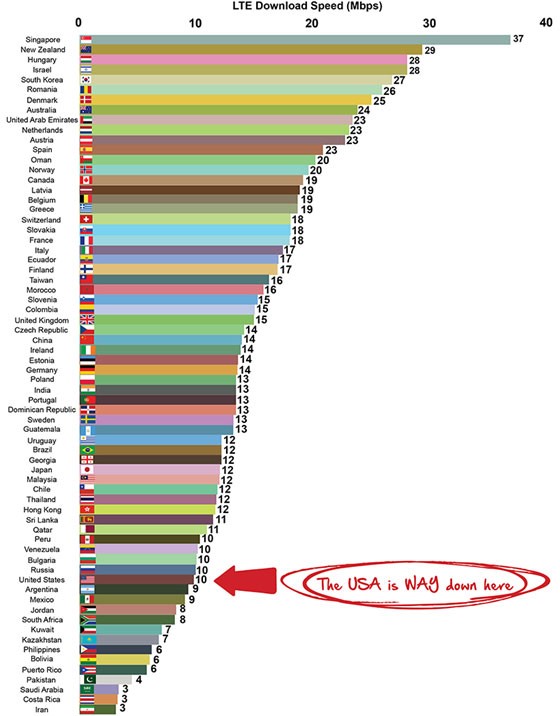 At an economic level, it’s a significant competitive disadvantage. Work and digital services are mobile these days. Many companies have a “mobile first” strategy that prioritizes access to products or services via mobile devices like smartphones.

Fortunately, help is on the way…

The Future of the Internet

As I write this, we are in the midst of a new communications infrastructure buildout. New towers are going up. New fiber optic lines are being laid.

The purpose of this buildout is to upgrade America’s failing communication infrastructure to the next generation of wireless connectivity: fifth-generation, or 5G.

With 5G, the peak speed jumps to 10 gigabits per second (Gbps). One gigabit is 1,000 megabits. So at peak speed, 5G will be 1,000 times faster than the average 4G connection we have today.

With that kind of speed, you’ll be able to download a two-hour movie in 10 seconds. Dropped phone calls and slow-loading web pages will be things of the past.

Plus, some previously “sci-fi” tech will finally become a reality. Technologies like self-driving cars, virtual reality, and holographic projection will all operate over high-speed 5G connections. The applications are endless.

5G is a game-changer because of all the technological innovation it will bring about.

I also estimate that 5G will create an additional three million jobs. That includes jobs associated with building and maintaining the wireless networks, as well as jobs associated with products and services that will be created thanks to the high speeds of 5G. It will also add about $500 billion in U.S. GDP growth.

And here’s the thing… While the infrastructure buildout will take years to cover the entire country, 5G services are ready to launch in a handful of cities, starting in a matter of weeks.

Verizon recently announced that 5G would be available for homes located in Houston, Los Angeles, Sacramento, and Indianapolis starting October 1.

And if you’re hoping to gain exposure to this trend, one option is to invest in the companies responsible for building and maintaining the infrastructure needed for 5G wireless networks.

It was instrumental in the 4G buildout that started in 2011. And it’s also heavily involved in erecting and maintaining the towers used in the 5G buildout.

The chart below shows the performance of AMT from 2011, when the 4G buildout started, to today. 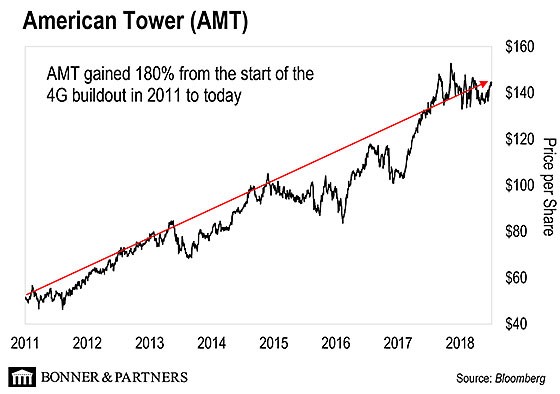 I expect American Tower will continue to climb as the 5G infrastructure buildout continues.

P.S. The 5G infrastructure buildout is a watershed moment for technology. When all’s said and done, it will completely transform our society…

You’ll never need to drive yourself anywhere again. Surgeons will be able to perform emergency procedures on patients on the other side of the world. And we’ll no longer have to depend on our smartphones… all the information will display right in our field of vision.

What’s more, the world economy will grow by trillions of dollars. And I’ve found a select group of small, publicly traded companies – whose tech is essential to the 5G buildout – that are poised to soar as this trend picks up steam. Get all the details right here.