Jeff’s Note: A new dark turn is quickly approaching the markets… and those who aren’t prepared could suffer huge losses. The last time this event hit – in January 2022 – stocks crashed 20%, 30%, and even 50%.

It has to do with a rare 44-day phenomenon that could wipe out hundreds of stocks across the market. To counter this, I’ve developed a strategy that could help you collect profits… without leaving your money at risk in the market.

On Wednesday, January 25 at 8 p.m. ET I’ll reveal all the details on this strategy as well as the names and ticker symbols of three stocks to target to during this looming crash. Just click right here to sign up.

What’s more impressive is that the gains have been broad-based, and not driven by just a few stocks or one sector in particular. In fact, 10 of the S&P’s 11 sectors are higher on the year.

Naturally, the rally has investors questioning whether the worst is behind us… and if the bear market is hibernating.

But even with the average stock putting up decent gains, the broader indexes are still susceptible to more severe declines.

But that doesn’t mean your portfolio has to suffer.

Getting caught in the downside depends on what type of investor you are and how well you know your portfolio.

A Deflating Bubble Still in Progress

Last year marked the beginning of the end for a massive bubble in growth stocks.

The communications services sector – with stocks like Alphabet (GOOGL) and Meta Platforms (META) – plunged 38% last year… making it the worst sector in the entire S&P 500. The technology sector fell by 28% for the third worst showing.

And the downside could still have a ways to go…

Despite last year’s declines, the tech sector’s weight in the S&P 500 still stands at 23% compared to the long-term median of 16%. 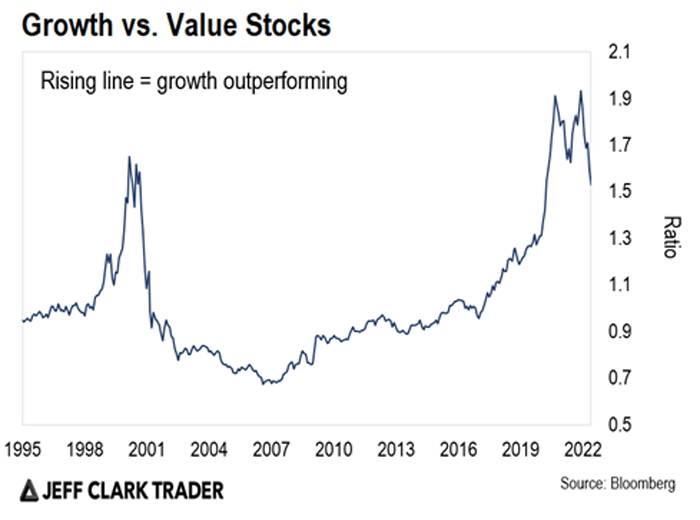 To put the rise of growth stocks into perspective, this chart goes back to 1995. That’s where the deflating growth bubble last happened…

And you can see another one is just getting started.

That should have you concerned – particularly if you’re an investor in index funds like the SPDR S&P 500 ETF (SPY), which tracks the S&P 500.

The S&P is still dominated by big growth companies. In fact, large-cap growth alone makes up 38% of the fund… more than any other category.

But that doesn’t mean you should give up on buying stocks. That’s the lesson from a past bear market.

Sorting Through the Wreckage

You can see in the chart above that the early 2000s “dot-com” era suffered from a similar bubble in growth stocks, which drove up their weight in indexes like the S&P.

And when it came crashing down, the major indexes were dragged lower along the way… similar to what you’re seeing today.

So, if you’re an exchange-traded fund (ETF) investor, make sure you know what you own and where concentrated risk might exist.

But there will still be great prospects to buy stocks in the right areas.

I believe your stock market fortunes (or lack thereof) will be driven by your ability to actively rotate into those opportunities.

Have you been buying stocks during this bear market or are you waiting on the sidelines?