Stocks and commodities rallied… yet bitcoin meandered its way to the finish line.

After recovering most of its losses from another of its infamous weekend flash crashes on December 3, all it’s been able to do since then is consolidate.

As frustrating as this may be for crypto investors used to parabolic gains, this is creating a clear line in the sand for bitcoin’s next move… and that line currently rests at $46K.

Bitcoin Hasn’t Been Moving Much

Each day, the $46K level is gaining more and more significance.

Since that flash crash on December 3, bitcoin has now tested it seven times.

It’s a level we called out the last time we talked about bitcoin on December 7:

…It looks like bitcoin may try and consolidate here and make its way back up to retest $55K. Right now, the 200-day MA is at around $46K, so I expect bitcoin to retest this level a couple of times (at least) before moving higher.

And we knew it would since our cross-exchange price indicator we used showed strong signs of institutional buying at that level.

This was proven true when MicroStrategy recently announced that it bought 1,914 coins for about $90.5 million at an average price of $49,229 between December 9-29.

Although the last flash crash attracted institutional buying, the technical setup is starting to look bleak. 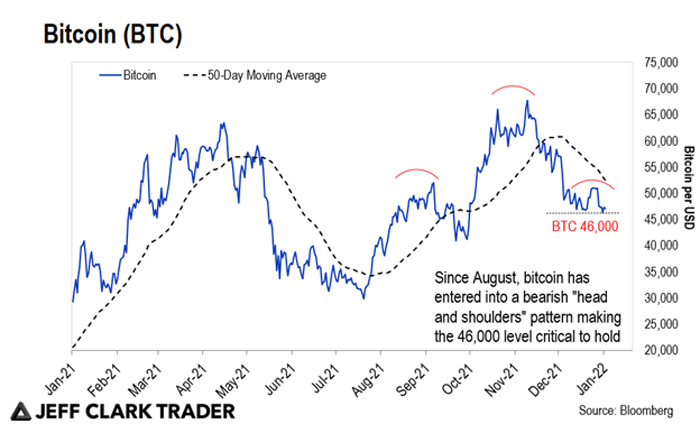 Since August, bitcoin hasn’t done much other than make and reject a new all-time high, causing it to form a head and shoulders pattern.

Normally, when this pattern forms it’s a good bet that once prices break lower they move down significantly.

That would be a stunning development for bitcoin.

But bitcoin has defied chart patterns before…

In fact, the last time it put in one of those bearish head and shoulders patterns back in June it not only recovered but made all-time highs. So, there’s hope in that regard.

But this chart also shows its 50-day moving average, a short-term technical indicator that plays a big role for bitcoin.

You can see how strong bitcoin is when it trades above the 50-day moving average (MA – dashed line), and relatively weak when trading below it.

That’s because short-term momentum is a key factor for crypto.

In February 2021, we explained the significance of tracking short-term momentum.

In fact, that strategy we presented played out perfectly last year…

However, had you simply bought at the start of the year and held until the end, bitcoin’s total return would’ve been only 60% for the whole year.

But an equally important kicker is all the grey hair this strategy would’ve saved. Investors would’ve simply skipped all those 10% intraday drops.

Bitcoin made a run at it in the final two weeks of 2021… but right now, that level is proving to be resistance – which isn’t a great sign.

There’s Another Reason $46K Is Significant…

The current tax laws for bitcoin make it advantageous to sell at a loss and then use that loss to offset capital gains elsewhere in the market.

And since the Internal Revenue Service (IRS) considers bitcoin as property and not a security like stocks, it’s not subject to the wash sale rule… Meaning, bitcoin investors that are sitting on a loss can easily sell it to “book the loss” and then buy it back later.

I believe many investors got whipsawed with bitcoin last year by chasing the highs and selling the lows. As a result, they were incentivized to sell during the final week of the year.

Under this scenario – where the recent weakness in bitcoin was due to tax selling pressure – the weakness in price isn’t fundamental in nature and isn’t a reflection of bitcoin’s viability, investor appetite, or its long-term trend.

It also means that a significant bounce is coming…

We’ve seen investors selling bitcoin, but we have yet to see them buying it back.

And the longer it hovers around $46K, the more worried bitcoin holders should be…

Because if the tax selling narrative is true, then the recovery needs to come quickly.

Right now, I’m waiting for a clear sign that recent weakness is just a result of tax selling. And that sign would be bitcoin closing above its current 50-day MA at $52K.

Until then, the significant downside that the technical indicators are implying is keeping me away from betting on the “tax selling” narrative.

I loved hearing of your survivalist tree! I read it to my husband and we both laughed out loud. Thank you for sharing! Merry Christmas to you and your family.

What would I decorate my survival tree with? Simple and immediate answer… Bitcoin. Lots of little bitcoin “coins.”

It’d have to be a live tree. Then I’d find little guns, ammo boxes, deeds to rural land, and second passports. Lights would be powered by a little generator, fueled with home grown bio diesel fuel. Below it, I’d make a little community with crops, animals, and such. There would be a library chock full of survival information.

Dear Jeff, thanks for shedding a lot of common-sense light on this subject. I used to hold market makers in a less-than-favorable opinion (about at the level of pigeons). That was until I learned what you pointed out; they have to buy shares to cover their side of selling a call option.

Just like when I learned pigeons scavenge a lot of organic matter that would pile up pretty deeply if not for their not-very-finicky eating habits.

I like your ideals of thinking, I found myself doing just that. I’ll let it go and what comes, comes.

Jeff, good reference and good words. However, you didn’t tell the audience what happens next. Lot’s two daughters got him drunk to perpetuate the family name! Happy trading.

Jeff, thanks for reminding us that the bible deals with wealth and human nature. We would be wiser for studying the principles and applying truth to ourselves.