The $30K level was crucial for bitcoin.

…that it can protect your portfolio from rising inflation…

…that it’s the new gold…

…that the “whales” were buying the dip…

…and that it’s beyond China’s reach… and beyond the U.S. government’s reach, too…

And that’s exactly what happened, over the last month, bitcoin has held that level on three separate occasions.

And during the height of its freefall from the highs on April 14, many traders were calling for bitcoin to fall all the way down to $15K – a 75% plunge from its peak.

The first thing to understand is this…

Momentum is a big part of assets still in their infancy, like bitcoin. As I wrote here, when momentum stalls, the trend can turn fast.

But, once an asset becomes a mainstay in people’s portfolios – as bitcoin is becoming now – it can’t lose most of its value in the span of two months and still be considered “legit.”

It’s just not something investors in the institutional community signed up for. And, whether the HODL (Hold On For Dear Life) crowd likes it or not, institutional interest is the only thing that will get bitcoin to $100K and beyond.

If investors can’t hang their hats on an asset’s validity, then that asset is no different than “meme” stocks like AMC, GameStop, and Virgin Galactic. And that brings us back to the traders I mentioned earlier, who were calling for bitcoin to fall down to $15K.

Take a look at the chart below. It shows what technical traders call a “head and shoulders” pattern… 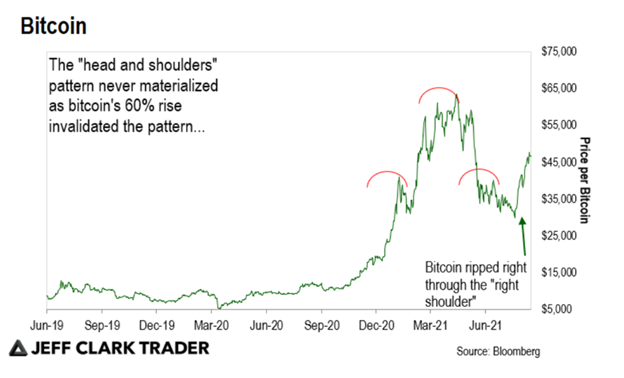 It’s a chart pattern where if you squint your eyes just right it resembles something of… well… a head and two shoulders (red lines above). Traders use this pattern to forecast a change in the trend from bullish to bearish.

Back in June, the head and shoulders pattern was telling many traders that bitcoin was going to freefall to about $15K or less.

But bitcoin made a statement…

But now that bitcoin has made its statement, what’s next?

The indicators Jeff Clark and I watch are signaling that the speed of bitcoin’s recent breakneck rise is about to pause. This is based on three things.

First, is our “whale” indicator. They’re the big, institutional players. So, my premise for calling the $30K bottom was all about the whales.

When institutional investors buy bitcoin, they usually do it through the popular crypto exchange Coinbase. At the bitcoin conference on July 21, investment manager Cathie Wood made that clear when she revealed she uses Coinbase to buy bitcoin – just like other institutional bitcoin investors.

Seeing the way premiums on Coinbase were jumping when it briefly breached $30K was an indication that the lows were in.

It made me ignore all the other noise and just focus on the whales. Generally, when the whales are buying… prices are supported.

But recently, with prices back above $45K, I haven’t seen the same enthusiasm from the institutional crowd that I saw around $30K.

Then, there’s the volume profile indicator we introduced in a previous Market Minute. This indicator helped call the drop in bitcoin at its highs and pinpointed where the lows would be. 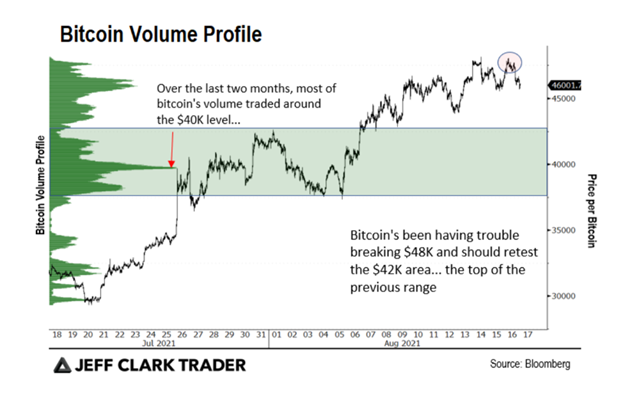 By looking at the circle, you can see bitcoin has tried to break that $48K level three times over the last week – unsuccessfully.

This tells me momentum is stalling and bitcoin will want to test support at a lower level. That lower level could be the highs of the previous range – the green shaded area on the chart.

But there’s also a third indicator Jeff and I follow to forecast where bitcoin might head next over the short term. And that is bitcoin mining stocks.

Bitcoin mining stocks like Marathon Digital Holdings (MARA) and Riot Blockchain (RIOT) have struggled over the last few days. They’ve been falling (down 8% and 7% since August 8, respectively), even though bitcoin actually saw a modest increase.

As Jeff notes, producers of a commodity – like oil, gold, or in this case, bitcoin – tend to lead the underlying commodities themselves.

If that’s the case, given the lack of enthusiasm at $48K, bitcoin could head lower over the short term.

Going by our volume profile indicator above, I expect it to start consolidating (or trading in a range) between $42K and $48K before it goes higher to challenge its all-time highs.

So, there are a few ways to play this…

For seasoned option traders, a choppy market is a great time to sell out-of-the-money options on both calls and puts. Combinations of bear call and bull put strategies could work best for bitcoin mining stocks.

For traders that bought the lower $30K area, this could create an opportunity to take some profits.

And finally, for long-term bitcoin investors, I would wait and buy bitcoin at $42K when the chance presents itself again.

Jeff, the Fed is likely to pick up on your analysis of junk bonds, as well. The stock market can’t be allowed to fall – you can bet that there will be repeats of printed money being directed to corporate bonds again – as was done previously via Blackrock. I believe that this may even be occurring quietly.

Interest rates can’t be allowed to rise – yield curve control is being done with treasuries – you can bet that the Fed will protect its herd of zombie corporations as well.

We’re in the era of complete government control of the market, and any corrections will be met with force. Investors know the Fed has their backs on all fronts, and there’s no more recessions and no more long-term market corrections.