Last week, Fed Chairman Jerome Powell was blunt about getting inflation under control.

Specifically, he said “I wish there were a painless way to do that. There isn’t.”

The pain speaks to rising interest rates and their bludgeoning impact on the economy. It’s clear from the Fed’s own regional surveys of business conditions that the economy is struggling.

The most recent example comes from a Fed report on manufacturing output that covers several southern states.

Their activity index slipped to -17.2 in September from -12.9 in the prior month, with a negative value signaling contracting economic activity.

That echoes the message from four other Fed districts, which all show negative readings as well. Those developments signal the start of the next phase in this bear market.

The Next Shoe is Dropping

The S&P 500 is down 23% on the year. But so far, that entire decline has been driven by falling valuation ratios, like the price-to-earnings (P/E) multiple.

Just take a look at the chart below from JPMorgan… 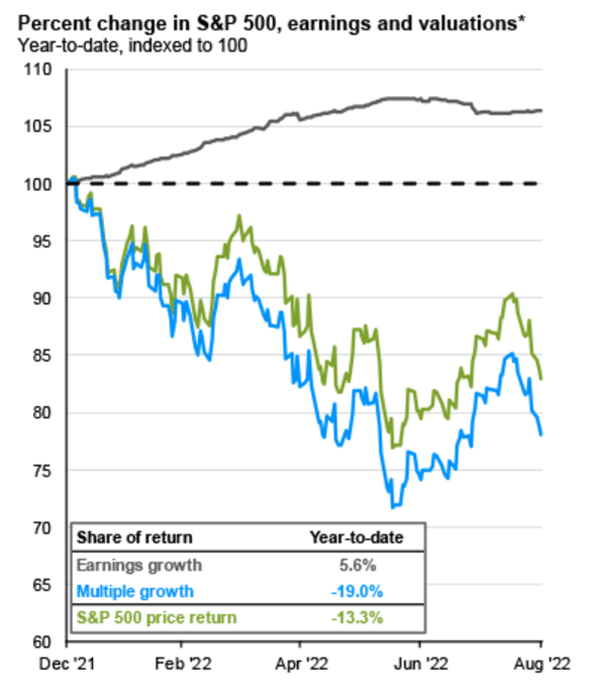 All the decline in the S&P 500 (green line) has been driven by a falling P/E ratio – the blue line labeled as “multiple growth” on the chart.

Something else stands out in the chart, and it’s that earnings (grey line) have increased to this point which has partially offset the S&P’s decline. Meaning, the plunge in stocks would be worse had earnings not increased.

But that’s exactly where the next “pain point” comes into play. Rather than contribute to the stock market’s return, earnings are about to become another drag on share prices.

That’s because we’re on the brink of an earnings recession.

The Fed’s aggressive rate hikes are having a negative impact on the economy as evidenced by those regional Fed surveys I mentioned earlier.

You should also be concerned about the earnings outlook because of the Conference Board’s Leading Economic Index (LEI) that’s used to forecast future economic activity.

The year-over-year (YoY) growth rate (blue line) fell into negative territory, which is another bad sign for corporate earnings looking ahead… And the stock market.

That’s because the S&P 500 has historically realized its worst returns when the LEI is in this regime.

In fact, when the LEI growth rate is below zero and falling, annualized returns for the S&P 500 are -11.2%.

Just in the last six weeks, stocks have dropped 14%, but the latest drop came on the heels of a 17% rally.

That’s why options have become one of my preferred trading vehicles in bear markets.

Not only do options allow me to clearly define my downside risk (because I can’t lose more than the premium paid), but put options give me the opportunity to profit from the downside.

So tune in next week, when I’ll show you how I find the best plays to profit from falling stock prices.

How will you hedge your portfolio against the volatility ahead?