That’s more money than the entire annual GDP of the U.K., France, and Italy.

Almost nobody was safe.

But since then, the tech sector has been able to stage a small comeback because it’s very sensitive to interest rate fluctuations.

And with inflationary data slightly softening, the market has gotten bullish on tech once more…

The hope is that the Fed will look at this data and consider softening their current rate-hiking stance.

As a result, the SPDR Technology ETF (XLK) has rallied 20% off its October 13 lows.

But is this just a relief rally in an ongoing bear market? Or is it possible this rally has some real legs underneath it? 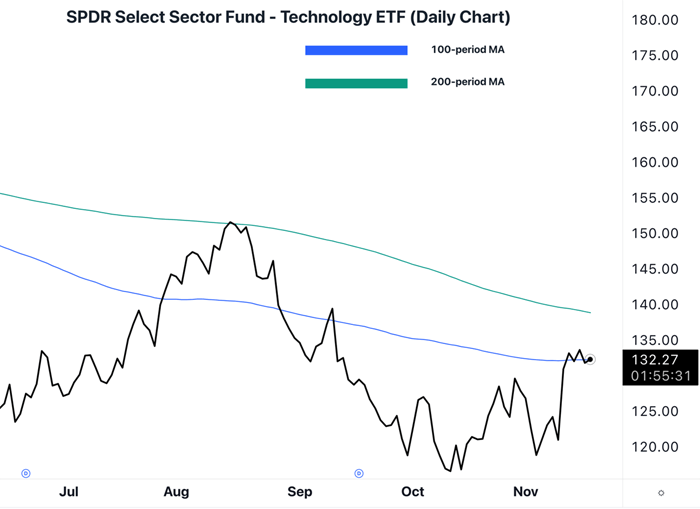 The key features of this chart are the two moving averages (MA).

The 100- and 200-period MAs (blue and green lines) are long-term… And they usually do a great job of showing us the underlying trend.

Here’s an easy way to use these two MAs…

As you can see, XLK has been trading below both moving averages for a while.

But now, prices have poked above the 100-period MA while remaining below the 200-period MA.

When we’re between moving averages like this, the market can enter a state of neutrality.

The question is whether this interest is enough to carry XLK above both moving averages.

Such an event would result in a potential reversal of the downtrend that’s been in place for most of this year.

If XLK can’t break above the 200-period MA, then we’re likely headed lower. This is what happened with XLK back in early August.

The market was able to break above the 100-period MA but stalled out against the 200-period MA. And this led to XLK breaking down to new lows at the end of September.

For traders, a market is at its most dangerous when it’s in a state of neutrality because prices could break either way.

I prefer to scale out of any existing positions as a market moves toward these areas.

Then, I’ll wait and see which way the market will break… It can’t stay neutral forever.

Once the next directional move is clear, I’ll hop back onboard.

That’s the key to good trading… keep it as simple and stress free as possible.

What do you think is the next move for the tech sector?