Ever since the S&P 500 hit my 2525 upside target earlier this week, I’ve been looking for a chance to short the market.

The index closed at 2538 yesterday. But I’m still not short – not yet. The conditions just aren’t right for setting up a low-risk bet against the stock market.

Most of the daily technical indicators, for example, haven’t yet reached “extremely overbought” territory. Look at this chart of the McClellan Oscillators for the New York Stock Exchange…

The NYMO helps to measure overbought and oversold conditions. Before adding short exposure on the broad stock market, I’d like to see the NYMO reach overbought conditions by closing above its upper Bollinger Band (the solid, squiggly blue lines on the chart). It would be an even better setup if the NYMO could climb above 60 and enter “extremely overbought” territory.

The NYMO closed yesterday at 21.28. So there’s still plenty of room for it to work higher before being overbought.

Many other daily technical indicators are in a similar condition. But we also don’t have any significant negative divergence that usually occurs before the market reverses. Look at this chart of the S&P 500… 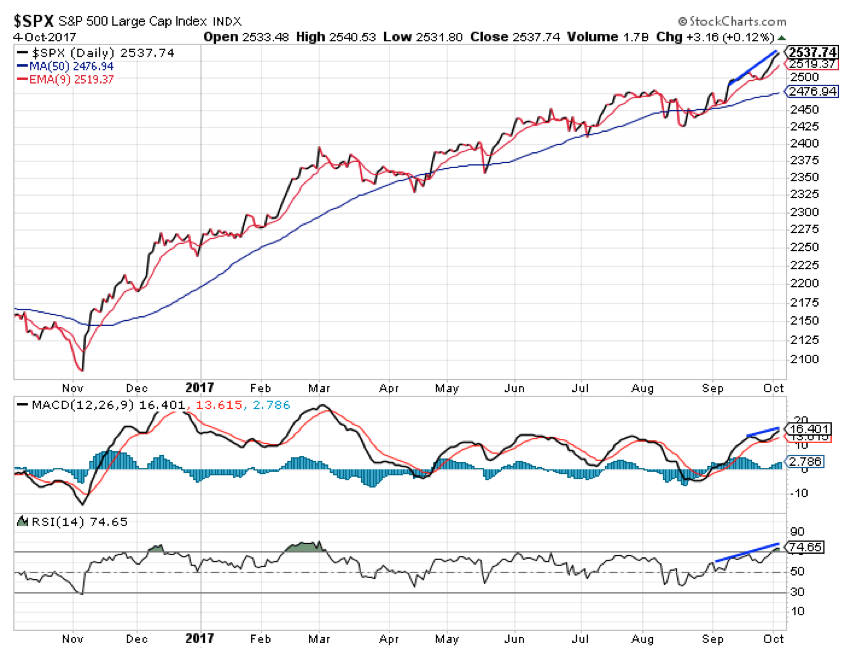 The indicators are overbought, for sure. The MACD and RSI are both at the second-highest levels of the year. So, this probably isn’t a time to be aggressively adding new positions on the long side of the market.

But without any sort of negative divergence, and without overbought conditions on the daily indicators, there just isn’t a good argument for a short position right here.

Yes, the market is overbought and we could certainly get a quick move lower at any moment. But for the past couple of months, the 9-day exponential moving average (the squiggly red line on the S&P 500 chart) has provided support for the market. Every decline over the past two months has stopped at the 9-day EMA. It’s likely to hold as support on any quick decline from here.

That’s not enough of a potential profit for me to justify taking a short trade. So, I’m on the sidelines for now and just waiting for a better setup.

P.S. What would it take for you to add short positions in this market? Do you know of any other signs showing the market will take a turn?

Send me your thoughts, along with any other questions or suggestions, right here.

For today, a real mixed bag of comment topics – ranging from the action in the bond market, to technical analysis for oil, to the right conditions for going short…

[TLT] is one trade I am steering clear of. The Fed doesn't have a clue what is going on and may change their mind in a flash. I am following HYG more closely because there may be some serious issues that the Fed can't solve.

Believe you are correct. Are you watching oil? Looks like it is forming the right shoulder of the Head and Shoulders pattern and could go down to 20s if the pattern plays out.

Terribly frustrating. [The] market is quite extended on almost all metrics. But with earnings starting next week it feels like the market players will keep the air in the balloon for some time to come. Also know that with small halts in price action, momentum, and timing, very limited change of direction can happen at any time. It feels very minimal if and when it happens.

Cannot see 15-20 handles down with inflation picking up a bit, EARNINGS starting, somewhat accommodating international Central Banks, emerging markets “flying”, potential tax incentives for companies and cuts for individuals, Fear of Missing Out (FOMO) very much alive – the list goes on and on. Feels like everyone who has underperformed is looking for the “next blip to buy the dip” You like that one?

Way too many are singing the October correction song. The technicals are stretched almost to the max yet they can be elongated for more time and money than we can stay solvent fighting the tape, which I have not done to any degree. Couple of shorts (puts) in individual stocks have gone well recently. Plus your work has been terrific for a while now.

Appreciate that you have NOT succumbed to any pressure from subscribers to force any trades that are not quite right.

Not shorting. But likely buying inverse ETFs on SPX and NASDAQ. Waiting to see whites of the eyes of the enemy before I do. Once selling starts it won’t stop because it can’t stop because of algorithms and ETFs being passive and no countertrades. A massive destructive avalanche is coming. I’m watching the International Monetary Fund (IMF). D-Day is October 15 when BRICs can get to 15% and veto us. And then the dollar is doomed.

I'm seriously considering a subscription to your Delta Report. I have read all of your material that you have so honorably made available. I genuinely appreciate that you have made a concerted effort to inform your potential clients of the nuances involving the use of options and I'm well aware that I have the choice to act on each of your recommendations or disregard them.