Some were calling for new highs.

After all, the market was only 6% off that mark and just recovered the entire drawdown from the Russian invasion. It even rallied from the Fed’s first rate hike.

Momentum was on the market’s side.

But for the market to rally to new highs, valuations would also need to hit new highs.

This was impossible, given that it would place multiples right back to “dot-com” bubble levels…

Last week, the index overshot that target to trade down to under 3900 before finally recovering and stabilizing at 4000.

That’s despite the many troubling developments in the market such as the fallout in cryptocurrencies, China’s evolving economic disaster, and a capitulation due to margin selling.

But it seems that valuations have become attractive enough to ensure that the May 12 low of 3859 will hold… at least until we’ll get fresh guidance from companies reporting earnings in July.

On top of that, technical indicators like the Volatility Index (VIX) have been giving off signals that the market is deeply oversold.

For instance, take a look at this chart of the S&P 500 and the VIX… 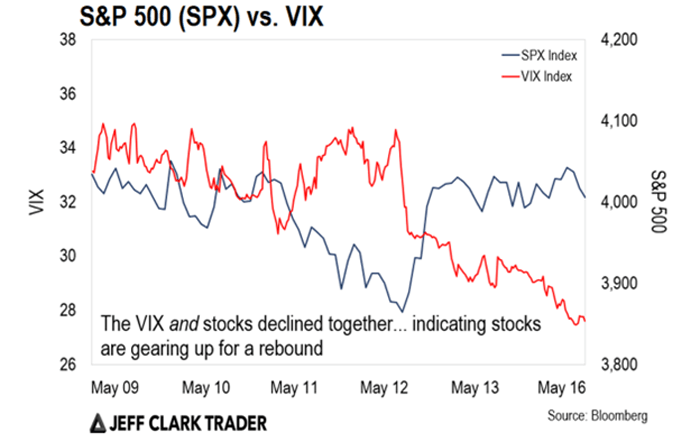 The VIX started heading lower on May 9…

Yet, stocks continued to drop for another three days before finally bouncing.

When stocks fall, volatility rises. But in this case, stocks and volatility were falling in unison.

You can’t have it both ways for any material stretch of time.

This tends to happen when momentum feeds on itself and capitulates – with margin selling toward the end of the move, as we’re seeing now.

My favorite example of divergence between volatility and stock prices occurred in January 2018… where the reverse happened.

Stocks kept rising with tiny intraday ranges, and the VIX started rising as well toward the end of the month.

This was a prelude to what has become known as “Volmageddon” – when the market crashed 10% in 9 days.

We’re not going to see a complete mirror image of those events now, just a small relief bounce.

But for traders, a smooth 2-3% move can generate big profits. 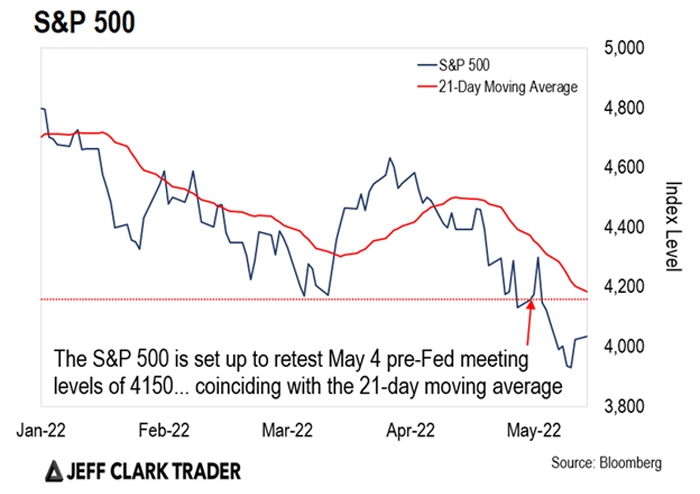 This would also coincide with testing the 21-day moving average (MA) – a short-term technical indicator that gets touched more than once a month on average.

And since the S&P 500 has been trading lower lately, that average over the last 21 days will come down as prices rise – and will likely meet right around 4150.

Although the setup is in place for a rally, the fear of an outright recession guarantees the market will stall there…

The Fed will either engineer a soft landing, the economy re-gains (at least) part of its growth rate, and analysts start upgrading earnings projections.

Or a recession will be imminent.

That’ll take at least a couple of months to resolve. There won’t be enough information until then.

So until then, investors should keep a neutral stance toward the market, and be nimble enough to play a 10% wide range.

Are you hoping for a rally or preparing for another recession?