My wife and I went down to the gun range for Father’s Day.

While we were there, I saw something I’d never seen before…

One of the other shooters on the range was firing polymer cartridges.

Polymer cartridges are an economic alternative to the high price of copper, which is traditionally used in bullet casings. Polymer may not be cheap for long, however…

If there’s one thing that rings true in the commodities market, it’s the old adage that “the cure for high prices is high prices.” Every big bull market in commodities causes significant demand for alternatives.

The higher the price of a vital commodity goes, the greater the demand for an alternative solution.

Eventually, higher prices encourage new supply of the original commodity into the market… and the price comes back down. It’s quite rare for prices to fall all the way back down because production costs tend to rise over time.

That’s why commodity markets tend to be cyclical. They go through big bull runs, which are followed by big bear market crashes.

During the last big oil bull market, from 2003 to the peak in 2011, the wind and solar sectors did well because they prospered in a higher energy price environment. The high price of industrial resources like copper is doing the same thing for polymers today.

How Commodities Bull Markets are Formed

To better understand how a bull market in commodities is formed, first let’s take a look at crude oil…

Crude oil is a key ingredient in the production of plastics.

Currently, OPEC+ has 8 million barrels of crude oil that they’re holding off the market. That’s helping to support prices.

However, it’s also hanging over the market as a threat – when OPEC+ decides to pump more, it’ll flood the market with oil and prices will come back down.

Commodity bear markets end when the excess supply from the last bull market is worked off and a new demand story emerges.

Crude oil prices ranged for decades until the late 1990s. The entry of China into the World Trade Organization (WTO) was a major event that led to demand for oil multiplying.

For oil prices to surge to new all-time highs again, a new source of demand will need to appear.

Today, oil used in transportation, fertilizer, and plastics production. But, the transportation use case is under constant threat because of the growing demand for electric vehicles.

So, it makes sense to me that the composites sector will be the next source of demand.

Think about it this way, many luxury cars are already built from polymer and composite materials. The future may threaten demand for oil as a transportation fuel, but it’ll boost demand for it as a construction material.

Concrete foundations, wood in houses, and steel vehicle bodies could all be displaced by the use of cheap, hard, moldable, and reliable composites. At present, the roll out of composites in these sectors is hampered by consumer reluctance to change and the relative cost.

But, that only applies when people can actually afford conventional materials.

As we recently saw with lumber prices, the surge in prices killed off demand. Construction companies stopped building until prices started to come down. It’s very unlikely that lumber prices will come back down to the levels seen before the pandemic. We’re now in a new pricing structure.

The same is true of all the major commodities. There’s simply not enough supply and plenty of demand.

That means consumers will have to consider alternatives…

Remember when the first LEDs came out? Very few people wanted to change from incandescent light bulbs because they didn’t like the way the new lights looked. We’re at that stage with polymers and composites today.

Until now, the market penetration of polymers and composites has been in niche areas of the economy like guns, auto bodies, gears, and aviation interiors. The unfolding commodity bull market will bring them into the mainstream.

The Vanguard Materials ETF (VAW) is loaded with composites companies rather than miners. The ETF pulled back very sharply last week. 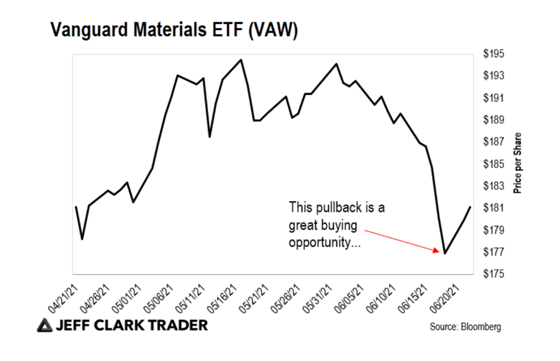 VAW is experiencing some selling pressure because of concerns that the Federal Reserve will tighten policy too quickly. I don’t see that as a credible risk.

I believe this pullback is a buying opportunity for anyone interested in supporting alternatives to rising commodity prices – like polymers.

P.S. Last Friday, there was a lot to share in my Eoin’s Insights segment of the Market Minute – where I give my thoughts on what’s happening in the market.

I dove into topics like the Fed meeting last Wednesday, the future of the dollar, and the recent dip in gold. If you missed it last week, you can watch it right here.

And, I’ll be back again on Friday with another video on what’s been going on this week as well.