I was recently speaking with a good friend who owns a garment factory in Los Angeles.

He employs about a hundred people and supplies independent stores all over the country.

To keep that business running he needs thread. The cost of shipping a container from China has risen to $20,000… and that’s before he factors in the increase in the cost of the goods.

It’s the same story for almost every business owner I know. Especially since this is the time of year when everyone gets their inventory ready for the holiday season.

But, everything is running late. There are lines of boats outside harbors in both China and the U.S., and it’s taking weeks to clear the backlog.

In 2020 there were concerns with the global supply chain, but at the time China was open and most factories were operating.

Today, half of China is locked down and factories are having difficulty sourcing workers. That’s leading to delays in manufacturing.

When we add those factors to the continued shortage of semiconductors, there’s going to be a major squeeze this holiday season – causing a rise in prices. So, the best advice I can give you is to start your holiday shopping early. If you leave it until December, you are going to have a major headache.

More importantly, how can you make some money to cover rising prices?

The simple answer is to buy the stocks of businesses who are benefiting from this trend of rising prices.

When consumers figure out what’s going on, they will have a couple of choices… They can either give up on making a purchase, or they’ll rush to buy before prices rise even further. Many will simply just take on debt to fund purchases during the holidays.

As for taking on debt, there’s been an explosion in buy-now-pay-later businesses. They are providing credit to young people at an earlier age than normal, as these companies are typically less restrictive to potential borrowers. That’s obviously risky… However, since we are in a very low interest rate environment, the business model is prospering.

The companies involved hope that by offering credit to people when they are young, they can hold onto them when they have more established income streams. They dream of competing with titans like Visa and Mastercard in the payments sector.

For instance, Affirm Holdings (AFRM) popped on the upside last week. Sezzle (SZL) is still trading around its IPO price. Afterpay (AFTPY) is trending higher. And larger companies like Square (SQ) and PayPal (PYPL) have been ranging for most of the year.

Now’s the time to start getting interested in these kinds of companies. If prices rise, taking on additional debt is going to be the first step for most people.

That’s particularly true of young people who don’t have experience with credit. So, fintech companies are likely to be big beneficiaries of that trend. 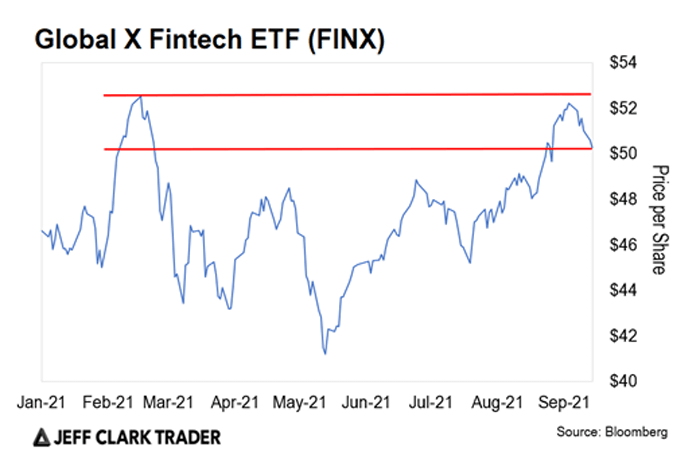 FINX is trading in the upper side of its seven-month range. It looks like a solid candidate for a breakout, as investors begin to look for companies that’ll prosper during a highly inflationary holiday season.

In my mind, it’s a double play – FINX leverages the fintech sector’s innovation and the consumer response to rising prices.

P.S. Last Friday, I hosted another one of my weekly insights… I went over some international markets, tapering, and gold.

If you missed it, you can click right here to get caught up. And tune in on Friday for another installment.

In today’s mailbag, Jon shares his thoughts on Eric’s recent question on whether people should be trading in their dollars for bitcoin…

Compared to bitcoin, gold is a much cheaper inflation hedge. That’s true, even if you believe bitcoin is going to be the best inflation hedge for the next 5,000 years.