Here’s what to look for in the action today…

The stock market tends to do well during the final days of April and the early days of May. Yesterday’s big 25 point rally in the S&P 500 kicked off the bullish season.

If you’re new to the Market Minute, here I share my thoughts on how the major markets are setting up for the day… and help you prepare. It’s how I’m going to trade my own money.

First, let’s see whether the S&P rally has staying power…

The S&P 500 has broken out to the upside of the downward channel pattern on the daily chart. Take a look… 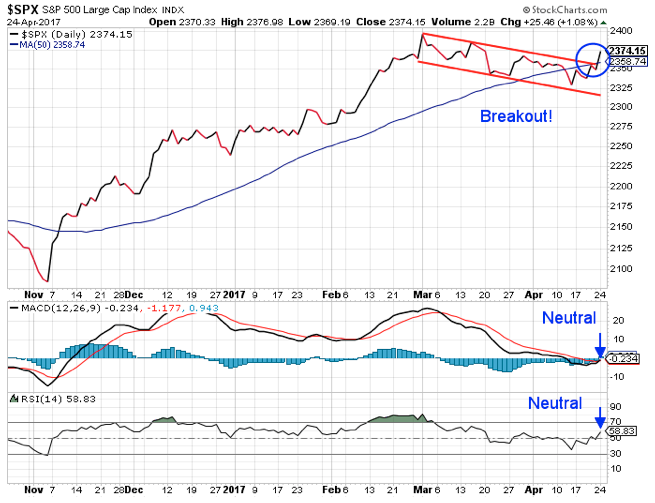 The index is well above the red resistance line at the top of the downward channel pattern. It’s also above the blue 50-day moving average (MA) line. Both of those lines will now serve as support on any pullback.

The MACD (moving average divergence convergence) momentum indicator, and the Relative Strength Index (RSI) – two technical indicators that help measure overbought and oversold conditions – are in neutral territory. They’re nowhere near being overbought, like they were back in early March when the S&P peaked at about the 2400 level.

There is plenty of room for these indicators to work higher. That should help stocks to rally over the next couple of weeks. My minimum upside target for this move is 2385. But in a strong market the S&P could rally as high as 2435.

For today, though, we’re likely to see a pullback.

Take a look at this 15-minute chart… 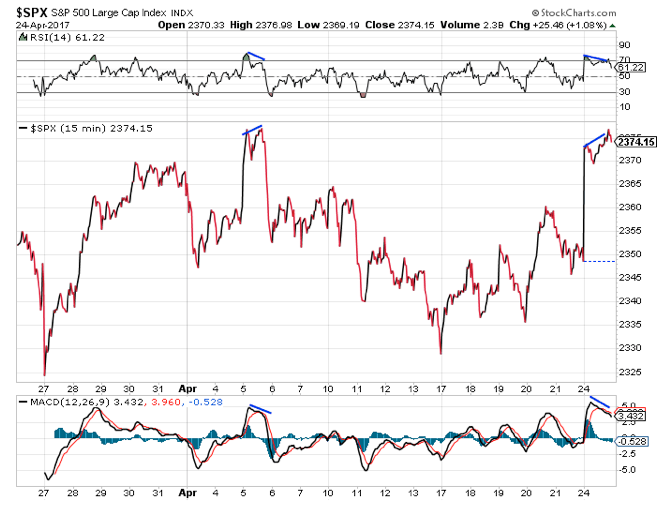 Notice how similar yesterday’s rally looks to the action on April 5. Back then, the S&P exploded higher, pulled back just enough intraday to create a “bull flag” pattern on the chart, and then rallied higher at the end of the day. But that second push higher created negative divergence on both the MACD and RSI indicators (negative divergence is occurs when the index rallies to a higher high, but the technical indicators make a lower high).

Patterns on a 15-minute chart tend to play out within one day. So if this negative divergence is going to influence the market action, then the market should give back some of yesterday’s gains today.

As long as the pullback isn’t too severe, any decline today should be followed by more strength later this week.

The ideal setup would be for the S&P to trade back down toward the 50-day MA line on the daily chart. That’s at about 2360. That would allow the negative divergence on the 15-minute chart to play out, while not doing any technical damage to the daily pattern.

Traders should be looking to buy stocks into that sort of a pullback.

Gold held up surprisingly well yesterday. It traded more than $20 lower at one point. But it closed down only $11, and near the high of the day.

I don’t think we’ve seen the end of this decline in gold, though. Gold stocks are still underperforming the metal. And until that situation changes, we have to expect more downside.

The ideal setup here would be for the gold sector – as represented by the VanEck Gold Miners Fund (GDX) – to open lower and then reverse and turn positive on the day. That would increase the odds the gold stocks have reached at least a short-term bottom

I’ll update regular readers on these trends throughout the day on Jeff Clark Direct.

P.S. I love to hear your feedback. Send your comments and questions to me right here.