I've been arguing for the past couple of weeks that the stock market is changing character. The S&P 500 has now closed below its 9-day exponential moving average line for two days in a row. That's often the first sign of impending weakness – as the short-term momentum shifts from bullish to bearish.

These are all “caution” signs, which suggests we're likely headed for an intermediate-term period of weakness for the stock market.

So, for today, I'd like to shift our focus to how to profit on the downside of the market.

Here's a question I recently received which deals with the issue…

My question regards speculating on an eventual downturn of the market and a significant crash. Do you ever use long-term puts on companies with very poor fundamentals (I know you do mostly technical analysis)?

In my experience… there's no such thing as a long-term short trade.

Yes, companies with poor fundamentals can and do go to zero. But the path to zero is not a straight line. Once a stock drops deep into oversold levels, and the proverbial rubber band is stretched just about as much as possible, a short trade is then vulnerable to an oversold bounce.

And that bounce can wipe out a lot of the hard-earned profits on a short trade. All too often I've seen good traders try to hold short positions through that sort of a bounce, in anticipation of even larger profits on the next decline. They end up stopping out of the trade at a much smaller profit, or even worse… they watch their profit turn into a loss.

I prefer to consistently take profits on short trades once a stock has fallen to extremely oversold levels (like historically far below its 50-day moving average, or stretched far below its lower Bollinger Band). Then I'll look to re-establish a similar short position once the stock bounces back towards a logical resistance level (like the 50-day MA) and the oversold conditions have been relieved.

Consider, for example, the recent saga of short sellers in the rental car company sector.

Hertz (HTZ) and Avis (CAR) are great examples of companies with poor fundamentals. As such, they've been a big target of short sellers over the past year or so. And those trades would have been hugely profitable so far this year.

For example, you could have shorted CAR at more than $40 per share back in January. It's trading for about $27 today. And it's probably headed even lower over time.

But as you can see from the following chart, traders could have closed their short positions for even larger profits a few weeks ago, and then used the recent strength to re-enter a similar position. Take a look… 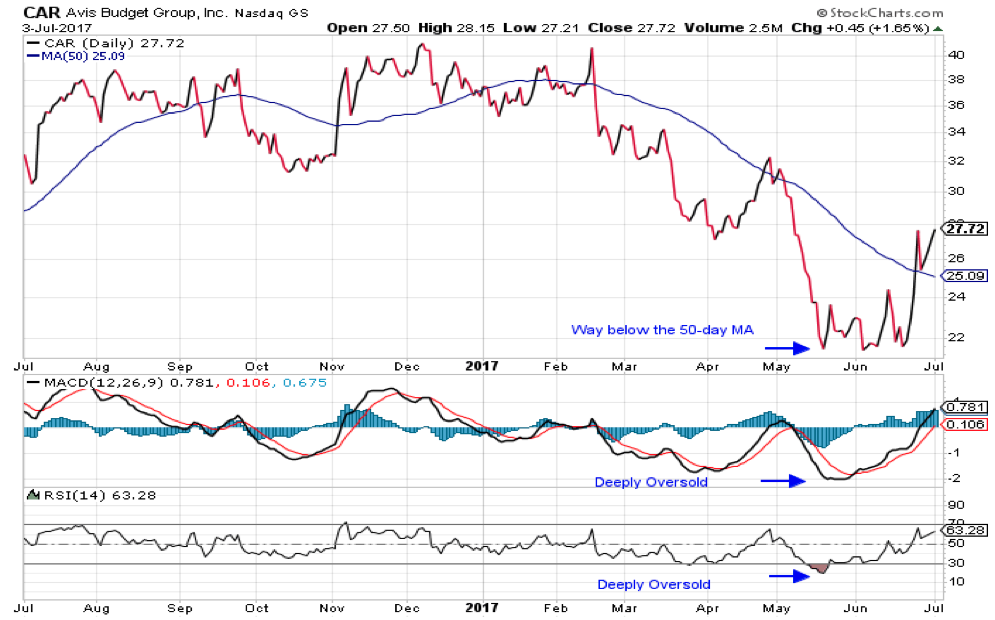 In mid-May, CAR collapsed. The price declined well below its 50-day MA line. And momentum indicators like the MACD and the Relative Strength Index (RSI) dipped into extremely oversold territory.

That would have been a good spot at which to take profits on a short sale. The stock was oversold. It was historically far away from its 50-day MA. And it was vulnerable to an oversold bounce.

Over the past few weeks, CAR has rallied more than 30%. Traders who stayed short the whole time have given back a good chunk of their gains.

On the other hand, traders who took profits on their short positions when the stock reached extremely oversold levels can now look to re-short CAR and attempt to profit on the next decline.

P.S. For the next week, I’ll be answering some of the most frequently asked questions from my inbox. So if you have any questions on what we talk about here in the Market Minute, send them right here.