This recent New York Times headline caught my attention – “As Lumber Prices Fall, the Threat of Inflation Loses Its Bite.”

It appears the market thinks a small $98 billion industry like lumber is suddenly a bellwether for global inflation.

It’s so small that none of the widely followed commodity indices even track it.

And here’s some more misinformation from Forbes that’s been floating around:

“The price of lumber has fallen more than 40% since its peak in May and other commodities have followed suit, suggesting that some of the price surges that have alarmed lawmakers and investors this spring may fade with time…”

There are two issues with this: other commodities have not followed suit, and commodity prices aren’t the only factors driving inflation.

In fact, it’s quite the opposite – the commodities that have been rising are actually the ones that matter most.

For instance, since May, oil has gone up 16% and natural gas is up 25%. These are the commodities that have the most direct link to rising costs.

So, it seems that lumber’s massive run up this year, and it’s subsequent crash, is making people feel that other commodities will suffer a similar fate – along with looming inflation expectations.

In April, my colleague Eoin Treacy said it best in his Market Minute essay. He said that the lumber run up was a short-term trend, and longer-term trends will be much harder to break.

He was dead on – lumber crashed and other commodities that have a significantly higher influence on inflation haven’t.

Out of the Fed’s Control

These types of headlines don’t just mirror the thought process of the market, but the Fed as well.

The Fed calls inflation “transitory,” meaning it’ll correct itself just like lumber prices did. And as Jay Powell has repeatedly told us… they have the tools to deal with “unwanted” inflation.

To me, this approach ignores the data that’s directly in front of them – namely that consumer demand has already been outpacing pre-pandemic levels in combination with tight commodity supplies.

It also points to the false idea that the Fed can fix everything that’s wrong with the economy from its ivory tower in Washington.

But, the run up in crude oil and natural gas prices over the last two months are just two examples of why they can’t.

The Organization of the Petroleum Exporting Countries (OPEC) made that clear over the weekend when they were unwilling to add more supply to a very tight oil market.

In the case of natural gas, this year’s heat wave created a demand shock that sent prices soaring.

Last time I checked, the Fed has no control over the oil cartel or even the weather.

I know people like to criticize the Fed… so I want to point out that they’ve done a lot of good too. They navigated tough times like the 2008 Credit Crisis, and the infrastructure they built from that crash got us out of the pandemic.

A lot of innocent people could have been ruined, but weren’t.

But right now, they’re more worried about the short-term repercussions of tackling inflation head on.

Because to do so, they’ll need to pull some of that “easy money” away from the market, which would cause stocks to drop – and they don’t want to kill this golden goose just yet.

But there are other factors affecting inflation – not just commodities. And unless they face this reality, inflation will eventually be completely out of their control.

The fact is that rising demand has now mixed with Fed stimulus like never before. Easy money is chasing a limited pool of financial assets. And the shortage of workers is forcing wages higher. This combination will make pre-pandemic price levels for everyday goods and services ancient history.

Just take a look at the chart below… 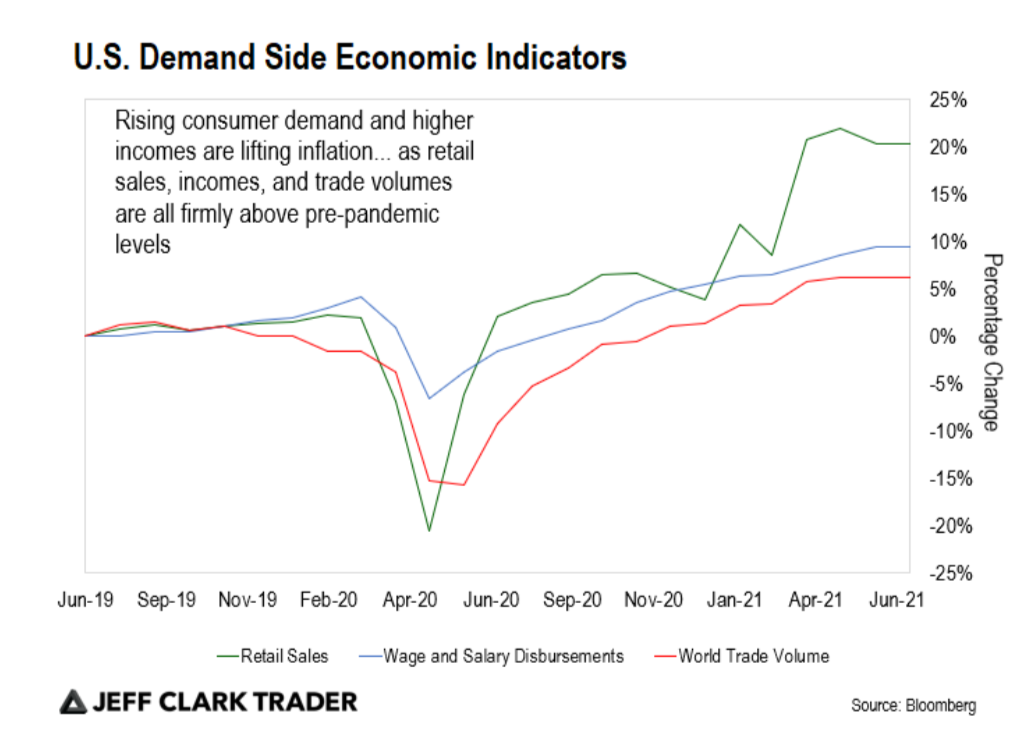 It’s not just commodities affecting inflation. World trade volumes, personal incomes, and retail sales are all way above pre-pandemic levels. Shipping rates are completely off the charts, rising almost 400% since last year. That means that all those plastic trinkets the U.S. consumer loves to import from overseas will continue to rise in cost too.

And those higher incomes mean that companies are paying their workers more. Which, in the end, almost always trickles down to the consumer.

The markets are continuing their march forward.

All-time highs are being made daily. Complacency tends to feel good, and the headlines are scrambling for ways to justify it.

But over the past two weeks, the Volatility Index (VIX) has been making a material
divergence from stock prices.

Normally, as stocks rise the VIX falls, but we haven’t been seeing that lately. Both have been rising, and that’s a reliable sign that the market is due for at least a pullback soon. There are countless examples of this, but in the end, the VIX is always right.

Taking money off the table and parking it into products like the iShares TIPS Bond ETF (TIP) or defensive sectors like the Utilities Select Sector SPDR Fund (XLU) is a good idea at these levels. TIPS are rare types of fixed income products that rise during inflationary periods, and utilities outperform other sectors when markets correct.

But the long-term picture will be much bleaker unless the Fed faces the very real threat of inflation head on and stops worrying about the short-term consequences.

The last real inflationary period in the U.S. had the market losing 11% from 1969-1979. That era too had a Fed that thought they had everything under control. But then the supply shock from the oil embargo in 1973 sent the market down 50% over a 20 month stretch… something that no one saw coming.

The bottom line is inflationary periods aren’t good for stock prices – and the Fed shouldn’t trade short-term gains for long-term losses. Because all it takes is one random event that no one saw coming to get inflation to a point of no return.

P.S. If you’re interested in what else my colleague Eoin Treacy has to say about what’s going on in the markets, you can tune in every Friday for his video segment – Eoin’s Insights.

Last week, he talked about activity in bitcoin, inflationary pressures, and the next move for copper. If you missed it or want to learn more about it… just click here to watch.

What are your thoughts on how the Fed is handling the lingering economic effects of the shutdown, and the possibility of an inflation spike happening?