Despite being on the verge of breaking down, high-yield bonds somehow managed to rally last week.

And, since the action in the junk bond market tends to lead the stock market, the recovery in junk led to some solid, “risk-on” buying in stocks.

Of course, it was touch-and-go for a while. The S&P 500 actually dipped below the support of its 50-day moving average (MA) at around 3870 on Thursday. And, it looked like stocks were about to cascade lower.

But, as we’ve seen time and again over the past several months, buyers showed up at just the right time. And, the stock market finished the week within spitting distance of a new all-time high.

Just like with every good conspiracy theory, though, there’s always more than one shooter. So, while the bulls dodged the junk bond bullet last week…There’s another shot headed their way.

Look at what’s going on in emerging markets… 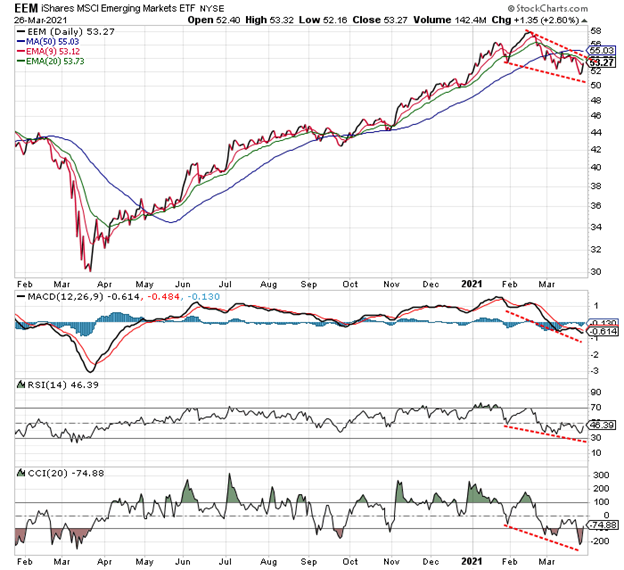 The iShares MSCI Emerging Markets ETF (EEM) peaked in mid-February. It has been in a confirmed downtrend – making a series of lower highs and lower lows – since then. The various moving averages have flipped from a bullish to a bearish formation – with the 9-day exponential moving average (EMA – red line) below the green 20-day EMA, and the 20-day EMA below the blue 50-day MA. Those moving averages will now offer resistance on any rally attempts.

And, none of the technical indicators at the bottom of the chart are showing any signs of positive divergence, yet. In other words, as EEM has been falling, the indicators have been falling right along with it. This usually means that the trend – in this case it’s a downtrend – is strong and likely to continue.

This is worth noting because, just like high-yield bonds, emerging markets are “risk-on” assets. The action in EEM tends to lead the action in the S&P 500.

Of course, skeptics will say, “C’mon, Jeff. You’re just looking for a reason to support your bearish stance on the market.”

And, that may be true…

But, it’s worth pointing out that EEM peaked in February 2000 – about six weeks before the dot.com bubble burst. It also peaked in October 2007 – just before the Great Financial Crisis kicked into gear.

My point is… Don’t get too complacent here. Just because junk bonds rallied, and don’t appear to be that much of a threat to stocks anymore, doesn’t mean traders should rush out and buy everything in the stock market.

There’s another threat waiting in the wings.

What do you think about the current movement in the markets? Do you think there’s a trend happening based on previous historic events?