Last week, investors let out a big sigh of relief…

The increase in October’s consumer price index (CPI) was less than expected – even though it rose 7.7% compared to last year’s levels.

That fueled hopes that the Federal Reserve would ease its aggressive rate-hiking campaign and end this bear market.

The report sent stocks soaring with one-day, record-breaking gains the day it was released.

The S&P 500’s 5.5% jump was the strongest in more than two years. Apple alone added nearly $191 billion in market value in a single day (the most ever by a company in the U.S.).

But despite the jubilation, one key feature was missing: signs of panic-buying by institutional investors.

That’s the confirmation signal needed to put this bear market in hibernation.

The absence of the smart money says a lot about the stock market’s biggest players. And their lack of confirmation means the most important buyers are still sitting on the sidelines.

Institutions are still the 800-pound gorilla when it comes to moving the stock market. That’s because they make up 82% of trading volume on U.S. exchanges.

And their confirmation signal – driven by panic-buying on a big rally day – has historically marked an end to even the most drawn out and severe bear markets.

So when they don’t show up on big rally days, you should be suspicious.

That’s why confirmation to kick off a new bull market is so important… showing the kind of hand-over-fist buying as institutional investors rush to get in.

And it’s why I believe stocks won’t find a bottom until the smart money decides it’s time.

You can confirm the arrival of the next bull market by tapping into gauges of buying pressure.

Below is a chart of that indicator in action, with a surge in buying pressure (circle) less than two weeks after the historic 2009 lows exiting the Global Financial Crisis… 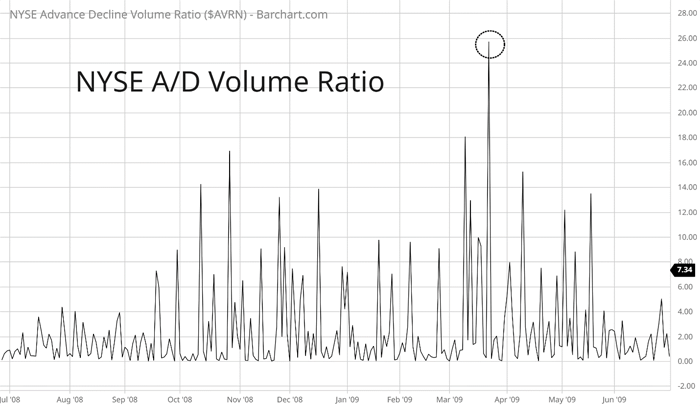 This ratio nearly hit 26, which clearly stands out from other readings in the period. 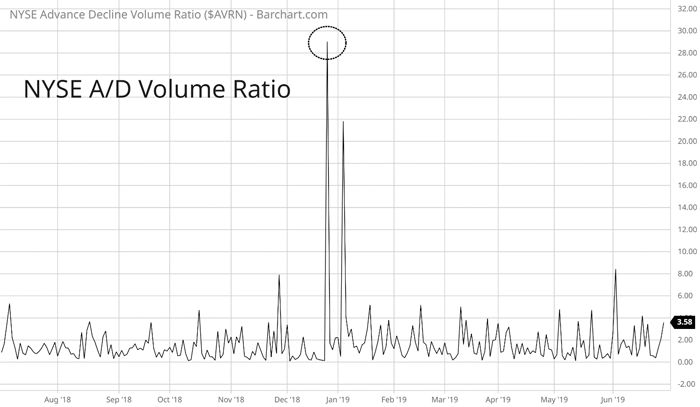 Last Thursday – when the S&P 500 gained 5.5% and the Nasdaq jumped 7% – this ratio of advancing-to-declining volume only hit 6.

That’s not a bad figure, but it’s certainly nowhere near the levels that have marked the end of past bear markets.

This shows the smart money is not yet convinced the worst is behind us.

But that shouldn’t stop you from taking advantage of the trading opportunities this market has to offer.

He calls these trades “Retirement Codes,” because you could potentially make 79 years of normal market gains in as little as two days.

For more details, click right here to watch Jeff’s briefing on his latest “Retirement Code” for this month.

Have you been sitting out on the sidelines during this market action, or have you been trying to catch profitable moves?