Typically regarded as a safe port to ride out a stock market storm, bond markets have been anything but safe in 2022.

And while rising rates (and falling bond prices) have decimated investor portfolios, there’s another corner of the fixed-income market that’s on shaky ground… and it’s one that could tip the next big move in stocks.

And that’s with the high-yield sector, also referred to as junk bonds…

Junk bonds are issued by companies with poor credit quality. That could mean a company already has a heavily indebted balance sheet or is struggling to generate enough profit to make interest payments.

Developments in the high-yield segment can also ignite moves in the stock market.

Today I’ll cover why the junk bond market is important, and why it matters to your portfolio…

The Signal in Spreads

Low-quality companies can access investor capital, but they have to pay up for it.

That means junk bond issuers pay a bigger interest rate to borrow compared to a high-quality issuer, like an established blue-chip company or the U.S. Treasury.

The difference in that interest rate is called a spread, and the spread can vary based on the perceived likelihood that investors will get their money back.

During times of strong economic growth, spreads tend to be low… meaning investors aren’t demanding extra compensation because the chance of being paid back is high.

But when the economic outlook starts deteriorating, investors demand a larger spread to compensate for the risk of defaulting.

And since a widening spread reflects concerns over the economy, they also make a great forecasting tool.

You can see that spreads started rising well before the last three recessions hit. And not only do rising spreads precede recession, but they also flag downside risk in stocks.

Those last three recessions also coincided with the last three major bear markets, and spreads were widening before the most severe stock market declines unfolded.

This Pattern is Key to the Next Move in Stocks

But as the Fed continues to hike rates at a historic pace to slow the economy and bring down inflation, concerns are emerging that financially vulnerable companies could face difficulty making payments.

That’s reflected in widening spreads this year, which have gone from 3.1% to 4.6%.

But over the last several months, spreads are setting up a chart pattern that could influence the next big move in stocks.

After widening from the start of 2022 through June, junk spreads are trading in a narrowing range. Take a look at the chart below… 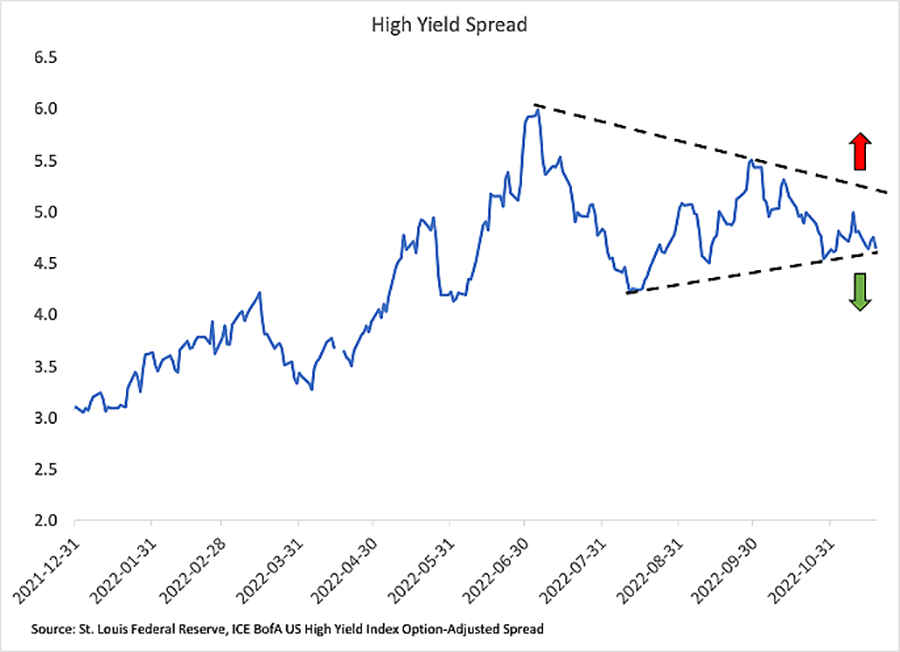 Here’s what you need to watch now…

If spreads break down and fall out of this pattern, that’s a sign bond investors are pricing in a soft landing for the economy… and that would be a big plus for the stock market.

But if spreads shoot higher out of this pattern, it means just the opposite.

That would be a sign that the outlook is darkening quickly, which I expect would weigh heavily on stocks like the last three bear markets (you can track this same spread for yourself here).

So instead of trying to guess the next turn in stocks, you can use signals from the bond market to tip the next move.

Recently, my colleague Jeff Clark also showed you how to use market signals to get ahead of the next big swing. To take advantage of these signals, he has a trading system that requires inputting just one “code” at a time into your brokerage.

It’s so easy, almost anyone can do it. Simply put in his next “code,” and you could watch your money double in just days…

To find out Jeff’s latest “code,” go right here. It could be the difference between staying ahead of this market… or losing your shirt.

In today’s mailbag, a couple of subscribers share their thoughts…

Hi Jeff, I just finished the eighth training video. They’re absolutely brilliant. They’re easy to follow. If need be, I can go over them as many times as I want.

Since I’ve been trading longer than you have, part-time of course, I don’t think I would need to go over the video more than once, twice maximum.

I just like to commend you for putting together a set of such videos. Well done and keep it up.

It’s been positive so far. I have only had three trades at this time. They were profitable 80% or above. I’m looking for this to improve.