If history is a guide, then traders should be relaxed during this final run into the New Year…

That’s because markets tend to rally around this time.

Since 2000, the average return for the S&P 500 during December has been .70%. In fact, the fourth quarter in general is the strongest of the year.

Some call it the “January effect.” It’s a theory that says markets tend to rise in January due to temporary price dislocations caused by things like “tax harvesting.” Another theory is that investors use their year-end bonuses to buy stocks around this time.

But none of it’s true…

You see, the average returns in January since 2000 are actually negative on average.

So, either this seasonality story has been priced into the market where traders simply front run it and actually buy in December… or it’s a case of “groupthink” around a prevailing narrative.

Today, I’m going to show you the only thing that actually matters in the market, not just for this week, but also for the upcoming year…

Inflation Has Crept Into Everyone’s Mind

It all boils down to whether the Fed’s monetary policy will remain loose or is set to tighten.

At a recent Senate hearing, Fed Chairman Jay Powell mentioned that we’re not only entering a tightening cycle, but that it’ll probably come faster than originally thought… and that inflation is no longer “transitory.”

It’s probably a good time to retire that word (transitory) and try to explain more clearly what we mean. At this point, the economy is very strong and inflationary pressures are higher, and it is therefore appropriate in my view to consider wrapping up the taper of our asset purchases… a few months sooner.

Tomorrow, at the Federal Open Market Committee (FOMC) meeting, we’ll know more about the extent of Jay Powell’s about-face on inflation and the Fed’s timing regarding raising interest rates.

I’m not sure what prompted Powell to change his stance on transitory inflation. It seems like everyone but him has been seeing the writing on the wall.

Maybe it’s the acknowledgement that inflation has behavioral elements to it… meaning that even if the supply chains get fixed, prices could still remain high.

That’s because now inflation has crept into everyone’s mind. Often, marketers refer to this as “anchoring” meaning the reference price for everyone is now higher, and there’s no need for companies to lower prices even if inflation gets “fixed.”

In behavioral economics it’s referred to as “arbitrary coherence.” It’s when arbitrary numbers influence the amount that buyers are willing to pay for a product.

But now since Powell has partially showed the markets his cards, we know that the pivot towards rate normalization is underway, which means the Fed is now thinking very hard about thinking about raising interest rates…

So, this Fed meeting will be one of many where they’ll assess the timing of a new tightening cycle, and it’s important to know how the markets have reacted to these developments in the past. 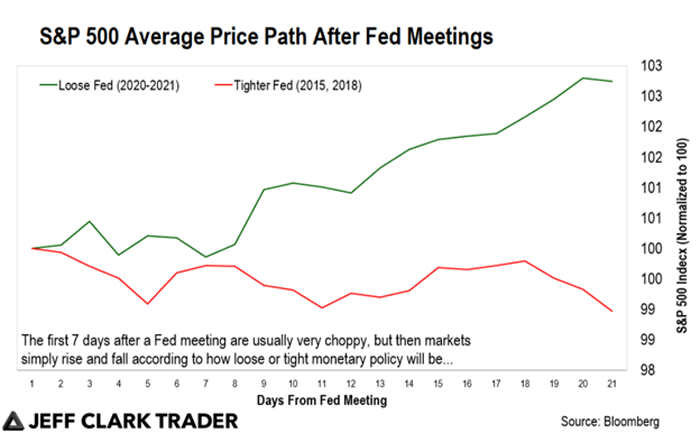 The last 10 meetings are a good proxy to capture how the market tends to react when the Fed is overly dovish (executing policy that handholds the market).

There’s a clear difference in what to expect in the market based on whether the Fed is getting tighter versus remaining loose.

So, despite the market seemingly running away from any kind of bearishness last Friday when it rallied 1% and 4.4% since the Omicron lows on December 1… yesterday, it fell and gave back all of Friday’s gains with no news headline to trigger a selloff in sight.

Then there’s Jeff Clark’s Volatility Index (VIX) “crystal ball” indicator where he shows how the market is lopsided again, but this time with a Fed that has been publicly pivoting towards tightening sooner rather than later.

My plan is to see how that 4660 level we showed you in a recent essay holds up in the coming days. Right now, the market is testing and re-testing this level at an increasing rate… which makes it even more important.

Also, it makes this Fed meeting critical – because I suspect the way the market plays off this level will be decisive.

Every trader and investor should tune in to the FOMC meeting tomorrow at 2 p.m. because if history is a guide, it’ll set the course for the rest of this year and at least into 2022 as well.

Will you be tuning into the FOMC meeting tomorrow? Do you think there’ll be a significant difference in the markets afterwards?