There is no such thing as a stealth bear attack.

Grizzlies are not sneaky animals.

In the wild, bear attacks happen because people either missed the warning signs, or they ignored them. And, folks didn’t know what to do once the attack began.

The same is true for bear attacks in the stock market.

If you were paying attention back in 2000 and 2007, then you could have avoided the mauling that most folks suffered in the ensuing bear markets. Heck, you could have even profited from them.

Those bear markets didn’t appear from out of nowhere. There were plenty of warning signs. And the bear almost always gives you a chance to get away.

The rally we’ve seen over the past few weeks may just be your last chance to get out before the bear attacks. Let me explain…

Take a look at this long-term, monthly chart of the S&P 500, plotted against its 20-month exponential moving average (EMA)… 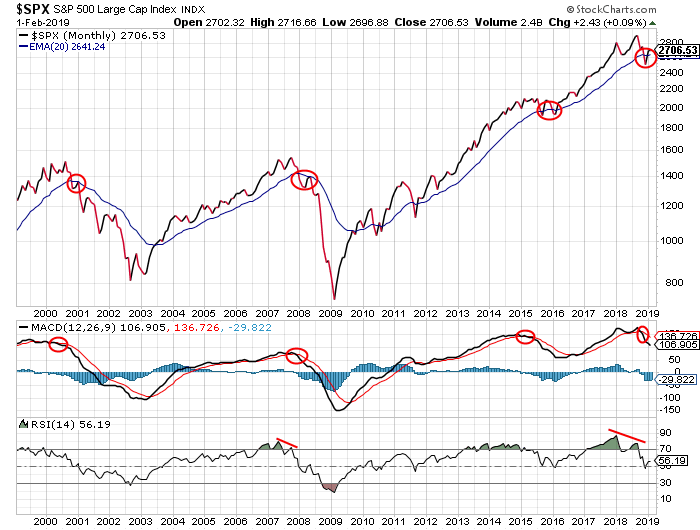 Longtime readers know I use this chart to define bull and bear markets. If the S&P is trading above the 20-month EMA, then stocks are in a bull market. If the index is trading below the line, then the bear is in charge.

The MACD indicator at the bottom of the chart provides one of the early warning signs of a bear market.

Notice how in 2000 and in 2007, the MACD indicator gave us that “bearish cross” from extremely overbought conditions. In both cases, the S&P 500 dropped below its 20-month EMA a few months later.

Of course, you’ll notice the S&P dropped below its 20-month EMA in 2010 and in 2011. But, in both of those situations, the MACD was more neutral than overbought. We didn’t get a bearish cross on the MACD in 2010. And in 2011, the bearish cross reversed just one month later.

So, we didn’t have the conditions necessary for a bear market.

We did, however, get a MACD “bearish cross” last September. The S&P 500 peaked that same month. And we entered a bear market when the S&P 500 closed below its 20-month EMA in December.

But, as I wrote earlier, the bear almost always gives you a chance to get away.

Look at the red circles on the chart in 2001 and 2008. The S&P 500 breached its 20-month EMA. Then it rallied back up to “kiss” the line from below. Those were remarkably strong rallies. Stocks bounced off of extremely oversold levels – crushing anyone who got too aggressive with short sales (and there were plenty of folks who made that mistake), and getting folks thinking that maybe the bull market was back.

That’s when the bear attacked.

Now take a look at the recent action on the chart.

The S&P 500 dropped below its 20-month EMA in December. Stocks were extremely oversold. And, as I warned last month, the market was setting up for an oversold bounce.

We got that bounce.

The S&P 500 rallied 300 points in January. It’s 370 points higher than its December low of 2332. Folks who got too aggressive with short sales in December are feeling the pain of a short squeeze. And, many of the financial television talking heads are proclaiming the correction is over and we’re back in a bull market.

The talking heads are ignoring the warning signs of a bear attack. What’s worse is they’re telling you to ignore them, too.

Granted, the S&P 500 did end January above its 20-month EMA. So, if we’re applying strict mathematical and scientific rules to this analysis, then we have to consider that the bear market is over and a new bull market has begun.

Remember, technical analysis is more of an art than a science. We’re dealing with human emotions – which are remarkably consistent but are prone to overshoot at extreme levels. So, we have to give this chart a little wiggle room.

Given that the black line on the MACD indicator is nowhere near crossing over the red line, I’d say the best action the bulls can hope for at this point is something similar to the 2015-2016 correction. You can see how the S&P chopped above and below its 20-month EMA a couple of times before the MACD indicator turned higher.

In other words, the best the bulls can hope for here is a several-month period of choppy, back and forth action near current levels. The worst they could see is a devastating bear market similar to what happened in 2001 and 2008.

For most folks, this is probably a good time to remember the old joke about two hunters who stumble across a grizzly bear in the woods.

One hunter stops, takes off his boots, takes his running shoes out of his backpack, and starts lacing them up on his feet.

The second hunter looks at the first hunter and says, “What the heck are you doing? You’ll never out run that bear.”

I don’t really like what I see in the market and have slowed my roll down to a crawl. I did make out handsomely on the [Delta Report] trade (thank you). But other than that, I’ve just kept my high conviction trades on and have been very reluctant to commit any new capital to this market.

I’m so curious to see if your insights play out.

I have had that exact sentiment for a few years now. And I mean EXACTLY the same thinking.

You are the first person to acknowledge that risk (that I know of) and I usually get laughed at when explaining my logic on this scenario. Excellent update. It needed to be said. Once again, you are the cogent trader. Thank you.

Thank you for putting into words what I have been feeling about the markets. I had that “What!?” moment yesterday as I watched the pathetic Fed chair turn 360 degrees from his lie a month ago…

I have used technical analysis and charting for a long time. Most times, it helps when something emotional becomes logical. The Fed will continue to force itself upon the markets. I thought maybe this time would be different with the “decision.” I guess that is what is most disappointing. Maybe the markets are not logical in the broad sense.

Thank you for your teachings and discipline that you are passing on to myself and your other students. Trading has been good to me and my family. I believe it will continue that way. Of course, maybe the computers might have the final say in that. That would indeed be a sad day.

Thank you again for all you do.

What’s your strategy for being “the first hunter,” as Jeff puts it? Do you think we are back into bull market territory?

And as always, send any other trading questions, suggestions, and stories to [email protected]. We read every email that comes through.