I was no exception.

You see, when I first decided to become a professional trader, I focused on fundamentals like logic and facts.

And my first fundamental trading strategy was quite straightforward – find companies whose share price was trading below their fair market value and buy them.

Sometimes this strategy worked. But most of the time, the hyped-up companies trading at crazy valuations continued to outperform… while the value stocks I picked did nothing.

I couldn’t believe that all my careful research wasn’t playing out the way I thought it should.

I quickly became obsessed with figuring out why investors would pile into some stocks, while completely disregarding others.

Eventually, I reached a conclusion that would change the way I trade…

I realized markets are perfectly irrational.

What truly drives markets are emotions… optimism and pessimism.

Sometimes, those extremes in optimism and pessimism coincide with mainstream economics. But often, market movements don’t align with conventional logic.

That’s when you’ll hear analysts say the move was “already priced in.” But that explanation wasn’t good for enough for me.

I wanted to know if there was a way to predict what a market will do before the news came out.

And that’s exactly where technical analysis comes in…

As a technical analyst, I believe human behaviour plays out in predictable patterns. I look for these patterns on a price chart to track the market’s price action.

Now, my career is full of market calls that seemingly fly in the face of conventional logic. And many of my colleagues have also made millions of dollars taking contrarian stances on the markets.

One of the most contrarian calls I’ve made this year was just before the Russian invasion of Ukraine.

At the time, oil was trading around $92 a barrel. My prediction, based entirely on technical analysis, had two parts…

First, I called for oil to trade into the $100 range. That’s the kind of prediction where mainstream economic logic and technical analysis happen to coincide.

It’s not a huge stretch to think that oil would spike in the face of geopolitical conflict. Especially if the aggressor in that conflict is one of the world’s largest oil exporters.

When I claimed oil would likely sell off sharply after breaching $100, some people called me crazy. 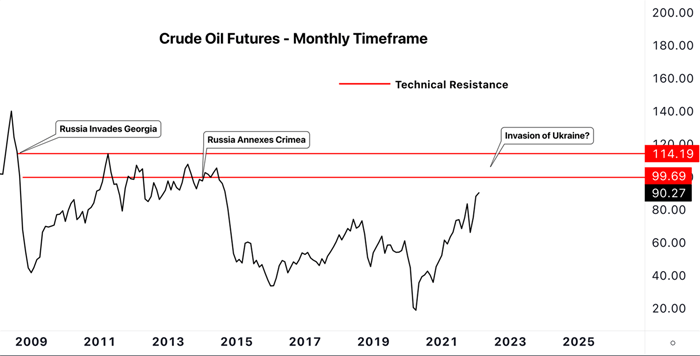 And here’s a current chart of crude oil prices… 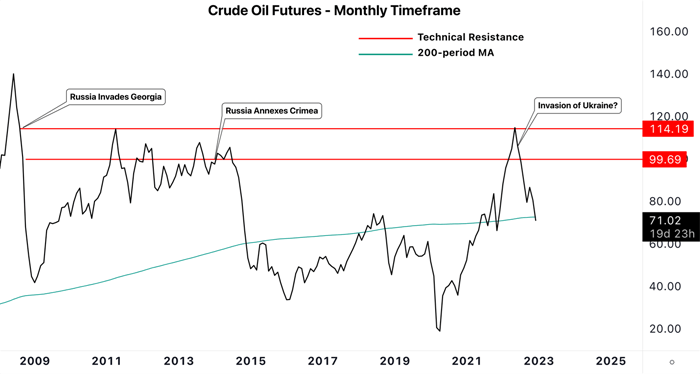 This is a significant support level in the market, and we could potentially see a rally in oil as a result.

Of course, not every forecast will work out this way. I get some market calls wrong, too.

But this shows why technical analysis is a superior discipline to fundamental analysis. It allows me to define my risk on a trade in a way that fundamentals just can’t.

On every trade I take, I also have a set stop loss, which is determined by identifying key levels on a price chart.

When I get stopped out of a trade, I consider myself very fortunate because I know that I got out at the right time. There’s no sense hanging on to a losing position… I’m simply out and free to focus on the next opportunity.

If my technical analysis gets me stopped out, then I’m out of the trade for a controlled and pre-determined dollar amount.

That’s the power of technical analysis. It allows you to identify great trading opportunities as well as pinpoint entry and exit levels.

If you’re looking to take your trading to the next level in 2023, you’re in the right place.

At Jeff Clark Trader, I’m hopeful that we can pass on our knowledge, experience, and views of the market on to you.

We have several advisory services to suit every kind of trader and investor. Whether you’re interested in trading forex or options, we have you covered.

I hope you’ll join us as we head into another exciting year of opportunity and profits.

How has technical analysis helped you become a better trader?