Long-term trends – like the rules of investing – tend to break when there’s a regime shift.

These new trends can last for years, if not decades.

So, it’s important that investors know how to recognize and adapt to these shifts.

According to S&P Global – the famed index and research provider for market barometers like the S&P 500 – a “regime change” is a shift in the interactions of various parts of the economic or financial system.

The far-reaching effect of the regime shift we’ve been writing about this year is starting to gain traction.

Interest rates have broken out and appear unstoppable.

On February 15, I noted “Gold and rates have been moving up together this year and will continue to do so.”

Then on March 11, I followed up with, “Treasury bonds have been in one of the biggest Fed-induced bubbles of all time… What we’re seeing unfold right now might be one of the most epic shorts in recent memory.”

You see, when an economic regime change occurs, the trends that unfold produce more than just short-term gains… they last for years.

One of the hallmarks of a regime change is when traditional economic relationships begin to break down.

In February’s essay, I noted how a multi-generational trend in declining interest rates was about to break… and that not only is this probable, but that certain traditional relationships (like the one with gold) wouldn’t work anymore.

Now, the market is confirming this.

Take a look at this updated chart from the March 11 essay. This breakout in interest rates looks like it’s only in its early stages… 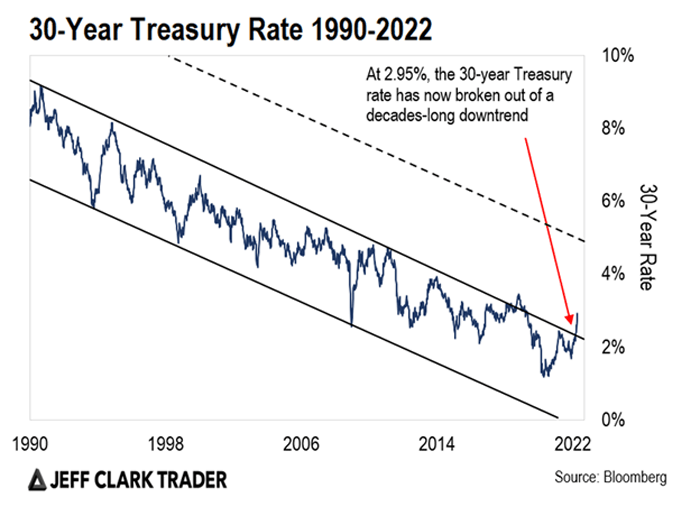 But I’m concerned that this regime shift has more reach than just breaking down the gold/rates relationship… Right now, bonds are falling with stocks – something I’m not sure the financial system is ready for.

The entire pension system – and many of the portfolio allocation models used by institutions – is predicated on the 60/40 principle. This principle states that 60% of a portfolio is allocated to stocks and 40% to bonds, or a variation thereof.

That’s because investors have grown used to seeing stocks get hedged by bonds during a weak market.

In fact, since we came out of the inflationary period of the 1970’s, all investors have seen is a market where both stocks and bonds rise.

This has led to diehard institutional allegiance to this style of portfolio management.

But the traditional “flight to safety” trade just hasn’t been there lately… when Treasury bonds rally when the markets turn weak.

Given this massive breakout in rates, I’m not sure where investors will get their returns in this environment. It certainly won’t be from traditional money managers who rely on principles like the 60/40 rule.

Investors should ask their money managers how they plan to deal with this changing tide.

But remember, we’re still in the early stages of this development. So, investors still have time to get ahead of this.

For now, continuing to short bonds through the iShares 20 Plus Year Treasury Bond ETF (TLT) is the easiest way to do it. Eventually, this ETF is poised to trade at all-time lows below $80 a share.

How do you allocate your portfolio? Are you worried about how an economic regime change could affect it?