Semiconductor stocks have had an amazing year. The PHLX Semiconductor Index (SOX) is up more than 40% in 2017. And individual stocks like NVIDIA (NVDA) and Lam Research (LRCX) are up almost 100%.

Solid earnings, strong growth in areas like artificial intelligence and autonomous vehicles, and the backdrop of a strong economy have helped fuel one of the strongest rallies the semiconductor sector has ever seen.

Now, though, the rubber band is getting stretched just a bit too far. It’s in jeopardy of snapping back. 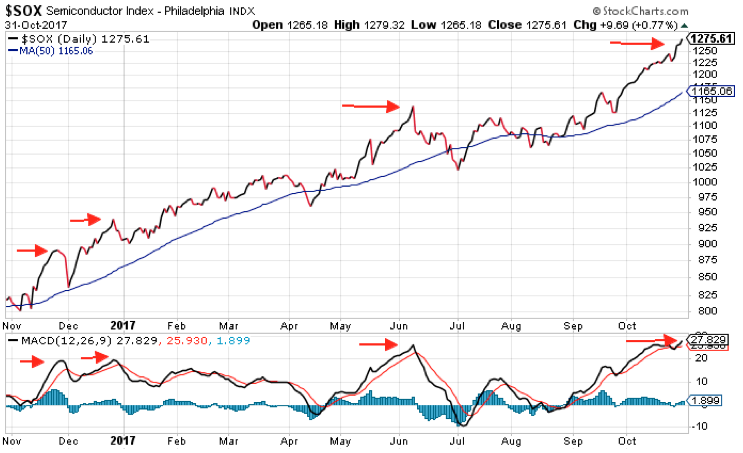 SOX rarely strays more than 7% above its 50-day moving average (MA) line. On the three previous occasions over the past year when the proverbial rubber band stretched more than that, SOX snapped back almost immediately. And two of those declines led to sizeable drops down to at least the 50-day MA.

It’s also worth noting that prior to all three of those “snap back” declines, the MACD momentum indicator reached extreme overbought levels.

Well… yesterday, SOX closed 9.4% above its 50-day MA. And the MACD indicator closed at its highest level of the year. In fact, this is the highest level the MACD for SOX has reached since November 2002 – which preceded a 20% decline in the index and a test of its 50-day MA.

I’m not suggesting SOX is on the verge of a 20% decline. But the rubber band is quite stretched. And the index could easily snap back 5% – or even a bit more – without doing much technical damage to the chart.

At the very least, the extended condition of SOX is going to limit any further upside from here. The best the semiconductor bulls can hope for is for SOX to just chop around for a few weeks and give the 50-day MA a chance to catch up to the current price of the index.

Investors who are looking to add money to semiconductor stocks should wait a while. You should be able to get in at lower prices in a couple of weeks.

Aggressive traders might consider shorting the sector in anticipation of the rubber band snapping back.

If you’re interested in learning about cryptocurrencies, including how to trade them and which ones have the biggest potential in 2018… all while earning some free bitcoin in the process… make sure you sign up right here.

Have you ever gone short on an overextended sector? How have those trades worked out in the past? Send in your past trading experiences, suggestions, and questions right here…