For this week… it’s all about Apple (AAPL).

Of course, we could argue the entire year has been all about Apple. It’s the largest company in the U.S. stock market. It’s the most widely owned stock. And, it’s led the stock market for all of 2020.

The market followed AAPL higher in January and February. Then, AAPL led the brutal decline in March. And, from its bottom in March to its peak on September 1, AAPL set the tone for the market’s rebound by gaining 145%.

Since then, though, shares of AAPL have fallen 16%. That’s dangerously close to the 20% decline that defines a bear market. And, if AAPL turns bearish, then the rest of the market won’t be far behind.

So, the action in this popular stock is important. And, based on the following chart, this is a critical week.

Take a look below… 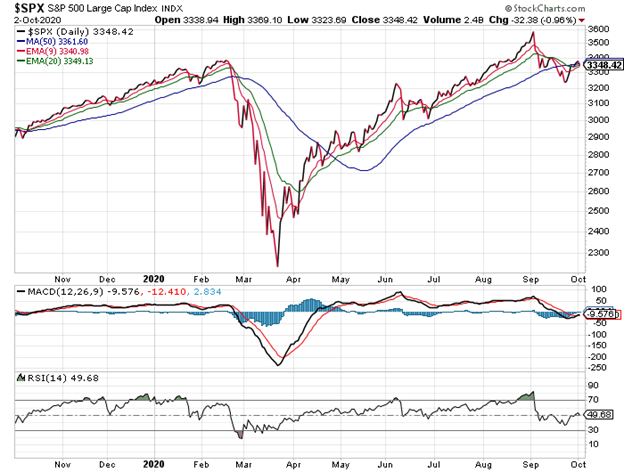 After several months of moving higher and expanding away from each other, all of the various moving averages (the red, blue, and green lines on the chart) have coiled together. This happens as a stock moves sideways and consolidates. It’s building up energy for the next trending move.

AAPL closed on Friday right in the middle of all of its coiled moving averages. There’s a lot of energy here. The stock is poised to make a big move in one direction, or the other, soon.

The moving average convergence divergence (MACD) and relative strength index (RSI) momentum indicators at the bottom of the chart are in neutral territory. They’re not offering any clues as to which direction AAPL is going to break.

Whichever way AAPL goes, the market is going to follow. Traders should pay attention to this chart this week. It will set the tone for the market in October.

If you own shares of AAPL, have you made any recent gains? If there was a proverbial coin toss, which way would you bet AAPL will go?

Send us your thoughts – and any questions you may have – to [email protected].