Andrew’s note: In today’s evening edition of Market Minute, billionaire financier and editor of Strategic Trader Dave Forest discusses his thoughts on how to secure a more stable retirement.

Not only that, but next Wednesday at 8 p.m. ET, he’s hosting a special presentation where he’ll reveal the biggest and most urgent opportunity of his career. He’ll go over how you could potentially make 49 years of profits in ONE year.

It’ll all be revealed during Dave’s first ever livestream event… Time is running out to sign up, so click right here…

At the end of every month, I sit down and figure out what I spent. I tally up food, gas, entertainment, and other costs of daily living.

I don’t have to do it. I’m not on a budget. But I find it interesting to see how much people spend to live.

This is the crux of planning for retirement. To figure out how much to save, you need an idea how much you’re going to spend.

According to the Bureau of Labor Statistics, the average household aged 65 or older spends $50,220 per year.

That’s the average. You might need more, or you might need less, depending on your plans. But that’s a ballpark target on what’s needed to be comfortable when you stop working.

So what does it take to pay for a year’s worth of retirement?

But here’s the problem: that’s cutting it a little close. Plus, the S&P isn’t a reliable year-in, year-out gainer.

That’d cover less than half the yearly spending for an average person in retirement. And 2020 was a mediocre year, too.

A Little-Known Strategy Fit for Billionaires

What really worries me, though, is the down years.

An average investor in 2000 to 2002 would have lost the equivalent of 1.5 years of retirement living expenses. That’s a devastating result.

I think the risk of losses on major stocks is one of biggest obstacles to people saving for retirement. I’ve spent years trying to figure out a safer way… without compromising upside.

Fortunately, I got that chance when I met John Pangere, my friend and co-editor at Strategic Trader.

John showed me his research on a type of investment called “warrants.”

Most investors have never heard of them. But they’re commonly known in the financial community. And in fact, their potential is so explosive they’re used by some of the world’s most prominent investors… including Warren Buffett.

Regular readers know I’m a geologist by trade. And commodities are my bread and butter. I’ve used warrants many times as part of investments I made in mining companies.

In fact, I’ve even issued warrants to billionaire investors in companies I created in the past.

But John showed me ways to use these little-known securities to invest in some of the biggest, most mainstream sectors of the stock market.

And it can have a massive effect on your retirement savings.

To illustrate this, let’s look at the performance of a real-life warrant for a company called Purple Innovation (PRPL). It’s a very basic business. It sells mattresses.

We recommended this warrant to our Strategic Trader subscribers in early 2019. And our readers cashed out in October 2020 for a 4,942% gain.

The really amazing thing is those gains happened in under a year. And you don’t need a lot of money to have a big impact.

Readers could have gotten in on the Purple Innovation warrants for as little as 19 cents. A simple $1,000 investment would have turned into $50,421 in less than a year. That’s enough to cover a year of living expenses in retirement. 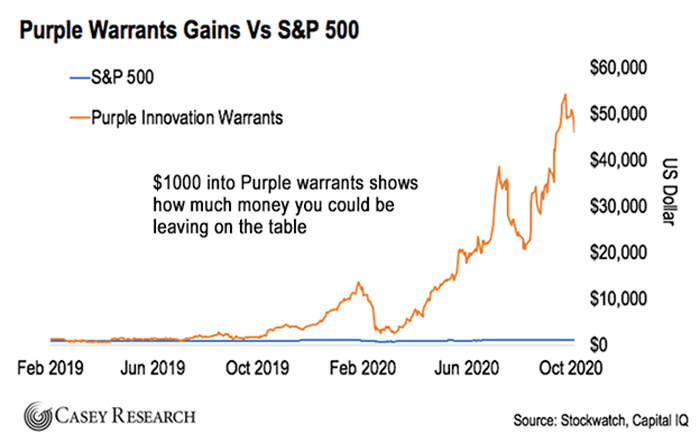 But here’s the best part…

The past year was a tough one for the stock market. But even if stocks had taken a 38.5% shellacking like in the 2008 crash, you’d have only lost a measly $385 on your $1,000 investment in Purple Innovation warrants.

You might have to cut back on Starbucks lattes for a month or two. But it wouldn’t affect your ability to cover rent, food, or other necessities.

This shows the power of warrants for the average investor looking to grow their savings for retirement… without risking it all.

When people hear this, they sometimes think I’m cherry-picking an exceptional case. After all, there are some rare stocks that return 1,000%+ gains to investors.

But with warrants, these outsized gains are much more common than with regular stocks.

Another of our Strategic Trader recommendations, Blink Charging warrants, gained 2,805% in five months. That’s enough to turn a $1,000 investment into $29,050.

And I’ve recently uncovered an opportunity to ride along Jeff Bezos’ coattails… on, yes, you guessed it, a warrants deal.

I’ve never seen a deal with the potential to make my readers as much money as this… ever. I believe those of you who get in before mid-November will be able to make 49 years’ worth of profits… in one trade.

It’s an opportunity so historic that I’m holding my first event on Wednesday, October 20 at 8 p.m. ET to get the word out.

It’s called the “Zero to Retirement Summit.” And if you join me… I’ll give you all the details when I reveal Amazon’s next target.

Warrants trade just like regular stocks. You don’t need a special account – or insider knowledge – to buy them. You just plug in the ticker symbol like you would with any stock.

You can even buy warrants through most online discount brokerages.

This is the retirement answer we’ve been looking for. It combines the high upside potential of specialized stocks… with the ease of mainstream indexes.