Once again, it’s all up to the banks.

Over the next two weeks, most of the major money center banks are scheduled to report earnings.

That’s not a new concept, by the way.

We watched the bank stocks three months ago as they were all lined up to report earnings.

Back then, expectations were poor. The bank stocks and the stock market had been declining. And, my contrarian nature had me leaning optimistic for a surprise upside move.

But it didn’t happen.

For the most part, the bank stocks sold off following their earnings reports. And the broad stock market sold off along with them.

Bank stocks have been weak heading into this reporting season. The KBW Bank Index (BKX) is down 13% over the past month, and trading near its low for the year.

Expectations are low. Just about all the financial television talking heads are leaning bearish for the sector.

And my contrarian nature has me wondering if we’re due for an upside surprise.

Take a look at this chart of BKX… 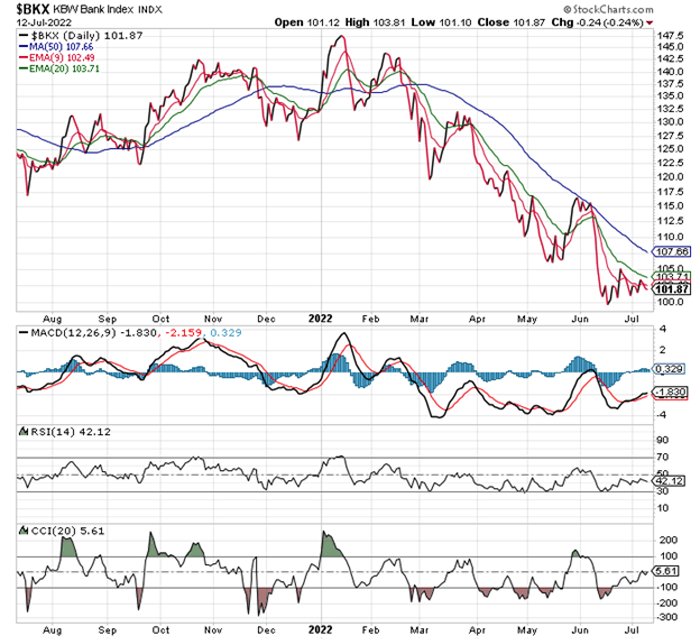 The banking sector has been in a strong, steady downtrend since it peaked in early January.

BKX is down about 30% since early January. And, so far, there isn’t any evidence that trend is ready to change.

But there are some positive signs in the short term.

While BKX has recently dropped to a lower low for the year, the technical indicators at the bottom of the chart (MACD, RSI, and CCI) are making higher lows.

This is the sort of “positive divergence” that often signals an impending change in trend – from bearish to bullish.

The upcoming earnings reports could be a catalyst for that shift.

Let’s face it, most investors aren’t looking for positive announcements from the banks.

The yield curve has flattened… loan demand is down… and with the poor stock market action this year, trading revenues are likely to be lower as well.

The weakness in the bank stocks is already discounting all that bad news. So, any hint of good news could inspire an oversold rally in the banking sector.

And if the banks start to rally, then the rest of the stock market should follow along.

On the other hand, if the banks fail to rally in reaction to their earnings reports, then this is going to be a tough earnings season for the rest of the market as well.

My limited view on this Eric is that six months ago we had a major risk coming from Evergrande. Like the “Lehman Moment,” the problem didn’t happen when the system crashed, it happened 9-12 months before that. And we are close to that impact.

Evergrande has spread, and in a lot of Chinese cities, companies are in trouble. It could now implode… look at the Chinese government pilling up the saving lines to everybody. It’s not a good sign, and when it implodes it’ll be much larger than China. Could we avoid that iceberg with all its collaterals? We will know by Christmas.