Wild swings in the market are about to become the norm… and not only because of the Omicron variant.

This variant is concerning, but here are two things that have me cautiously optimistic:

First, according to Bloomberg, Pfizer expects its vaccine to still be effective and hold up to the variant, and the supporting data will be available in about three weeks. Second, GlaxoSmithKline said its antibody treatment was effective in early testing.

As we said in our essay from Tuesday, “…the information gap will close as more data comes in. That means we could be facing some wild swings in the markets… higher and lower depending on the tone of the news.”

The market is now falling, rising, and falling again about 1-2% within the day.

Investors should get ready for this kind of volatility – it may get even worse.

That’s because underneath the selloff from Omicron, the Fed has just admitted a potentially disastrous policy mistake on inflation…

At a Senate hearing the other day, Jay Powell casually mentioned that we can now “forget the word transitory.”

After months of calling inflation transitory, Jay Powell has admitted the Fed got this one wrong.

That means a shift in Fed policy is underway.

There are two things that put the brakes on market gains: an economic shock like COVID–19 or a hawkish Fed pivot.

The inflation the Fed took a heavy hand in fueling may now be at a point where they simply can’t do anything about it… other than crash the economy by raising rates above the rate of inflation, as Paul Volcker did in the 1980s.

Even though they claim to be data-driven… it looks like they’ve been simply ignoring the numbers.

After all, they’re simply “ivory tower” economists looking down at things from way above, but real inflation happens down where regular people live.

Inflation happens every time we fill up our tanks, feed our families, or pay for rent (we saw this in the beginning of the year and called inflation the trade of the year).

But only a couple of months ago it was the price of used cars.

Simply put, they’ve been trying to downplay these inflation reports as “one-offs” – talking down what we and other investment managers have been seeing as an underlying trend.

But something else that’s just as concerning as his about-face on the transitory nature of inflation is Powell mentioning that the Fed tapering may be moved months ahead of schedule.

At this point it’s common knowledge that the Fed is one big money printing machine… and easy money is a big part of gains in the stock market.

Since investors tend to exhibit herd behavior, when the shepherd (the Fed) runs for the hills… guess what the sheep are likely to do?

Every trader and investor needs to pay special attention to this one.

An official Fed pivot may mean that the downside we’ve seen in the market lately is just the beginning.

So, let’s revisit the chart we shared with you on Tuesday where we called the 4660 level as a major resistance point. The market tried to close above it on Monday and then again on Wednesday – both times it failed. 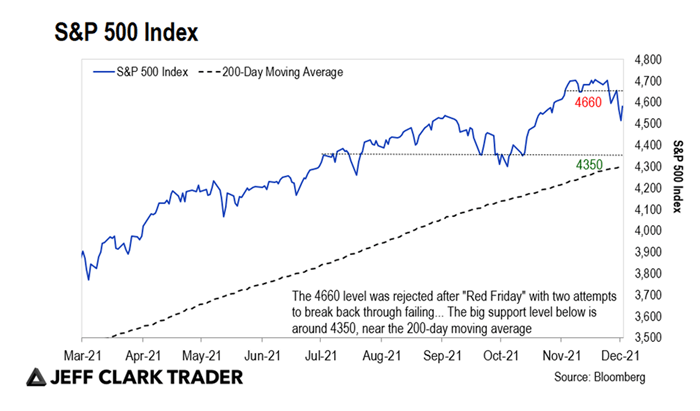 We haven’t hit the 200-day MA since June of 2020. Historically, the index touches that average much more frequently than every 18 months! So, let’s just say it’s been a while.

And a hawkish Fed policy shift could be the trigger to get it there.

For right now, as long as the S&P 500 keeps trading under 4660… downside bias in the market should continue to prevail.

In today’s mailbag, Randy shares his thoughts on the new variant from Eric’s Tuesday essay…

Viruses always mutate with weaker strains as a result. Doctors have known this for years. Now with winter approaching, how many normal flu cases will be labeled as new variants to continue to scare the ignorant masses and line the pockets of Fauci and Big Pharma?

Just like the fireman/arsonist aspect when they start the fire then put it out to be the hero. The NIH helped create COVID–19 in order to create a pot of gold for Big Pharma buddies and destroy free society.

If this gamesmanship continues, it’ll wreak havoc on society and our markets. Sad period of time, but just follow the money trails to get an eye opener.