And although the market gave us a buy signal a few weeks ago, last week’s selloff has now invalidated it…

Volatile times like these show us how crucial it is to be a flexible trader.

I’ve often seen too many traders stick to an idea long after it has turned sour.

You see, to some investors being right is more important than being profitable. But this almost never ends well.

To be a successful trader, you shouldn’t care about being right. You should care about making money.

And the only way to consistently make money in this business is by cutting your losses and letting your winning trades run.

So, today I’ll walk you through an updated price chart of the SPX. I’ll discuss why we might reach lower levels before ultimately finding a bottom.

Let’s look at the SPX chart below… 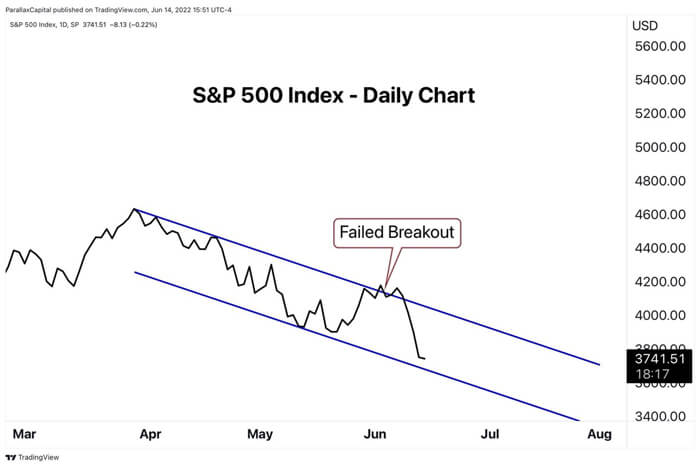 Currently, the market is trading within a descending parallel channel. This pattern is within the same family of setups as a falling wedge.

It’s a reversal pattern that eventually leads the market to higher levels.

And this led the market to its current selloff.

Think of it this way: the market is like a sprinter with a giant rubber band around their waist.

Meaning, the sprinter can only run so far before the rubber band pulls him back.

If the market tries to sprint at full speed but fails to make much headway, then the snapback of that rubber band is going to be even more forceful.

On the chart, you can see this failed breakout and its aftermath.

It’s now more likely the market will look for support near the bottom trendline of this channel.

Right now, the corresponding price level of that trendline comes in around 3674 in the SPX.

The bottom line is that there’s no rush to buy into this market.

I’d wait for another breakout above the upper line of the channel near 4040 before turning bullish again.

In today’s mailbag, Market Minute reader Peter shares his thoughts on the government…

I’m sorry to say our government’s moves are killing the middle class. I’m buying physical gold and silver bullion because our government scares the hell out of me.

The best you can do is pay off your house, cars, and credit cards to survive. There are layoffs coming. So, the rich will get richer and the middle class will be poorer.

And the poor will be left to their own thoughts. We’ll be a two-class society. I’m willing to bet you won’t print this for all to read.