This isn’t the first crisis that the markets have had to weather.

It certainly won’t be the last either.

After all, history does repeat itself.

To show you what I mean, here’s an old story involving Wall Street legend Art Cashin…

When Mr. Cashin was a young floor trader during the Cuban Missile Crisis, he learned that the Soviets had launched their nukes and they would hit the U.S. in minutes.

So, he desperately tried to build a short position. Several minutes later, when the nukes didn’t strike, he went to his boss to tell him what happened.

Upon learning that Mr. Cashin was trying to short the market, he gave him an invaluable lesson…

His boss told him that in the future, if he thinks the world is going to end, the right trade is to buy the market… not to sell it.

Because if it’s the end times, then there won’t be anybody to settle your losing trade. It’s far more likely that whatever might have been the cause for the initial panic will sort itself out… one way or another.

After all, the world can only end once. Life will go on and so will the markets.

And it’s with this sentiment in mind that I’ll be walking you through my analysis for the S&P 500 index (SPX).

The last time I wrote about the S&P 500 was on January 19. Back then, my analysis suggested that SPX had broken out of a bearish chart pattern known as a rising wedge, and that prices were likely to go back to at least 4306.

While the pattern worked out as expected, the index did overshoot the target slightly… with the SPX closing as low as 4182 on February 23.

Now that this chart pattern has finished playing out, I’m ready to turn bullish once again. Interestingly, we have the mirror image of that January pattern taking shape right now. 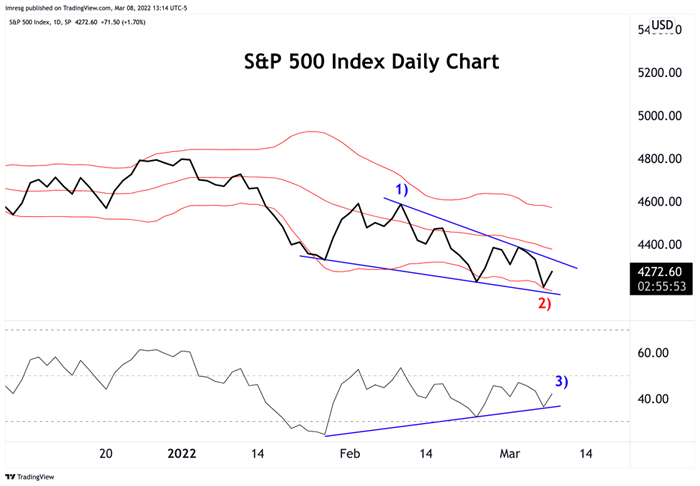 There are three important things going on in this chart:

By piecing all this technical evidence together, it strongly suggests we should be on the lookout for a market bottom.

And, just like with gold, I think this could be one of those “blink and you’ll miss it” scenarios.

However, it’s important to know when this specific scenario is no longer valid.

If we break out of the bottom of this wedge, then we’ll have to take a step back and return to the drawing board.

With the current global events, where do you think the market is heading?