Eoin is a fellow trader who looks at many of the same indicators I do. He uses a technical approach to market timing, and he pays close attention to market interrelationships. In other words, he notices how price action in one asset might affect price action in other assets.

I’ve been following Eoin’s work for the past several months. He’s interesting, entertaining, and – perhaps most important – accurate.

Today, Eoin writes about one of the hottest assets of the past year – bitcoin – and what level he thinks traders should cash out…

I’m not a cryptocurrency missionary. I’m not going to tell you to hold on forever. I don’t know how the sector is going to evolve, or which token is going to eventually prevail – if any of them do.

I’m only interested in cryptocurrencies because I can make money trading them. And I’ve come up with a system to determine when to take profits and when to buy back in…

I’ve traded all kinds of different markets over the years. And if it’s taught me one thing, it’s that one of the most consistent things in any trend is the size of the pullbacks… no matter which market you’re trading.

You see, in any uptrend, traders always try to buy the dip. And the only way to figure out how much of a dip to wait for is by looking at what happened last time.

If the market previously pulled back 10 points before rallying back, the logical thing to do is to wait until it pulls back by 9. That’s when you buy. And the more people looking to buy the dip, the greater the chance of similar-sized pullbacks.

But if the market pulls back 11 points – look out. That’s the time to start selling on any future rallies.

A much bigger pullback after a big advance is seldom good news. It’s often topping activity.

Until that happens, buyers will buy all day, all week, and all month as long as the pullbacks stay smaller than the previous ones. But when that stops, and the gravy train reaches the station, they leave.

Now, let’s take a look at where bitcoin is at today…

Since the March 2020 low, bitcoin has posted seven good-sized pullbacks. Until last week, all were smaller than 20%.

The peak-to-trough swing between the high on January 8 and the low on January 21st was 31.36%. That’s a much bigger drawdown than any we’ve seen since March 2020.

Since the peak, bitcoin has been quite volatile. Bulls will rationalize the loss of consistency by saying that the difference from close to close was only 16%. But, bears will say that the price is now way above the cost of producing new coins (when mining is more profitable, more coins are being produced – causing a supply influx which weighs on prices).

But, the important thing to remember is what people say is less important than what they do. If the trend is still intact, and has further to run, the January 21st low just above $28,000 will hold. This is more than a wobble. The bigger pullback tells us something has changed in how the crowd looks at bitcoin. With the loss of consistency this month, traders should have stops in the market now.

So, when would I look to buy back into bitcoin?

As someone with a long position, $30,000 is a place where I might consider buying more on this dip. Crypto bull markets are very exciting and they can surprise on the upside. I don’t like chasing, so my strategy is to buy on weakness. However, I will only do that as long as the trend is intact. If the price falls below $28,000, I’ll take my profits and walk away.

While bitcoin is known for massive gains, it’s just as common to experience dramatic drops that can scare most investors into selling. 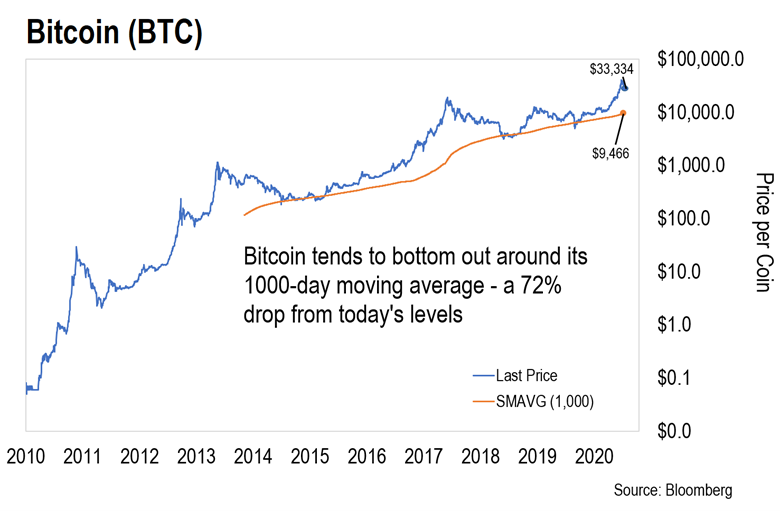 After the last two phases approached bubble territory, the price of bitcoin (the blue line) collapsed back to test the 1000-day moving average (MA – orange line). That MA is at $9,466 as of this writing – a 72% drop from today’s prices. That’s why I have a stop on my position at the $28,000 level.

And, when this phase of the big crypto bull market rolls over, I’ll look to buy somewhere around $9,000 based on where the 1000-day MA is right now.

P.S. Thanks for reading – I’m excited to start regularly contributing to the Market Minute, and, I’d love to know, how are you feeling about bitcoin? Will you buy the dip?

Please don’t hesitate to email me with any questions, or any particular sectors you’d like me to cover. Just write me at [email protected].