The market is set up for an exemplary earnings season…

But there’s a problem.

Prices have gotten ahead of themselves. And in my view, prices are already reflecting better-than-expected earnings.

Not only that, but right now, 144 companies are actually trading ABOVE analyst estimates.

In other words, investors are getting a warped view of earnings expectations from the recent price runup in the market. And those expecting another jump higher during earnings season might get a nasty surprise.

So today, I’ll share a little-known valuation metric that should give you a clearer picture of the market’s direction… And allow you to sidestep the volatility I believe is coming up.

Tuning Out the Market’s Noise

The main indicator you need to watch as we head into earnings season is the Cyclically Adjusted Price-to-Earnings (CAPE) Ratio.

Unlike regular price-to-earning (P/E) ratios – which measure the price of a stock relative to its earnings at a given point in time – the CAPE is cyclically adjusted. That means it smooths out the effects of recessions by averaging out earnings over a 10-year span – making it a good tool for historical studies.

In this way, the effects of economic shocks on earnings (like the pandemic) get absorbed into the average. The CAPE ratio also removes inflation from prices, leaving us with real returns. It tunes out all the “noise” of the market and gives you the real picture. 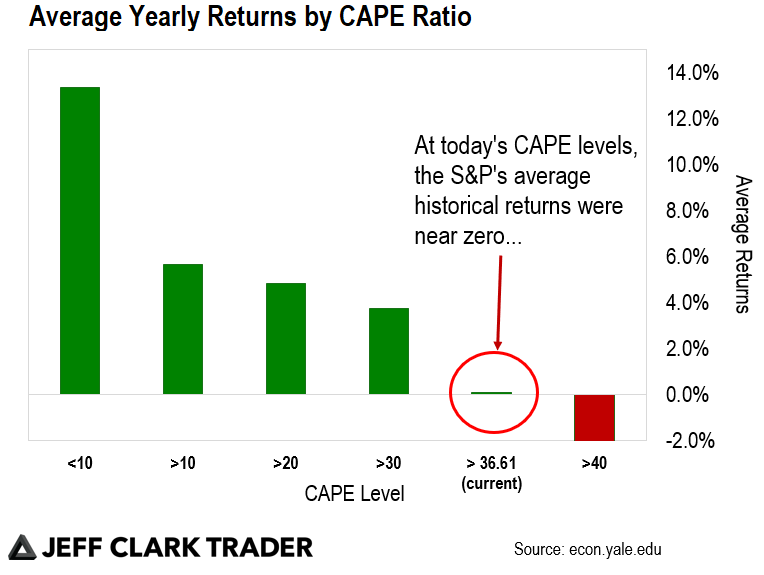 This chart shows the average yearly return of the S&P 500 at various CAPE ratios. And based on this data, investor expectations at these levels should be tempered at best.

We are currently at 36.61 CAPE. That’s high… And it implies that – statistically at least – investors have already been rewarded by higher stock prices.

Now, there are those who will say technology is changing everything… And because of that, “it’s different this time.” Others justify these levels based on the zero interest rate policy from the Fed.

The bottom line is… Stocks are expensive. And, if you’ve been reading Jeff Clark’s work for a while, you know extreme valuations tend to return to the mean.

As we noted in last week’s essay, the market has been racing higher on infrastructure headlines and easing off of interest rates. But when the market runs so far away from average prices, there’s not much more that a positive earnings season can do to push prices higher.

Why Patience Will Pay

To close, I want to share a bit of technical evidence for why this earnings season may disappoint, at least from a price perspective…

For the last 100 earnings seasons, the market has averaged almost a 17.5% annualized return from the start of earnings season to the end (about a four- to six-week stretch).

But those returns fall to a 7.5% loss when the market was 10% above the 200-day moving average at the start of earnings. It’s 15% above that level now. So in my view, expecting further upside momentum is unreasonable. It’s much more likely that we’ll see another patch of volatility.

This is one of those times where it’ll pay to stay patient and let the market come to you. There are a lot of companies and sectors I want to buy into – mainly in the small cap industrials and materials space – just not right now.

Even though the infrastructure bill is around the corner, along with a fast recovering economy, the market has likely already priced these variables in. That means cyclically-adjusted valuations like the CAPE ratio are an important metric to watch.

I’d like to see the CAPE ratio for the S&P 500 fall to its longer-term average around 30-31 before putting any new money to work.

When have you seen gains by being patient with the markets? Did it pay off in the long run?